MEMORIES OF '86 (some text hidden)

Toyota says its engaging GT86 coupe has been 'fundamentally revised' with sharper dynamics and a smarter interior. As before, this remains a simple, rear-wheel drive package designed to give the person behind the wheel a good time. Jonathan Crouch reports.

If you thought involving affordable sportscars belonged back in history, then you'll find Toyota's GT86 a welcome breath of fresh air. Developed and desired by enthusiasts, it remains a benchmark in the compact coupe sector, a masterclass in driving dynamics. Now, it's even better.

The GT86 formula is simply classic: a snarly, high-revving four-cylinder engine in the nose, rear-wheel-drive, 2+2 seating, a swoopy body, a stubby gearlever and a cosy cabin with low-slung sports seats. Subaru's version of this design, the BRZ, is mechanically identical but looks a little different, plus there is a third version for the American market called the Scion FR-S which has been subtly altered again. Common to all the variants however, is a 197bhp, 151lb ft flat four engine that uses a Subaru block and Toyota-designed cylinder heads that's been designed to spin to 7000rpm and direct its output to the road via a six-speed manual gearbox - though auto transmission is an option. So it's Old School with a modern execution - and remains so in the much improved guise we're going to look at here with its smarter cabin and uprated drive dynamics.

Differences with this improved model include revised suspension that improves corner turn-in and further enhances the original version's keenness of response, agility and its ability to adjust the cornering attitude as much with the throttle as the helm. Another key change lies with a freshly-added selectable 'track' mode that lets the driver tap into the GT86's full potential by adjusting the level of stability and traction control, including a 'fully off' option. Under the skin, the body structure has been made stiffer, and the Showa shock absorbers have been retuned for better handling and ride comfort. The 2.0-litre Boxer engine beneath the bonnet remains, as does the relatively light 1,180 kg kerb weight which might lead you to expect the GT86 to make rather more of its 197bhp and 151lb of torque than the estimated headline performance stats of 140mph and 0-62mph in 7.6s suggest. But this car isn't just about raw power. Its lean kerb weight plays just as big a role in the way it handles and rides. A limited slip differential is also fitted as standard, reaffirming GT86's essential 'driver's car' character. And, in this respect, all the ingredients look especially promising: quick steering and relatively low-grip tyres ensure that outright traction never overwhelms the desire to play the angles, should the driver so wish. Back-to-basics fun was always at the heart of the brief for this car. Disappointments? A short-throw gearchange that's a tad notchy and a six-speed auto option that, while smooth, lacks the snappy alacrity of the best double-clutchers. But that's about it. 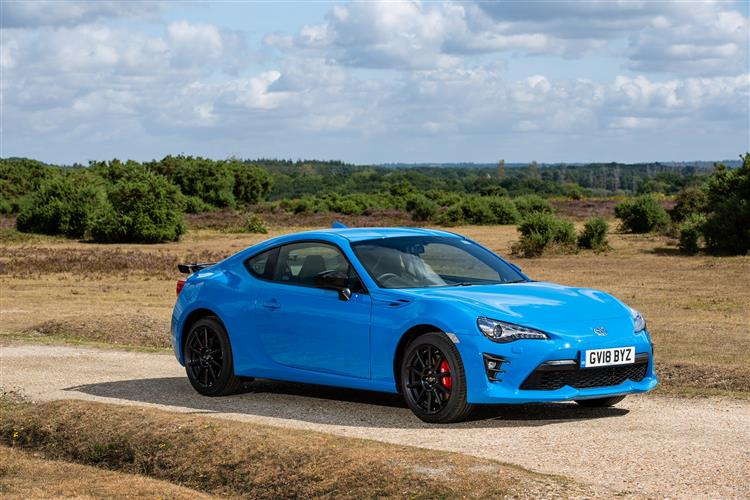