Range Rover's Evoque has demolished all sales records for SUVs in this class. Jonathan Crouch reports on how the latest MK2 model aims to stay in the top spot.

How do you right a best seller? That was Land Rover's problem when it came to creating the second generation version of its runaway success story, the Range Rover Evoque, a car that now accounts for a third of the brand's total sales. It's a fashionable, yet capable proposition that has fundamentally changed the premium mid-sized SUV market and rivals now have to contend with an evolved version that features a more efficient range of diesel and petrol engines, including electrified and mild hybrid technology. Plus there's smarter styling, more interior space, extra off road ability and sharper handling thanks to an all-new 'PTA' platform. As a result, if you want an SUV of this kind, this is still the one to beat.

It's getting on for half a century since all-wheel driving was revolutionised by the Range Rover, a car now a class apart in the luxury 4x4 sector. But what would that model look like re-invented in smaller form for very different Millennial times, an age in which fashion and frugality are as important as toughness and traction? Something like this we think, the Range Rover Evoque, here rejuvenated in second generation form. As before, it sets out to meet a daunting set of challenges, aiming to provide luxurious room for four in a shape shorter than a Ford Focus. Along with handling as satisfying as a sports coupe. And economy that might allow green-minded versions to rival the returns of a citycar. All to be delivered with class-leading off road expertise. In a car right for its times. Quite a build-up. Quite a car? Let's find out.

The Evoque range is primarily focused on Ingenium four-cylinder units. All automatic versions of this model, regardless of whether they're diesel or petrol, will have a 48-volt mild hybrid system equipped with an 8Ah lithium-ion battery. The petrol derivatives produce 200hp (P200), 249hp (P250) and 300 (P300), while the diesels develop 163hp (D165) and 204hp (D200). Your dealer can offer you a manual gearbox available on the entry-level front-driven diesel, but the remainder of the models in the range will come with the brand's latest nine-speed automatic. A less powerful three-cylinder 1.5-litre turbo petrol powerplant features in the alternative P300e PHEV petrol model mated to an eight-speed auto gearbox. This plug-in hybrid variant's engine puts out 197bhp, its efforts further aided by a 107bhp electric motor mounted on the rear axle which delivers AWD capability and creates a total system output of 296bhp, with 540Nm of torque. The electric motor is powered by a 15kWh lithium-ion rechargeable battery pack. As before, all but the most basic Evoques will come with 4WD but their transmission features a 'driveline disconnect' feature which will see the car default to a front-driven configuration unless a loss of traction dictates otherwise. An 'Active Driveline' system will be optionally available, which uses a rear-mounted double-clutch which offers torque vectoring on the rear axle to aid corner turn-in. Off-road ability is enhanced with the fitment of 'Terrain Response 2' tech from the larger range Rover that analyses the road surface and adjusts the transmission to suit. Wading depth is up 100mm to 600mm too. 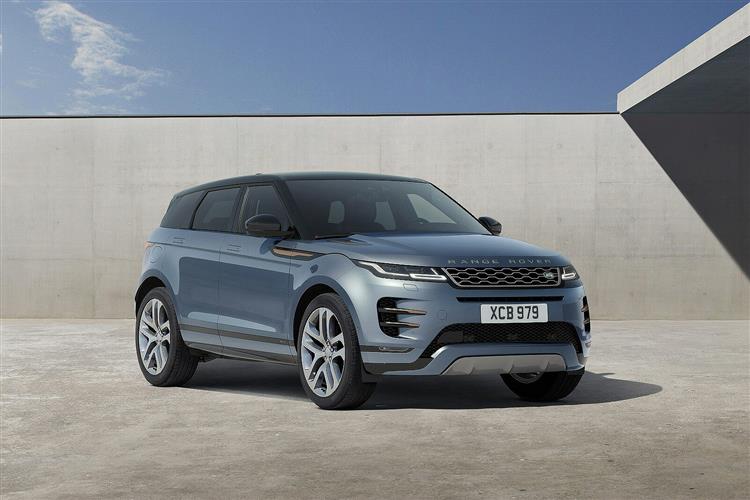