The Mulsanne is the best super luxury saloon Bentley knows how to build. Jonathan Crouch wonders if this improved version might be the best of them all

Bentley's flagship, the Mulsanne, is a car in which old-style opulence meets the modern world in a design which at last prioritises the driver involvement that the brand's pre-war models were once famed for. More dynamic than a Rolls Royce, more luxurious than a Mercedes Maybach, this revised model claims to be the definitive super luxury saloon.

The Mulsanne model we first saw in 2010 was an important car for Bentley, the first of the brand's modern-era cars that owed nothing to a Rolls Royce sibling or a Volkswagen Group engine. The Volkswagen Group-owned company resisted serious pressure to water this car's design down with the platform of an Audi A8, determined that, like the Bentley 8-litre of 1930, the last 'proper' fully Crewe-conceived representative of the marque, this Mulsanne's design should owe nothing to any lesser car. They'd watched Maybach try - and fail - to take on the Rolls Royce Phantom with a glorified Mercedes S-Class. And rivals Rolls Royce enjoy only limited success with a Ghost model based on a BMW 7 Series. With this Mulsanne, this British brand wasn't about to make the same mistake. So everything about this car is bespoke, unique and very, very special. All of that remains with this revised, re-styled model. Which is as it should be in a vehicle that may very well be the finest motorcar that money can buy.

The first signs are good, that characteristic deep muffled V8 burble very different from the W12 unit that lesser Bentleys borrow from the old Volkswagen Phaeton. The standard and Extended Wheelbase models offer 512PS, while the Speed version boosts that to 537PS. Either way, a car of this kind is defined not by its output but by the pulling power it can offer - as you realise very soon after you bury your brogues into the deep pile carpet and watch the horizon hurl itself towards you. Quite simply, this Mulsanne has an astonishing amount of it, one of the very few cars anywhere in the world to offer four figures of torque, 1020Nm to be precise, even in the standard version. That's 50% more than any other Bentley - or for that matter any other Rolls Royce - can manage. Power is sent to the rear wheels through an 8-speed ZF automatic gearbox that comes complete with wheel-mounted paddle shifters. Be quick with them and you'll flash by the sixty mph mark in just 5.4s, at which point thanks to clever Cam Phasing, your engine will be doing little more than just turning over, revving at less than 1,500rpm. Prod the throttle down just a little bit further and it's like being in a 747 on take-off as you whistle through the 100mph barrier just six seconds later on the way to a maximum that those owners with private airfields and test tracks will realise at 184mph before they have to frantically exercise the enormous twin-booster braking system. At first, you're rather hesitant to use all of this performance, but such fears are groundless. This is, after all, a brand that has rediscovered a motorsport heritage that runs to no fewer than six Le Mans victories. It's even named after the most famous corner at the classic French track. It ought to be able to handle the twisty stuff in a way that would embarrass a stately Rolls Royce. And it can. Nothing of this colossal weight that's over 18-foot long is ever going to be truly agile of course, but the accurate, responsive way you can thread this car through the bends of your favourite B road is truly awe-inspiring. It must be a frightening thing to watch. Credit for this is down partly to the super-stiff bodyshell, but is mainly due to the Mulsanne's electronically-controlled air-suspension set-up which, thanks to Continuous Damping Control, can reduce the car's ride height at higher speeds to reduce lift and improve aerodynamic stability. The system constantly monitors and adjusts damping levels within parameters set by the Drive Dynamics Control. Through DDC, owners can select Sport or Comfort modes to tailor the suspension and steering set-up to their requirements. A third 'Bentley' mode is a pretty effective compromise between the two, but if you don't agree, then a final 'Custom' setting allows you to set the parameters for yourself. 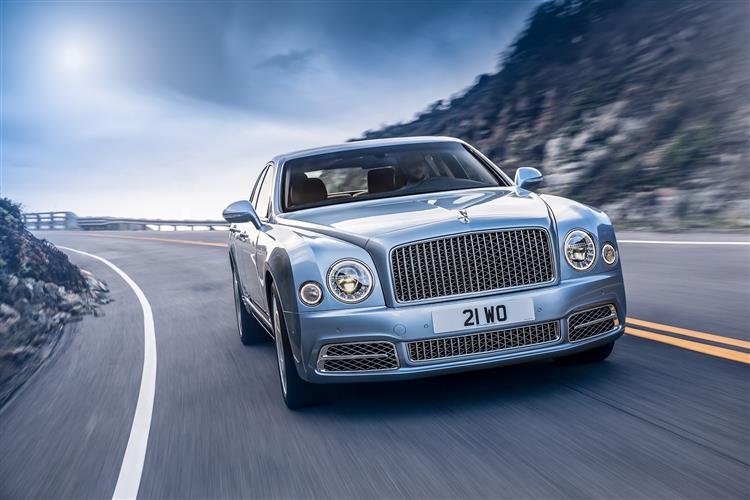