Few brands have dabbled in a wider range of products than Mitsubishi over the years. From huge SUVs and wild rally replica performance cars to models like this, the all-electric i-MiEV, introduced in 2013 and sold for just three years. This was one of the very first proper all-electric models to make it to the UK market but pricey asking figures restricted its sales impact. Mitsubishi's i-MiEV customers reckoned though, that the car paid for itself in the cost savings it generated. But does it make sense as a used buy? Let's see.

Intelligent Motion. Almost every automotive brand, it seems, has its own idea of what that little slogan means. For some, it's hybrid power. For others, hydrogen cell technology. Others still feel that there remains much to do in pursuit of making conventional petrol and diesel engines that much more efficient. All agree on one thing though. That 'pure electric' fully electric vehicles will have a major part to play in our motoring future. And the car we're going to look at here was one of the very first such vehicles to market, Mitsubishi's i-MiEV. When in future decades, we look back on how full electric motoring first began, this is the car that will be wheeled out, significant not only for the Japanese brand but also for Peugeot and Citroen, who in this period both produced EV products sharing exactly the same design (the Peugeot ION and the Citroen C-ZERO). The MiEV was derived from an existing conventional petrol-powered citycar, the Mitsubishi i, introduced here back in 2007 having been originally created to suit Japanese K-car regulations which promote smaller, more efficient cars in return for tax and insurance perks. An all-electric version was the ultimate K-car solution for Japan's smog-laden city streets. Whether it would work as well in Western Europe was another question of course, especially at the kind of prices demanded by the necessary lithium-ion battery technology. There was also tough all-electric competition for this i-MiEV, not only from the comparable Peugeot and Citroen models but also from Nissan's larger all-electric LEAF and the 'E-REV' or 'Extended Range Electric Vehicles' on offer in this period from Vauxhall and Chevrolet. It sold in tiny numbers and was finally deleted from the Mitsubishi range in late 2016.

What You Getword count: 503

This i-MiEV was an electric version of the Mitsubishi i citycar, a design dating back to 2006. Fortunate then, that the looks of that original model were futuristic, meaning that this one didn't look in any way dated. It's clearly a little sub-supermini citycar, if a rather high-sided one. At 3.5m in length, it's more akin to a tiny hatch like a Peugeot 107 or a Citroen C1 in size than any Fiesta-sized supermini, though the 1.6m height makes it feel much bigger than the smallest urban runabouts inside. Having to base this thing on a little citycar wasn't ideal for Mitsubishi. Whereas rivals Nissan could point to a relatively small price gap between a top-spec diesel Focus-sized family hatchback and their comparably-sized all-electric LEAF model, Mitsubishi acknowledged that there's a yawning price differential between the cost of an urban runabout like their little Colt hatchback and this i-MiEV. But they did point out that within the confines of its compact dimensions, this car offered a surprising amount of space inside. The very first i-MiEV models felt cheap and plasticky inside in a way that European buyers would have objected to. Peugeot changed much of that when it came to bringing their version, the iON, to market and Mitsubishi were watching closely. They not only built most of the French brand's interior improvements into their version but also improved upon them, with options like the lovely - but sadly extra cost - leather-stitched dashboard finish. As for the cabin itself, well yes, it really does feel surprisingly airy. Certainly it's narrow, but then you'd expect that given that this car is under 1.6m wide. The main thing is that passenger space was completely unaffected by the switch from petrol to battery power. The electric motor sits under the rear seat, with the battery pack under the floor in place of the fuel tank. As a result, there's enough space for two adults to feel quite comfortable on the kind of short to medium journeys this car will be making. We'd say three children could sit here but annoyingly, only two belts are provided, which will be really irritating for families. At the wheel, you sit quite high, which isn't a bad thing in an urban setting, surrounded by sensible ergonomics and excellent all-round visibility. Taking a seat here for the first time, the only clue most would have that this was anything but a conventional petrol powered citycar would be the fact that the dash displays a petrol pump with, somewhat oddly, an electric plug hanging out of it. Boot space isn't huge but despite the need to accommodate all those batteries under the floor, the 170-litre figure is 40-litres more than you'd get in a citycar from this period like Peugeot's 107. And you can make good use of it by angling the rear seat backrests forward. Of course though, if you're not using the back seat, you can push forward the 50/50 split-folding rear seats to free up much more space. 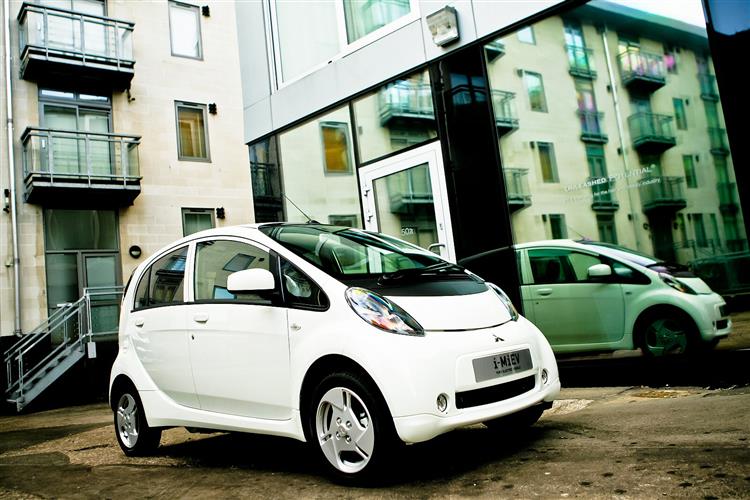