Ford's second generation C-MAX MPV injected a welcome dose of driving enjoyment into the segment for five-seat compact People Carrying models. In this revised post-2015 form, it also brought a range of useful fresh technologies to this segment and benefitted from smarter looks and a revised range of more efficient engines. As with the original version of this second generation model, you also get clever seat-folding mechanisms and plenty of space as part of an accomplished range of virtues. The result could well be a more versatile alternative to that familiar family hatch you might have been considering.

Compromise doesn't have to be a dirty word. In fact, intelligent compromise is exactly what underpins the design of Ford's C-MAX mid-sized MPV, here reviewed in updated post-2015-era guise, its revised second generation form. The compact mid-sized 5-seat MPV genre marks out a class of car that needs to be large enough to fit all your kids and luggage - but not so big that it's hard to park or pilot around town. It requires an engine with the torque for willing acceleration when the vehicle's fully loaded but not so much pulling power that running costs will stretch the family purse strings to breaking point. It would need all the modern safety and convenience features that buyers demand, but at the same time, must feature pricing that isn't out of reach of wage packets that already have school uniforms to buy and hungry mouths to feed. As we said, it's all about intelligent compromise. That's always been the appeal of a family 5-seat MPV of this kind, a class of car that, for not a lot more money than you'd pay for a Focus or Astra-sized family hatchback, offers a little more space and a lot more versatility. The only downside with most small People Carriers of this kind tends to come in terms of driving dynamics that inevitably seem to get watered down with the extra weight and height you get from models in this segment. Or some of them anyway. Right from its original introduction back in 2003, Ford's C-MAX proved it didn't have to be like that. You really could have a compact but spacious MPV that was just as good to drive as an ordinary family hatch. Even by 2015 when the revised version of this MK2 model was launched, most other brands hadn't grasped that concept. The launch of the second generation C-MAX range in 2010 saw this unique selling point carried over intact, the line-up by then offering both five and seven-seat derivatives. These quickly gained Ford a useful 12% market share in this sector, as total European sales across this model line exceeded the 1.2 million mark. By 2015 though, the market was expecting more of models in this segment, with buyers seeking greater efficiency, cutting-edge technology and more performance. This revised C-MAX range sold until late 2019 and then wasn't replaced as buying preferences turned towards SUVs.

Unofficially known within Ford as 'Compact', this five-seater C-MAX looks a little better proportioned than its seven-seater Grand C-MAX stablemate - as you'd expect, given that its well proportioned if slightly unadventurous shape doesn't have to incorporate the larger model's twin sliding side doors. The looks have aged well, requiring just a little freshening up with the 2015 year facelift to keep this model looking current. This updated version's restyling package was supposed to reflect the brand's so-called 'One Ford' global design language. Hence the addition of the distinctive trapezoidal front grille familiar from most of the company's other models, which joined the sleeker, 'chiselled' front headlamps. The cabin updates for this facelifted MK2 model included classer black satin trim and chrome detailing that contributed to a modern look. Some of the functions were simpler to use - the air conditioning controls for example, which gained buttons that were easier to recognise and distinguish. Others were relocated to the SYNC2 infotainment screen that on most models was added to dominate the centre of the dash. In the rear seat, you get three entirely separate rear chairs. On the downside, you can't slide them backwards and forward in the way you can in a Grand C-MAX. And, because the cabin's quite narrow, the middle seat is too, so there's no chance of fitting three child seats side by side. On the plus side, the set-up does benefit from an optional 'Comfort' feature which most original buyers specified and which allows the centre seat to be folded away while the outer ones slide diagonally backwards to create a more luxurious two-seater rear passenger layout. And luggage room? Even with a full complement of passengers on board, owners will be enjoying anything between 432 and 627-litres of space, depending on whether they load up to parcel shelf level or fully onwards to the roof. If you need more space, then pushing the seats forward reveals up to 1,684-litres of fresh air. 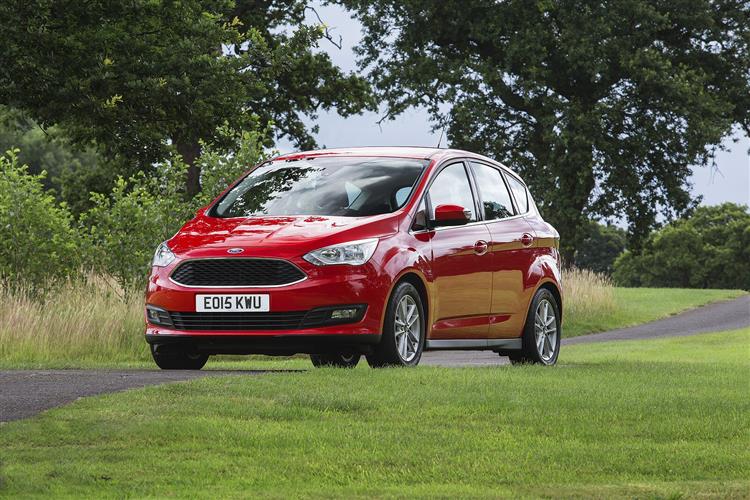