EDGING TO THE EXIT (some text hidden)

Having sold strongly in the US, Ford hoped that its largest SUV, the Edge, could provide a profitable top tier to its Crossover line-up in Europe. It didn't turn out that way, despite the company's best efforts, which included the wide range of updates made to the car in its final period on sale between late 2018 and early 2020. Might you still want a used one if the price is right? We're going to find out.

Before the Edge, the last large luxury SUV Ford had attempted to sell here was the Explorer. Launched in 1997, this US market 4x4 was everything European buyers didn't want, weighty, ponderous and petrol-powered. As a result, buyers almost universally ignored the thing and it took nearly two decades before Ford felt brave enough to return to the full-sized SUV sector with this Edge model, launched here in the Summer of 2016. By this time, the company absolutely needed a larger SUV in its line-up to satisfy buyers in this segment wanting something a little larger than the Blue Oval brand's existing small EcoSport and medium-sized Kuga models. The Edge didn't sell that well though, so Ford moved to update it with a range of improvements that included a new EcoBlue-spec version of the brand's 2.0-litre diesel engine. And a power hike for that unit in its fastest form to 238PS, with that top powerplant mated to a more sophisticated version of Ford's Intelligent All-Wheel Drive system. The changes made in late 2018 also included the addition of a new 8-speed auto gearbox, plus this car included a stack of useful camera-driven safety kit thanks to the brand's 'Co-Pilot360' driver assistance technology package. Add in extra media connectivity courtesy of the Blue Oval's clever 'FordPass Connect' embedded modem and the 'SYNC 3' communications and entertainment system and you can see why this Edge gained a fair degree of showroom appeal. But it wasn't enough and the car was deleted from the Blue Oval brand's price lists in early 2020.

Exterior design, according to Ford, is the biggest determining factor towards purchase of an SUV. Which perhaps explains why the original version of this car struggled so much in our market after its launch in 2016. One senior Blue Oval designer described its looks as 'heavy handed'; they were certainly more appropriate to the other side of the Atlantic. Hence the aesthetic updates made to this car in 2018 that changed much, but ultimately delivered little. The bonnet, the tailgate, the bumpers and the front grille were all restyled, but the bulky end result looked little different, with its sculpted bodywork and sharply raked C-pillars. Inside, not much changed as part of the facelift package of updates. The only really key differences lie with the addition of a circular little controller for the transmission and, on plusher models, the incorporation of a thumping 12-speaker 1,000-watt B&O sound system and the clever 'FordPass Connect' embedded modem set-up, which gives you onboard Wi-Fi and Live Traffic information. If you've chosen a 'Vignale'-spec car, the 'Tuxedo'-style quilted seat trim will certainly be a talking point, particularly if it's impractically cream-coloured. Darker-coloured leather works better. In the instrument cluster, there's a 10-inch TFT screen made up of various inset multi-function displays. Anything else you need to know will be covered off by an 8-inch central 'SYBC 3' infotainment screen, which delivers the usual audio, navigation and smartphone-mirroring options, plus can deal with climate settings too. In the back, as at the front, the doors open wide to make access easy and once you're inside, you'll find massively more space than is provided by mid-sized SUV models at this price point (think RAV4 or CR-V). No other SUV priced remotely close to this one can comfortably seat three adults across the back seat, but such a feat is easily managed by this Ford, aided by a notably low-set central transmission tunnel. To some extent, the reason why it's so spacious in the back is that surprisingly, Ford opted not to add in a third fold-out seating row in the boot. Where the five seat-only approach should pay off is when it comes to boot space. Avoid entry-level trim and you get a power-operated tailgate that can be activated merely by waving your foot beneath the bumper if you happen to be approaching the car laden down with bags. Once it's raised, there is indeed a quite enormous boot. Even if you only fill the space up to the window line, there's room for 602-litres of cargo. Pack it to the roof and you can fit in 800-litres of luggage. 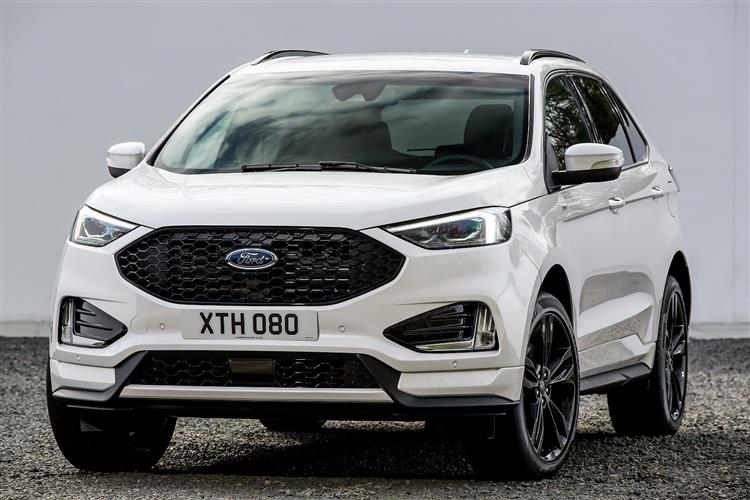