THE RX-EFFECT (some text hidden)

In fourth generation guise, the Lexus RX got smarter, cleverer and slightly bigger. It's the large luxury SUV that pioneered hybrid power and in this form, continues to use that technology in 'self-charging' form as part of a more relaxed ownership experience. For target buyers, there's nothing quite like it.

Back at the turn of the century, Lexus became one of the first premium brands to enter the luxury SUV segment, offering an RX model that quickly became even more unique in MK2 model guise when in 2005, it pioneered hybrid power in this sector. Buyers approved and over three generations, more than 2.2 million RXs found satisfied owners. Most of these sales though, were in the US market the car was primarily designed for. By the middle of the 21st century's second decade though, it needed to have wider appeal in Europe and this fourth generation version was tasked with delivering just that. If ever a category of car cried out for a more efficient means of forward motion, it's the large luxury SUV. Traditionally for most buyers, such a vehicle has only been viable to own when equipped with a diesel engine - but even that attracts quite a bottom line running cost penalty. Hence the appeal of hybrid power, something you'd have thought would by 2015 have been quite commonplace in this segment. Not so. By then. belatedly, Volvo and the German premium brands had just started to offer this technology in their luxury SUVs, but only in pricey Plug-in form. The RX's hybrid engine, in contrast, is one of the non-plug-in 'self-charging' sort. If you can't stretch to a PHEV hybrid rival from this period and want a car in this class, then broadly, you've the choice of a noisy, potentially planet-polluting diesel. Or this RX. So you can see then, why this Lexus sells quite well globally, a package that would have been even more successful - in Europe at least - had earlier versions been a touch more spacious and a little more dynamic to drive. The Japanese brand told us that this fourth generation model was both of these things, at the same time also offering extra technology, stronger standards of safety, even more luxury and much sharper styling. Its hybrid powertrain was revised over the previous model too, though not in the kind of fundamental way that could have incorporated Plug-in technology or more frugal diesel/electric power. Lexus doesn't like diesels, but initially, it wasn't averse to offering RX customers the option of a more conventional engine in this MK4 design, hence the early availability of a minority-interest petrol turbo RX 200t derivative to sell alongside the more significant RX 450h hybrid model. The RX 200t variant though, was quickly deleted. A longer wheelbase 7-seat RX L body shape was introduced in 2018. And the range was facelifted in late-2019. It's the pre-facelift MK4 models though, that we're going to look at here.

At a stroke, this fourth generation RX made its predecessors look very ordinary indeed, it's sharp, sculpted shape echoing the Japanese maker's 'L-finesse' styling approach first used on the company's other luxury SUV, the slightly smaller and strikingly handsome NX model. It's an absolute riot of contrasting angles, swage lines and details all competing for your attention, a combination that has absolutely no right to work - but somehow it just does. All of that disguises the fact that this is a slightly larger car than its predecessor: Lexus still had to extend the wheelbase though, to create the alternative 7-seat RX L version of this model. Behind the wheel, the distinctively styled interior delivers a driver-centric feel that's refreshingly different from the expensively-crafted SUV simplicity served up by rival German brands. This cabin's exquisitely-trimmed too, but somehow in a more characterful way, with a lovely central analogue clock and leather that's hand-stitched on each RX by a team of 17 'Lexus Takumi' craftspeople to achieve its flawless finish. Even the flat-screen infotainment display is built into the dash without the 'iPad-stuffed-into-the-fascia' feel that similar installations give you in some rivals - which is impressive given that the 12.3-inch TFT monitor used on top models featuring the 'Lexus Premium Navigation' system is so big. In the rear, you discover that the exterior size increase cured one of this model line's long-standing shortcomings: a lack of rear cabin space. That's not only because the 60mm wheelbase increase freed up more legroom but also due to the fact that Lexus lowered the rear floor section. The luggage area is 453-litres in size and was designed around the needs of the hybrid variant. If you need more space, you'll be pleased to find that the centre part of the rear backrest splits separately so that you can more easily transport longer items like skis. Flatten the bench and though the cargo area created isn't completely flat, it is 924-litre in size. 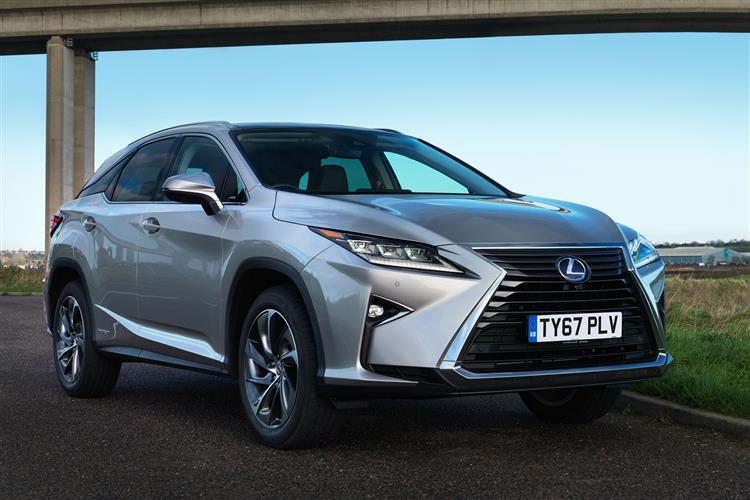