THE GENESIS OF ADAM (some text hidden)

Launched in 2013, the ADAM proved to be a refreshing take by the Vauxhall / Opel brands on the small car sector. It never sought to replace the conventional citycar and supermini offerings sold by those marques, but it did offer a more stylish small car option than anything those companies had produced before. Here was a car that sat just between the citycar and supermini segments, aimed at buyers bored by the sight of BMW's reinvented MINI on every drive and unmoved by Fiat's funky 500. The ADAM was a fashionable alternative for such folk and from new, came with an encyclopaedic list of options, bidding for individuality beyond the hatchback herd.

Once upon a time, a small car was a purely functional thing. It certainly wasn't something you bought to make any kind of fashion statement. Traditionally, those seeking to do that on an affordable budget usually went for a little sports car - or perhaps even a compact SUV. From the turn of the century though, the success of BMW's modern-era MINI showed that things could be different; a small car could be trendy and fashionable. Buyers seeking such a thing want a more unique product of course, hence a developing trend this century amongst mainstream makers in developing separate small car model lines with which to serve them. So it was that in 2007, Fiat launched the trendy 500 model to sell alongside the workaday Panda. And, for the same reason, in 2009, Citroen introduced the avant garde DS3 to sell alongside the ordinary C3. Hence the Opel / Vauxhall conglomerate's thinking in 2013 in launching this ADAM model as alternative to their bread-and-butter Corsa supermini. The model title's a nod to Adam Opel, the founder of Vauxhall's European sister company. This didn't start a trend for Biblical car names. It did though, ignite a fashion for buyer personalisation. The designers planned over a million possible specification and trim combinations for this car to ensure that the chances of two identical ADAMs ever being produced would be statistically very slim. So the ADAM was ground-breaking where it mattered - in the showroom. To disguise perhaps, the fact that it was actually quite conventional in arguably less important areas, running on the underpinnings of Vauxhall's old 2006-era 'Corsa D' model. The ADAM was developed to some extent throughout its model life. The 1.4-litre four cylinder petrol engines it campaigned with for most of its production life were joined by a more modern three cylinder 1.0-litre turbo petrol unit from 2014 onwards, but that unit was discontinued in this car before the end of the ADAM's production cycle. Also in 2014, a 150PS version of the 1.4-litre powerplant was introduced to power the ADAM S hot hatch variant. This engine also featured in a 'ROCKS' variant, which had mildly SUV-like bodywork additions. There was also a 'ROCKS AIR' version which had a retracting canvas sunroof-style top. After the French PSA Group's takeover of the Vauxhall / Opel brands in 2017, the ADAM's days were inevitably numbered and production ceased in 2019.

What You Getword count: 860

The ADAM isn't as instantly eye-catching as a rival MINI or a Fiat 500, but then these brands have always had the advantage of aesthetically harking back to Fifties retro models, the themes for which evoke more instant recognition. Not having a diminutive automotive Golden Oldie to reprise, the Opel / Vauxhall designers were left in the same position as Citroen were in when they created their DS3 and Alfa Romeo was in when it created its little MiTo: namely the need to create a fresh, new modern small motoring lifestyle theme. Most of these kinds of cars look a little dull until you start to dress them with appropriate options - and it's the same story here - but once you have, then it's hard not to like this cute and cuddly shape, even if it is based on rather old underpinnings (those of the old 'D'-generation version of the Corsa supermini, a design dating all the way back to 2006). Of course, cynics say that fashion-led small runabouts are merely smart-suited citycars wearing supermini price tags. There's some truth in that, truth indeed which appears at first glance to apply in this case. At under 3.7m in length, this ADAM is actually shorter than many city cars and a full 300mm shorter than a typical version of a Vauxhall Corsa supermini from this era. But there's more to it than that. The tall height and the considerable width - it's actually wider than a Corsa - positions it visually as a bigger car than it actually is. A clever trick that also pays dividends inside. As in a Fiat 500, the high roof gives a spacious feel, something that here is further underlined by the greater width and glass area. But all the smoke and mirrors in the world can't create space where there isn't much and Vauxhall's claim that this design could 'comfortably seat four adults' required for fulfilment the directive that those in the front should be very short-legged indeed. To be fair, it's virtually impossible for something this short to properly seat two fully-sized people in the back, something most ADAM owners rarely wanted to do anyway. But for those occasions when friends do need transport, they'll feel less claustrophobic here than in just about any small lifestyle runabout from this era we can think of. It's certainly much nicer in the back of an ADAM than it would be in a MINI, a rear seat position which even kids often object to. And at the wheel? Well, original ADAM buyers will often have used the enormous trim choice range to complete a decor finish that's either restrained, wilfully extrovert or more likely, a feel that's somewhere between the two. This aside, curiously enough, it does feel quite MINI-like, a feeling engendered mainly by provision of the same kind of over-sized chunky steering wheel which actually rather adds to the intended feeling of impending fun. There's (thankfully) no huge retro MINI-like central dial in front of you but the red-needled instrument layout with its round watch-style dials is smarter and much easier to get to grips with than that, though it's a pity that the speedo lacks specific 30 and 70mph markings. The clean overall design is complemented by a centre console proving that GM designers really can do this kind of thing in a smart, concise and easy-to-use form. Instead of the rows of complicated little dials and knobs you get on a Corsa, an Astra or an Insignia from this era, there's a simple, clear and easy-to-grasp layout that most original buyers embellished with the optional 7-inch LCD colour Intellilink infotainment system, one of the first of its kind to be able to communicate with both Apple and Android devices (plus apps) and one operable either via the touchscreen itself or through steering wheel switchgear. As you'd expect, Intellilink deals with stereo and smart 'phone duties, plus the screens for the extra-cost navigation system, but it can go a lot further than that. Thanks to USB and Bluetooth connectivity, the 'Gallery' section can play your stored videos and show your personal pictures, while the 'Phone Apps' section can link you in with approved apps like 'Stitcher', the global podcast internet radio system and the 'BringGo' navigation app. Out back, a prod on the rear Griffin badge reveals a 170-litre boot that lies size-wise somewhere between slightly smaller shape of a MINI and the slightly larger one of a Fiat 500. As in those cases, there's not a huge amount more to play with if you push forward the rear bench: in fact, the 484-litres this ADAM then offers is one of the smallest spaces in the class and less than half what you'd get with the same configuration revealed in a Vauxhall Corsa from this era. Still, you don't buy a car of this kind if you want huge carrying capacity. Of more importance are clever touches - things like the optional Flex-Fix bike carrier that Vauxhall offered to allow buyers to carry up to a couple of bicycles. Not something you'd expect to be able to do with a car this small. 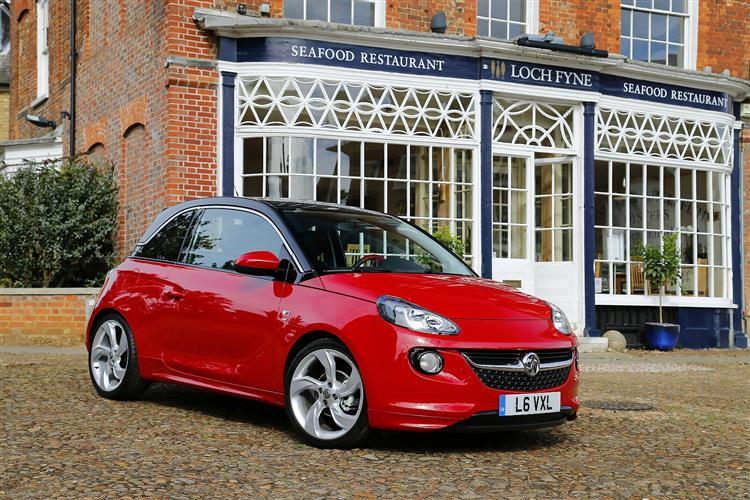