This third generation Focus RS went way beyond anything a normal hot hatch was capable of back in 2015, offering what bordered on supercar levels of performance. To create it, a team of Ford's finest engineers got together with experts like World Rallycross star Ken Block. What was produced as a result was the most frantic family hatch of its period, with all-wheel-drive taming simply exhilarating performance. As a used buy, it's quite a prospect.

As performance brands go, Ford's RS badge belongs very much in the premier league. With a heritage stretching back to 1970, the Blue Oval maker's most coveted letters are held in reserve and applied only to the company's most focused high-performance machinery. RS versions of the Escort, Capri and Sierra all hold a special place in the hearts of enthusiasts and in more recent times, it's been the Focus RS that's carried the torch with no little distinction. This third generation version was the 30th RS-badged model to take its place on Ford's roll of honour. So, a little history before we start. Focus RS models started with the MK1 model of 2002, a car that, looking back, seems rather feebly-powered with 215PS on offer from its 2.0-litre turbo motor. The second generation version of 2009 was a more serious bit of kit, with 305PS on tap and clever RevoKnuckle front suspension that just about managed to tame all of the 2.5-litre turbo's unit's prodigious torque through the bends. Adding the further firepower that Ford knew would need to be part of this MK3 model was always going to necessitate four wheel drive and, sure enough, that's what we got when this third generation car was first announced in the Summer of 2015, the first all-wheel driven Ford RS model since the Escort RS Cosworth of 1992. That Escort was primarily designed to win in the World Rally Championship. This Focus though, was put together very much with ultimate road performance in mind. It used much the same 2.3-litre EcoBoost four cylinder turbo engine featuring in the brand's Mustang muscle car but added in a twin-scroll turbocharger and a unique Cosworth cylinder head, these tweaks boosting power to 350PS. To send drive to the rear wheels required a complete rethink of the body, which had extra strengthening to cope. As for the back axle, it did away with a traditional differential and used clever gears to direct power between the wheels. This is what let this RS perform its party piece in 'Drift Mode', where you can slide the car like a rally driver. It was all enough to create a package more than strong enough to trouble ultimate super-hatches of the 2015-2018 era like Audi's RS3 and the Mercedes-AMG A45. Yet it sold when new at the kind of much more affordable price you'd have paid for merely very quick hot hatches like Volkswagen's Golf R and Honda's Civic Type-R. Two run-out special editions were launched in 2017, the 'Red Edition' and the 'Heritage Edition'. So does the Focus RS add up as a used buy? And even if it does, is this Focus RS too radical, a specialist machine only for collectors and enthusiasts. Time to find out.

What You Getword count: 355

RS Fords have never been shrinking violets from a styling perspective. Fierce bodykits and super-sized rear wings big enough to hold a board meeting around have long been the order of the day, a theme this third generation 5-door-only Focus RS continued in its own muscle-bound style. You get that with rivals too of course, but with most of those cars, you're looking at exterior embellishments made to a standard bodyshell. In this case though, things were fundamentally different under the skin, courtesy of the strengthened chassis necessary to cope with 4WD and the extra performance on offer. Virtually all the other mechanicals used in this car are bespoke too - the engine and the drivetrain obviously, but also the suspension and the steering too. No half-measures then. Inside, you get grippy branded Recaro seats upgraded to race-style 'shell' status in a move that gives the cabin more of a rally-style feel. We're not quite so keen on the look of the leather-stitched flat-bottomed multi-function steering wheel: it's OK in a Focus ST, but something a little less mainstream was, we think, required for this RS. Another feature shared with the ST is the bank of three extra gauges on top of the dash. These deal with turbo boost pressure, oil temperature and oil pressure and are there to serve as a nice visual throwback to legendary fast Fords of the past like the Escort Mexico. In the rear, fears that the curved rear roofline might severely compromise headroom turn out to be groundless. A couple of six-footers can be decently accommodated, though the wedgy side profile does hem you in with a slightly higher windowline. And the boot? Well rear cargo space was always an achilles heel of the standard Ford Focus from this era and having to package in this RS model's 4WD system made things even worse here, reducing the 316-litre total you'd get in, say, a Focus ST from this period to just 260-litres here - less than you'd get in a Fiesta. Still, look on the bright side: that's only 20-litres less than you'd get in a rival Audi RS3. 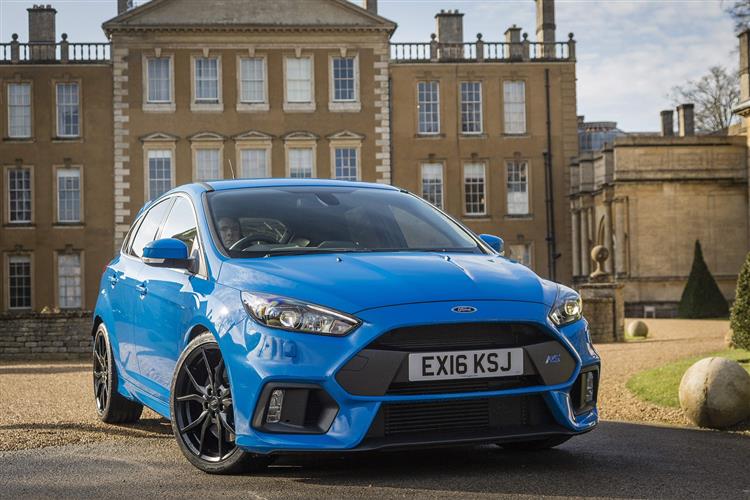