Legend has it that shortly before the 1923 Targa Florio motor race in Sicily, Alfa Romeo driver Udo Sivocci found a four leaf clover by the roadside. Hoping for good luck, he persuaded his team to paint a Cloverleaf symbol on his Alfa Romeo RL. Sure enough, he won the race, scoring Alfa Romeo's first major international victory and from that day on, the Cloverleaf symbol has appeared on Alfa Romeo racing cars around the world. Away from the racetrack, the Cloverleaf badge has also graced a number of memorable Alfa Romeo production cars including the 8C Competizione supercar. This car, the hot hatch MiTo, first launched badged as a 'Cloverleaf' in 2009, is certainly in good company. In the early noughties, industry pundits often pointed out that for a performance brand, Alfa Romeo had been singularly lacking in the matter of providing the market with a credible high performance hot hatch. But perhaps the Milanese maker was simply waiting until the time was right and all the ingredients were in place. In 2009, they were and the MiTo range gained this top shopping rocket variant with a hi-tech 170bhp 1.4-litre MultiAir turbo engine with racetrack pulling power, yet running costs suited to the eco-age. It also got revolutionary active suspension instantly adaptable to both driver and road surface. The car was re-badged 'Quadrifoglio Verde' in 2013. And re-badged again to 'Veloce' in 2016, in which form it sold until discontinued in early 2019.

From its launch in 2009, the styling of this hot hatch MiTo was generally beefed up to reflect the car's sporting prowess with more aggressive bumpers, 17" alloy wheels, bespoke wing mirrors and Cloverleaf badges on the front wings. All of which works well with unique styling that could belong to no other marque, from the serpent-eating-baby badge on the shield-shaped front grille to the rounded jewel-like LED tail lights Inside, there's very little to suggest this model's exalted status in the MiTo range, the only real distinguishing features being the steering wheel and the darkened headlining. Just as well then that the standard MiTo cabin is such a quality thing, though the wheel could be better placed with a little extra rake adjustment. And if you're a petrolhead, just reading 'Giri' and 'Acqua' on the dials will put you in the mood to play. The main dials are hooded in true Alfa-style and the carbonfibre-look dashboard covering is part of a variety of racy trim materials employed to impressively up-market effect. Unfortunately, this is a three-door-only shape, but at least there's decent space in the back for a couple of adults on shorter journeys, even if it is a little awkward for them to get in to start with. There's a lot more room back here than the pathetic berths offered by a rival MINI Cooper S though and the 270-litre luggage bay is nearly twice that car's size, even if the Alfa's opening is a little narrow with a high-ish loading lip. As usual, you can extend the space on offer by pushing forward the rear seat - though the usual split-folding arrangement you'd expect was, rather meanly, offered to original buyers at extra cost. 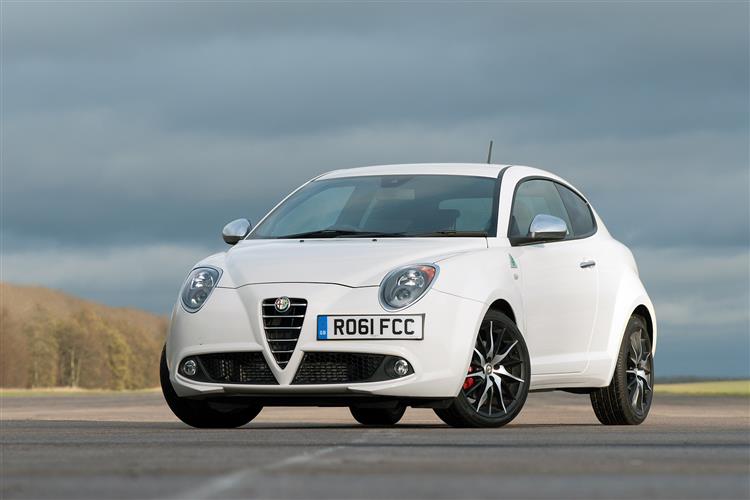