The MiTo aimed to take everything Alfa Romeo knew about sports car dynamics and distil it into one head-turning premium supermini. Aimed at the MINI but offering greater practicality, value and high street wow factor, this Italian alternative was first launched in 2009, but we'd recommend that in buying a used one, you try and stretch to one of the much improved post-2014-era facelifted versions - which is what we're going to look at here. These cars were much enhanced by smarter looks inside and out that built on an impressively frugal range of engines and a uniquely special feel. Can small cars from the 2014-2018 era that are small and efficient really also be desirable? Alfa reckons so.

It took a long time for us to see a product that properly competed with BMW's MINI. That car proved that European drivers were prepared to pay quite a premium for something three-door and compact, provided it was stylish, sporty and had the right brand cachet. Step forward Alfa Romeo's MiTo, first announced in 2009 but thoroughly revised in late 2013 to create the car we're going to look at here. Thirty years ago, enthusiasts on real world budgets dreamed of a compact Italian hatchback packing all of Alfa's heritage and spirit into a four-metre length - and realised it with the iconic Alfasud. This MiTo always aimed to satisfy their kids in exactly the same way. If you're wondering about the name, well it combines the first two letters of Milan (where Alfa Romeo was conceived) and Turin - or in Italian 'Torino' - (where the MiTo was made). More importantly though, this was the car that returned its brand to the supermini segment, a true successor not only to the Alfasud but also to the iconic Junior models of the Sixties. But while those cars were Alfa-engineered through and through, this one was developed in more constrained times that required it to share the underpinnings and engineware of Fiat's Punto. Fortunately for potential buyers, the two cars had a very different feel thanks to the development of MiTo-specific steering, seating, suspension and brakes. The Milanese maker claimed that the engines were tuned differently too and of course, there were this car's unique looks. So far so good. Early MiTo sales were certainly encouraging, especially after hi-tech Multijet II diesel and 1.4-litre MultiAir petrol units were installed beneath the bonnet from 2010 onwards. By 2013 though, things were tailing off as buyers at the premium end of the small car sector began to be tempted away by direct rivals like Audi's A1 and the prospect of the third generation modern era MINI. Alfa urgently needed to rejuvenate this car. They did with this facelifted MiTo that sold until the car was discontinued in early 2019.

What You Getword count: 563

Most cars have some kind of styling brand identity but with an Alfa, the whole design has a unique look that could belong to no other marque - and it's one you'll either love or hate. The front end ought to look a little awkward, the shield-shaped front grille with its serpent-eating-baby badge pushing the number plate awkwardly to its left. For us though, somehow it all just works, with rounded jewel-like front and rear lights perfectly setting off sleek, aerodynamic bodywork derived from 450bhp Alfa's 8C Competizione supercar. This facelifted post-2014-era MiTo remained a three-door-only shape and at first glance, little seemed to have changed in comparison to the car we were first presented with back in 2009. True Alfisti who care to peer a little closer though will notice the improvements visited upon this improved model: the small but subtle changes made to the chromed front grille, the titanium grey headlamp and tail lamp surrounds, the tinted rear windows and the sports rear bumper. The same mantra of careful improvement was also applied to the cabin with its revised dashboard, smarter steering wheel, more supportive seats and upgraded plastics. Make sure you avoid the odd (and fortunately optional) black-to-red fading dashboard finish though in favour of the more muted grey-to-black finish most original buyers wanted. Get beyond that and the first thing you'll notice upon entry is the 5-inch Uconnect touch screen infotainment system with its voice recognition, Bluetooth and optional sat nav features. This set-up also supports text-to-speech and audio streaming technologies and brought this small Alfa properly into the modern era. Otherwise, things were much as before. If you're going to pay premium money for something sized somewhere between a supermini and a family hatchback, then you want it to feel pretty special inside as well as out - and the MiTo doesn't disappoint. The main dials are hooded in true Alfa-style and the optional carbonfibre-look dashboard covering is part of a variety of racy trim materials employed to impressively up-market effect. It's a comfortable driving environment too - unlike Alfa's of old - though there is the small caveat of a reduction in headroom when the optional sunroof is specified. On the back seat, space for heads and legs is restricted, but a couple of adults on shorter journeys can be reasonably comfortable and two children will be fine. At a pinch, you could even fit three youngsters in were it not for the fact that there are only two seatbelts in the back. On the plus side, there's certainly a lot more room than you'll find in a rival third generation modern era MINI Hatch, even if it is a little awkward for folk to get in to start with. Talking of MINIs, let's compare the two cars in terms of luggage space. Lift the rear hatch - the badge neatly doubles as a boot release - and you'll find that this Alfa's cargo bay is around 25% larger than the space its Oxford-built competitor from this era can offer, though the opening you must use to access that room is rather narrow with a very high loading lip to lump stuff over. As usual, you can extend the capacity on offer by pushing forward the rear seat - though the usual split-folding arrangement you'd expect was, rather meanly, only available at extra cost for original purchasers. 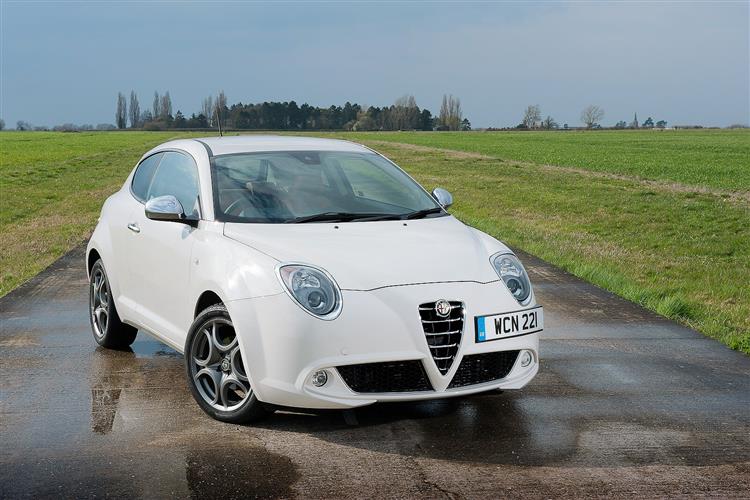