MORE FROM THE BRITISH OPEN (some text hidden)

Looking for the ultimate convertible used car? The second generation Bentley Continental GTC can't be too far from it, a seductive combination of power, style and craftsmanship. Bentley has been making iconic open tourers for over ninety years, some built to achieve success at Le Mans and Brooklands, others to convey their glamorous owners to the resorts of Monte Carlo and Cannes. All have been memorable but in truth, none has been truly sporting in the supercar sense. This second generation GTC aimed to be different. With a choice of 4.0-litre V8 or 6.0-litre twin-turbo W12 engines, this MK2 model possesses a blend of trans-continental pace, dynamic drive and luxurious comfort that very few other vehicles can match.

Has the market ever been offered a proper four-seat luxury convertible supercar? Before this MK2 Bentley Continental GTC model arrived in 2011, we'd argue not. Not much has changed since. Yes, there are supercar drop-tops with cramped rear seats good for little but designer shopping bags. And, at the other extreme, huge leather-lined four-seater cabrios with lumbering luxury powerplants. But nothing that really combines that Ferrari feeling with space enough to share it en famille. In its original MK1 form launched in 2006, the Bentley Continental GTC arguably got the closest to achieving this, but at heart, it was still more a Grand Tourer than a great sportscar - in first generation form at least. Here though, we're going to look at the MK2 model, an open-topped Bentley that was designed to be more dynamically-orientated, yet managed to combine that with the space and rare refinement of an open-topped Rolls Royce. In prospect then, a very special car indeed. These are bold claims that you might be tempted to question if you've either owned or admired a Bentley Convertible in the past. After all, this second generation GTC, launched in the Autumn of 2011, doesn't really look very different from what went before. But then, the things this design needed - sharper handling and a lighter, more efficient snarling engine up-front - were never aesthetic. And both were put in place with a car that'll reward the enthusiasts with a powerfully eco-conscious 4.0-litre V8 or can satisfy more laid-back landowners with an uprated version of the continuing 6.0-litre W12 unit. Either way, this for many will be the ultimate expression of convertible motoring. This MK2 GTC sold until the replacement third generation model was launched in the Autumn of 2018.

What You Getword count: 693

Where the very first Continental GTC was elegant and understated, this second generation version aimed to be more modern and contemporary, re-interpreting a family heritage that goes all the way back to Bentley's 1950s R-Type Continental. Hence the more confident look with its wider track, its extra length and its higher waistline. At the front, the classic Bentley matrix radiator grille is more upright than that of the MK1, with a black gloss finish, a chrome frame and a red enamel Bentley 'B' badge if it cools a V8 within. The smarter headlight design, with its traditional four-lamp format, has exquisite jewel-like detailing, including eye-catching, LED daylight-running lamps. At the rear, Bentley signature 'floating' LED tail lights extend around the corners of the wings, emphasising the car's width and purposeful stance. Again here, there are subtle differences on the V8 variant, with a dark lower valance and chromed 'figure eight' exhaust pipes. What hasn't changed is the effort that goes into creating this automotive masterpiece. It took 150 man hours to hand-build this car, that's five times longer than your typical family saloon. The steering wheel alone takes eight man hours to put together. Over 90% of the interior surfaces are covered in soft Nappa leather. Each W12 engine is built by hand and tested by human ear, as the factory engineers have found this to be more accurate than any machine. Suddenly, you begin to see the rationale behind this car's exhorbitant price tag. More justification is found in the beautiful Karmann-made fabric hood which, together with chassis alterations, adds 175kgs to the standard coupe model's already considerable weight. Although it's not the quickest folding mechanism around at 25 seconds from roof up to roof down, you can operate it at speeds of up to 20mph and its cantilevered operation is seamless, with not one mechanical part visible as it goes through its contortions. With seven bows to preserve stiffness, the hood features a triple-lined fabric construction to ensure the best acoustic and thermal insulation properties. The outer layer is thicker than that of any convertible, while the middle insulating layer is also a good deal thicker than the entire roof sections of most drop-tops. The inner layer meanwhile, is made from high quality cloth so impressive that inside, you'd think you were in the fixed-top coupe version of this car. Even an interior light is built into the headlining. Of course, that roof has to go somewhere when not in use and sure enough, boot space is reduced to 260-litres, down from the 358-litres you could expect from the MK2 coupe model. And at the wheel? Well tug open one of the long, heavy doors and you'll find a cabin that's as gloriously appointed as ever. As with the MK1 GTC, you sit quite high in front of a dash styled to echo the wings of the Bentley badge. The chrome-bezelled dials are beautiful and everywhere you look are soft-touch leathers, exquisite wood veneers, cool-touch metals and deep-pile carpets, all individually crafted by skilled artisans at the Bentley factory in Crewe. Traditional touches - the 'organ stop' air vents for example - blend surprising well with more modern features like the much improved hi-tech colour touchscreen infotainment system. An important change inside made to the MK2 model lay with the revised front seat design, which here no longer carried the seatbelt fixings, hence the need for a belt butler that hands the buckle to you over your shoulder once you're seated behind the wheel. The simpler seats are consequently both slimmer and lighter; most original owners specified them not only with warming and cooling functions but also a neck warming vent for chilly winter mornings. Their extra thinness made the rear section of this cabin a more inviting place for adults who in this MK2 design have slightly easier access to a back seat that affords an extra 46mm of legroom than the MK1 GTC. Though it still won't be ideal back here for anyone over six foot in height, this is at least, for those of ordinary build, a properly sporting four-seater convertible. Which is a very rare thing indeed. 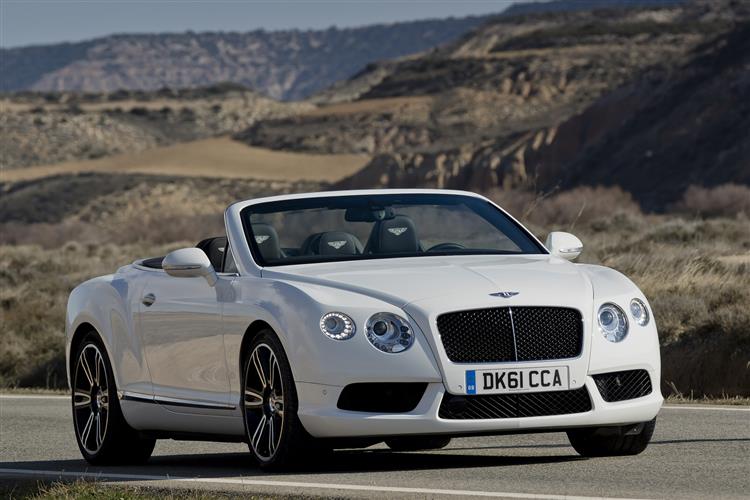