THE EDGE OF REASON? (some text hidden)

Having been Ford's best selling SUV in the USA, the Blue Oval brand hoped back in 2016 that this Edge model could replicate some of that success in Europe. The idea here was to add a top tier to the Blue Oval's Crossover and SUV line-up that would keep customers within the Ford family who might otherwise desert to other brands. It didn't work, but that doesn't mean that an Edge can't make sense as a used buy. You're most likely to come across the pre-facelifted version of this model, sold between 2016 and 2018, so that's what we're looking at here.

Before the Edge, the last large luxury SUV Ford had attempted to sell here was the Explorer. Launched in 1997, this US market 4x4 was everything European buyers didn't want, weighty, ponderous and petrol-powered. As a result, buyers almost universally ignored the thing and it took nearly two decades before Ford felt brave enough to return to the full-sized SUV sector with this Edge model, launched here in the Summer of 2016. By this time, the company absolutely needed a larger SUV in its line-up to satisfy buyers in this segment wanting something a little larger than the Blue Oval brand's existing small EcoSport and medium-sized Kuga models. Forget the truck-like underpinnings you might expect from a large SUV that sells primarily in the US. This car instead shared its CD4 platform - and much of its interior - with the well-regarded Mondeo, as well as Ford's S-MAX and Galaxy MPVs. That People Carrying provenance is one reason why the Edge is so spacious inside, though curiously, for the European market, Ford didn't use that extra room to build in the third seating row that many family SUV buyers in the SUV 'D'-segment wanted. The original version of this Edge sold until late 2016, when it was replaced by a facelifted model featuring Ford's more efficient EcoBlue diesel engines.

What You Getword count: 425

Previous large Ford 4x4s looked very much what they were: SUVs primarily designed for American and Far Eastern markets. This Edge model is a bit different from that, large and imposing but with far more of the kind of European feel needed to take on established rivals this side of the Atlantic. That was further helped by underpinnings very much developed for our side of the pond. Under the skin, the Edge sits on the same 'CD4' platform that Ford uses for the other large models in its passenger car range, the Mondeo and the S-MAX and Galaxy MPVs. Take a seat inside and ahead of you through the leather-trimmed three-spoke multi-function steering wheel, there's a classy, if rather cluttered, instrument cluster that in mid and upper-range models gives you a sophisticated 10-inch TFT set-up made up of various inset multi-function displays. The two outer ones are framed by conventional speedometer and rev counter gauges, with trip computer information on the left and safety functionality depicted on the right. In the middle, you get 'Entertainment', 'Navigation' and 'Phone' options. Anything this set-up can't tell you will probably be covered by the feature that on all models dominates the centre of the dash, the 8-inch SYNC 3 colour touchscreen, there to play its part in reducing button clutter and giving the cabin a cleaner, smarter feel. In the back, as at the front, the doors open wide to make access easy and once you're inside, you'll find massively more space than is provided by mid-sized SUV models at this price point (think RAV4 or CR-V). No other SUV priced remotely close to this one can comfortably seat three adults across the back seat, but such a feat is easily managed by this Ford, aided by a notably low-set central transmission tunnel. To some extent, the reason why it's so spacious in the back is that surprisingly, Ford opted not to add in a third fold-out seating row in the boot. Where the five seat-only approach should pay off is when it comes to boot space, so let's have a look at that. Avoid entry-level trim and you get a power-operated tailgate that can be activated merely by waving your foot beneath the bumper if you happen to be approaching the car laden down with bags. Once it's raised, there is indeed a quite enormous boot. Even if you only fill the space up to the window line, there's room for 602-litres of cargo. Pack it to the roof and you can fit in 800-litres of luggage. 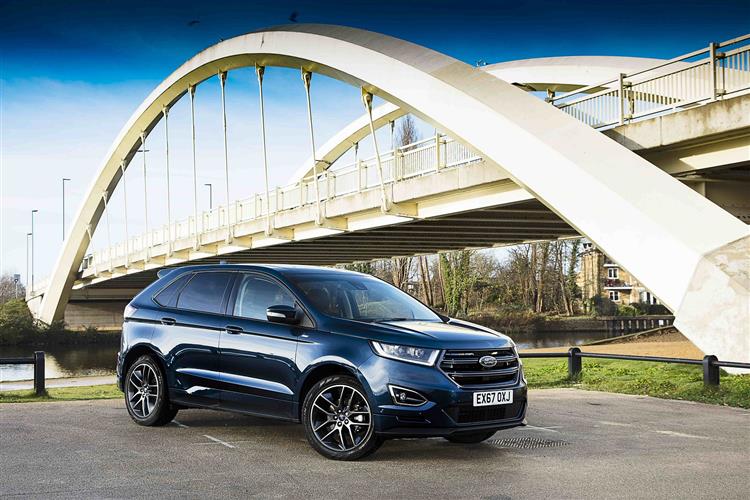