A PRACTICAL PRO (some text hidden)

In this improved second generation post-2015 guise, Kia's pro_cee'd further sharpened its proposition in the affordable coupe segment, with smarter looks, extra technology and the option of clever three cylinder petrol power. A more sharply-orientated top turbo GT flagship variant aimed to snare performance people, but it was the lower-powered pro_cee'd models that made the sales numbers, cars blessed with reasonable running costs, spacious practicality and a very good after sales package. Potentially then, there's a lot to like here.

Back in 2008, the smartly-styled pro_cee'd coupe was one of the key cars that changed the public perception of Kia. That original 'ED' version was replaced by a second generation 'JD'-series model in 2012, a design which was then facelifted in 2015 to create the car we're going to evaluate here as a used buy. What changed with this revised car? Well, humbler petrol models got a freshly developed 1.0-litre three cylinder ecoTurbo engine. The diesel variant gained an efficiently slick-shifting dual-clutch automatic gearbox. And this top GT sporting model got re-tuned suspension and steering for a sportier feel. All of this was garnished with slightly sleeker exterior looks, plus buyers got a minor cabin upgrade that improved the infotainment set-up. This car sold until early 2019, when it was replaced by a third generation ProCeed model that morphed into a five-door 'Fastback' estate.

Back in 2008, opinion was divided as to whether the first generation pro_cee'd model was actually a coupe at all. Many simply saw it as a three-door version of the ordinary cee'd family hatchback. Some will still view this second generation version in the same way, but it's certainly much sleeker and much more of a bodystyle in its own right, with the roof, the body sides and the rear end completely redesigned to suit a coupe clientele. Behind the wheel, changes made to this improved second generation model include chromed highlights around the air vents and the electric window switches. More significant were the enhancements to the bright centre-dash 7-inch colour infotainment touchscreen you get on top variants. Partnership with Tom Tom enables the system to offer things like speed camera location warnings and live updates on traffic and weather. Getting into the rear is made easier by front doors that are 270mm longer than those in the five-door cee'd - though that might be a problem in tight parking spaces.. Once there, thanks to a wheelbase length identical to that of the five-door cee'd, space for a couple of adults is reasonable on all but the longest journeys. Out back, there's the same 380-litre boot you'd get on the five-door model. The 1210-litre total capacity you get when the seats are flattened is only 93-litres less than you'd have in a five-door cee'd. 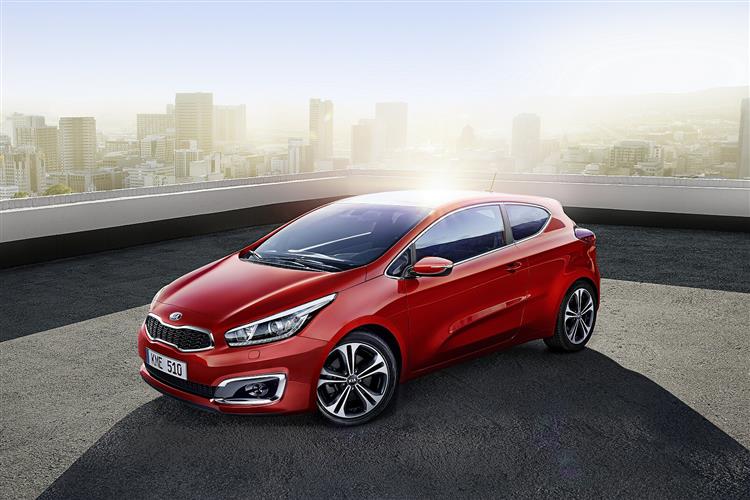