Back in 2012, Skoda re-focused itself on the family hatchback segment with this Rapid, a car that was bigger and better value than most of its Golf and Astra-sized competitors. Rapidity may not be high on this car's agenda but with proven mechanicals and a refreshing lack of gimmickry, it aims to appeal to an assured kind of buyer who doesn't need to hide behind a badge to impress others. In other words, the kind of person who's traditionally bought a Skoda will probably very much like this one. Let's check it out as a used buy.

Back in the 1930s, the Skoda Rapid helped its Czech brand to become one of the largest automotive makers in Eastern Europe. And, with history repeating itself as it often does, this car, another Skoda Rapid, aimed to do exactly the same thing at its launch in 2012. Developed alongside SEAT's virtually identical Toledo, this design was true to Skoda's core values, costing buyers a little less yet offering them a little more, with starting prices pitched a shade below the family hatchback norm and cabin space, particularly in the boot, a little above it. Those values will appeal to this car's target used buying audience, more mature private buyers seeking reliable five-door transport delivering everything they need and nothing they don't. So the fact that sophistication beneath the skin, out on the road and inside the cabin was largely reserved for Skoda's more up-market Octavia will probably matter little. In 2013, the Czech brand introduced the more conventional-looking Rapid Spaceback model to sell alongside this Rapid. In 2019, both cars were replaced by the brand's Scala model.

What You Getword count: 599

We'll need to tell you that this car was styled by the same man, Jozef Kaban, who penned the million pound Bugatti Veyron supercar, for it's not something you'd guess on first acquaintance with this smart, clean but rather conventional shape. Actually, it's not very conventional at all by class standards, at around 4.5m long and under 2m wide significantly longer but slightly narrower than the Focus-sized family hatchback class norm. Aesthetically, probably the most notable feature is the distinctive front grille, formed from 19 vertical slats that aim to widen the look of the car and finished with a chrome frame that dips around a prominate Skoda badge that sits centrally on a raised crease rising from the bonnet to the base of the windscreen. Moving to the side reveals the crisp so-called 'Tornado line' that's also used on far pricier Audis, there to accentuate the length of the body and link both front and rear light clusters to form one harmonious shape. The rear lights feature the brand's usual 'C-shaped' design and are finished with the same crystalline detailing applied to the lamps at the front. Between them, you lift a wide-opening tailgate that rises to reveal a simply enormous boot. Though the damper mounts and wheel arches intrude a little from the sides, there's still 550-litres with all the seats in place, so this is nearly 60% larger than the trunk you'll find on a rival Ford Focus from this period. And it's a versatile space too. Not only do you get bag hooks and storage boxes behind the wheel arches but there's a clever double-faced floor carpet option that almost all owners will want. You turn it rubber-side-up for muddy boots and flip it back to carpet for suitcases or shopping bags. For the carriage of larger items, you can of course push forward the split-folding rear seat. That unfortunately doesn't create a completely flat loading deck, but it does free up 1,490-litres. In other words, you're looking here at the kind of carriage capacity you'd get from a typical estate body style in this segment. That's why, in contrast to rivals, the Rapid range didn't need to offer one. Skoda has brought us a car in this class with a huge boot before - the first generation Octavia - but in that case, the huge trunk space was paid for with restricted legroom for rear seat passengers. Fortunately, that mistake wasn't made again here. The rear doors open wide for easy entry and exit and there's comfortable knee and headroom for two, if not really three adult occupants. Good legroom too. One adult six-footer can easily sit behind a driver of the same height, which can't be said of too many cars in this segment. At the wheel, those familiar with the brand will feel quite at home. As usual with Skodas, the design is clean, functional but not particularly exciting, with many of the surfaces quite hard to the touch and things like the unlined storage bins suggestive of budget brand pricing. Still, everything is nicely laid out and seemingly built to last and there are plenty of useful nooks and crannies, including a slot for your parking tickets and useful storage nets on the side of the front seats' backrest where you can get at them easily. A 'V'-shaped centre console rises up from the footwell to the main dashboard and houses both ventilation and stereo controls. Through the four-spoke wheel you glimpse a large, clear twin-binnacle instrument display. Nothing then to especially catch the eye, but everything perfectly in its place. 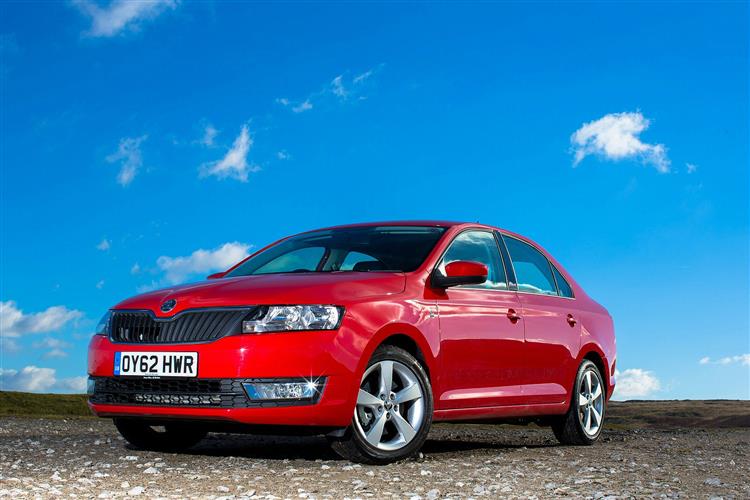