TO B OR NOT TO B (some text hidden)

Is there any point in a People Carrier if it's a really small one? It's a fair question that supermini-MPV models in the Nissan Note, Citroen C3 Picasso and Vauxhall Meriva segment have often struggled to answer. When Ford's B-MAX was launched in 2012, we at last got a credible response to that query, its unique design and unrivalled versatility offering more ways to use a car of just 4m in length than you might ever have thought possible.

The smallest sort of people carrier evolved in the 21st century's second decade. In the Noughties, we had so-called supermini-MPVs, cars like Nissan's Note, slotting in below compact Scenic and C-MAX-sized designs, but usually, they offered little more than a slightly pumped-up take on the usual small car theme. New brands entering this segment needed to try harder. So we saw Citroen re-define the amount of space this kind of car could provide with their rounded but squerical C3 Picasso, Skoda offer us more avant garde styling with their Roomster and Vauxhall deliver rear doors that open the opposite way out in their Meriva. Interesting though these various approaches were, none of them really advanced the small people carrying proposition very far. But here's a car that did; Ford's B-MAX. Launched here in the Autumn of 2012, it scores on its doors, but in a very different way to any of its rivals. This was the first car of this kind to use sliding side doors and, more uniquely still, the first to do away completely with a central B-pillar so that with the front door open, there's an enormous 1.5m of cabin aperture width, stretching all the way from windscreen to rear hatch. A far more innovative design than the Blue Oval bought us with this car's direct predecessor, the Fusion. And there's equal brilliance beneath the bonnet, with the option of a three cylinder 1.0-litre EcoBoost petrol engine that provides a decent alternative to diesel. The idea was to attract the kind of buyer who wants the versatility of a larger C-MAX-style compact MPV but needs something easier to park and cheaper to run. The B-MAX sold steadily until it was discontinued in 2018.

What You Getword count: 855

Imagine the effect of shrinking Ford's large S-MAX people carrier in a hot wash and, if you're familiar with that model, you'll get a mental picture of, well, pretty much what we have here, a design 11cms longer than a Fiesta from this era but 32cms shorter than the C-MAX, the next model up in Ford's people carrying hierarchy. This design uses Ford's 'Kinetic' design 'language' and by and large, the stylists did a pretty effective job in disguising what has to be an awkward shape, with its short wheelbase and tall body. There's plenty to distract your attention from that anyway, with unique B-MAX touches wherever you look. The Aston Martin-like front grille might be the first distinguishing feature you notice but more important of course is the issue that dominates discussion every time talk turns to this car: the doors. The front ones open normally but the back ones slide aside on cleverly concealed runners, so parents need have no more worries about their offspring re-sculpting the side of adjacent parked cars in tight supermarket spaces. And with the side doors open, you're ready to admire this car's party piece: the absence of the kind of centre B-pillar that almost every other car in the world has to have for structural rigidity. Here, that same stiffness is provided by the edges of the doors themselves when they shut tightly together, clamping themselves against the body. What this ingenious piece of so-called 'Easy Access' design creates is a car that's incredibly easy for anyone of any age to get in and out of. And get things in and out of. With both side doors open, there's a 1.5m-wide aperture, into which you can slide items of up to 2.34m in length if you've taken up the option of folding flat the front passenger seat. IKEA flat packs? No problem. Bicycles? Yes, they'll go in from the side too. Of course, most of the time, you'll still be loading stuff like that in through the boot. Though bigger than that of a rival Nissan Note, this is, at 318-litres, about 15-20% smaller than most other obvious supermini-MPV rivals, but you can make the most of the space you have by specifying a load area organiser that'll separate your eggs from your Iron Bru. Standard is an adjustable load floor that you can set to create a completely level loading area for when you push forward the split-folding rear bench (with a simple 'one hand-one motion' action) to reveal up to 1386-litres of total fresh air. This car though, has primarily been packaged for people - and the lives they lead. Thanks to the pillar-less Easy Access system, it's simplicity itself to lean in and install a child seat or to help in an aging relative. Once inside, there's an airy feel, even if you don't opt for the full-length panoramic glass roof. More importantly, despite the diminutive 1.8m width, you can just about accommodate three adults across the back seat who'll have more head, leg and knee room than they would enjoy in most rivals, despite the lack of the sliding rear seats that some of those competitors offer. Children of course, who're less likely to complain about the lack of a central arm rest, will be the more likely occupants - which might lead you to wonder about safety issues should the car start off with one of the sliding doors not fully shut. It is an issue: the doors, after all, are heavy things weighing about 55lbs and will crash shut with some force if left loose before sudden sharp braking. But there's a loud warning alarm that'll alert the driver way before this happens and in any case, a responsible parent would have his or her children strapped firmly in at this point. And up front? Well, with an overall vehicle height that's 12cm higher than a Fiesta, you get all the benefits of what Ford calls a higher 'command' seating position. The seatbelt here has of course to be anchored to the seat itself, there being no B-pillar behind your right shoulder to attach it to. From this pleasingly prominent position with its height and reach steering wheel adjustability, you marshal the controls of a dashboard that's easy to operate if you speak fluent Ford. In front of you, there's a twin-dial instrument binnacle topped with lovely soft-touch plastic that contrasts with the harder, scratchier surfaces on the door tops, the glovebox and the centre console. At least build quality from the Romanian factory seems solid. Ascend the range and there's a huge difference in cabin ambience, from the plainness you get at entry-level to the plush feeling of top models who've niceties like a ritzy Sony-branded eight-speaker stereo system. Distinctive features include the slim, wing-like section of the upper instrument panel which reaches out to the door panels. And the prominent centre console, which flows down between the front seats. As for storage space, well a rubberised slot to park your smart 'phone in would have been a useful addition but otherwise, all the usual nooks and crannies are provided. 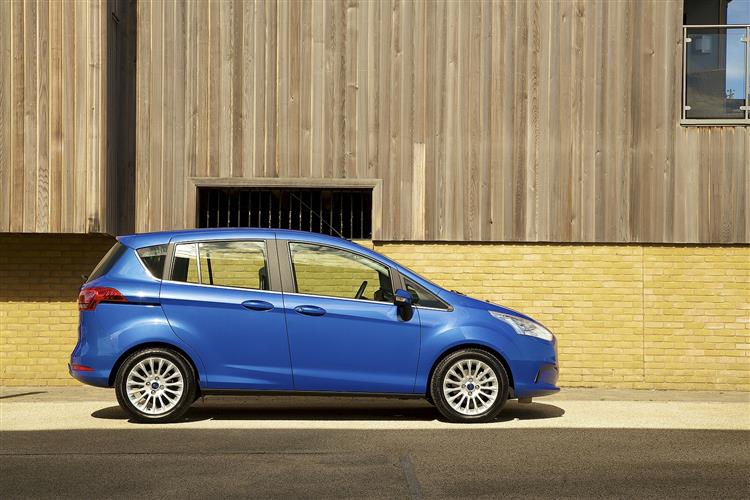