Solid as a rock, tougher than granite and impervious to the sands of time, there's nothing quite like a Mercedes G-Class. Politically incorrect, hugely expensive and compromised on-road, it won't satisfy those simply after a Range Rover or Mercedes GL-Class-style luxury SUV. But those in search of the most awesomely capable off roader money can buy will love the thought of owning one.

You know the real thing when you see it and, when it comes to off roading 4x4s, this is the real thing, the Mercedes G-Class. The 'G' stands for 'Gelandewagen', which roughly translates as 'go anywhere car', 'go anywhere' in this case meaning just about any inhospitable part of the globe you can think of, from the Sahara desert to -53-degrees C in the Siberian Arctic. Ordinary luxury SUV buyers, in other words, need not apply. And yet they do. Over thirty years after it was originally launched for Cold War military use as well as civilian transport, the G-class these days enjoys a new lease of life as a fashion icon you're as likely to find on the Kings Road as in the Kalahari. This hand-built off-roader is the longest serving passenger car in Mercedes-Benz's 120-year history, with a track record that includes everything from the transportation of two Popes to an outright win in the gruelling Paris-Dakar Rally Three decades have seen this car successfully overcome any obstacle it has encountered - including obsolescence. Which is why it's still going strong, offered in modernday form with a choice of six cylinder diesel or in wild AMG form with petrol V8 power. The concept behind the 'Gelandewagen' was first mooted to Mercedes by the Shah of Iran in 1970 and civilian versions arrived in 1979. The '463'-series model we look at here was first launched in 1990 and sold until 2018, when the car was thoroughly re-engineered for the modern age. It's the pre-2018 G-Class model we look at here as a used buy. Only a Land Rover Defender could rival this SUV off road, a utilitarian alternative with feeble diesel power that few would want to run as everyday transport. The Gelandewagen, in contrast, manages to be just as capable, yet at the same time as powerful and luxurious as any Range Rover. It is, quite simply, unique - but then uniqueness can take many forms, not all of them desirable. Let's check this car out.

By anyone's reckoning, this is an unlikely fashion accessory. Yet despite a setsquare shape with the aerodynamic qualities of a semi-detached house, that's exactly what this G-Class has become. We're looking here at the W463 series third generation model, first introduced way back in 1990. Other markets offered buyers short wheelbase hardtop or convertible three-door variants but here, only long wheelbase derivatives were on offer, all hand-built for Mercedes by off road specialists Steyr-Puch in Graz, Austria. All models sit on the same, tough ladder-frame chassis and use the simplest mechanicals to ensure that they can be easily serviced and maintained in all parts of the world. Some of the bits are borrowed from Mercedes commercial vehicles and there's definitely more than a whiff of LCV once you take your high-set seat in the cabin. From here, you'll need no convincing of this Gelandewagen's half century of heritage thanks to ergonomics that remind you just how much automotive design has progressed since the late Eighties. Hence the upright driving position, the appalling low-set sat nav placement and the siting of the gearstick miles away from where you'd ideally want it. To be fair, the interior design team have made some effort to justify the asking price with leather upholstery and burr walnut trim but you don't have to look too far beyond this to discover the lashings of utilitarian black vinyl that surround it. But again, it's all down to your expectations. This is essentially a car that was designed back in the Eighties, so expecting it to rival a modern large luxury SUV for interior ambience is a bit ridiculous. Anyway, it's certainly practical, the boxy glassy shape offering good all-round visibility marred only by that huge spare wheel on the rear door. Which, when you come to load up the boot, makes said door a pretty heavy thing to swing back and forth. Still, get it open and a huge boot reveals itself. Push forward the rear seats and there's a removal van-like 2250-litres of space on offer, about the same as the more car-like GL/GLS-Class model from this era and easily dwarfing the 1950-litres you'd get from an apparently enormous Mercedes E-Class Estate. Both of those models of course can seat up to seven people, not an option for G-Class customers, despite this car's enormous 4.6m length. Still, for those you can carry in the back seat, things are relatively spacious and comfortable - at least for two adults. Three will be a bit more of a squash but kids will be fine and will love the commanding view out. 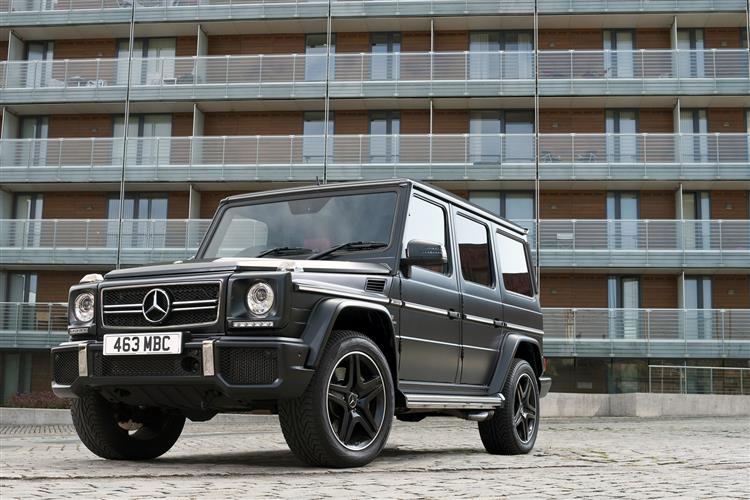