The Renaultsport team in Dieppe followed up their first hot Megane model of 2003 with this second generation coupe model, launched in 2010 in 250hp guise, then later upgraded to the 265hp form we're going to look at here as a used buy. This car may be more affordable and less powerful than the ultimate hot hatch elite but it can take on any of them in a straight fight. There's even a version to suit you if you're not a hard-core enthusiast. Drive it though and you may well become one..

In a gloomy motor market, hot hatches are one of the few bright spots for mainstream auto makers. More than three times as many of them are being sold across Europe than was the case just after the turn of the century when Renaultsport got started. So it would be fair to offer the French maker's competition division at least some of the credit for reigniting interest in the shopping rocket segment. Especially when it comes to Golf or Focus-sized models. Their original Megane Renaultsport hatch of 2003 garnered over 26,000 sales across the continent, leaving its successor, this replacement coupe version launched in 2010, a great deal to live up. Most class-leading hot hatches - Golfs, Focuses and so on - are great because they build on the established dynamic excellence imbued into the standard models upon which they are based. In contrast, for all its many virtues, an ordinary Renault Megane would, you'd think, never be a car likely to sire something sensational. Yet with the Megane II Renaultsport, the Dieppe division engineers eventually managed to deliver just that. The car was first launched in 250hp form, then upgraded to 265hp in 2012. At top 275hp 'Trophy' version was added into the top of the range in 2014 and the model line-up sold until 2017.

Some previous Renaultsport products have looked rather Max Power, a boy racer image that potential customers would often generally rather avoid. Hence a look that back in 2010 was classier than anything the French brand had yet provided to the hot hatch market. Unlike many of its rivals, Renault saw no market for five doors in this sector back then, so this car was based exclusively on the three-door Megane Coupe bodystyle, though with enough styling changes to make it feel a very different product, both inside and out. In your driveway, it'll certainly appear purposeful, with a ride height that's 20mm lower than the previous model. Park it face-out if you can. That way, enthusiast neighbours will note the larger air intake in the front bumper, complete with its F1-inspired aerodynamic front blade and optional LED daytime running lights. The sides have pronounced sills and wheelarch extensions (though they're unfortunately plastic rather than part of the sheet metal) that draw your gaze to the lovely 18 or 19" alloys, whilst at the back, an elongated spoiler and central exhaust are incorporated into a small diffuser. At the wheel, the driving position is brilliant, aided by the fact that you can position the seat nice and low: grippy Recaro chairs were a desirable option for original buyers. A leather-trimmed flat-bottomed steering wheel has neat yellow stitching that echoes the brightly-coloured rev counter. This, like the speedo, is analogue rather than digital as in commoner Meganes from this era - and all the better for it. The headrests, dashboard and rev-counter all carry the Renaultsport logo, but it's tasteful rather than tarted up, just as you'd want for this much money. Being based on a coupe, you won't expect this car to offer as much back seat room as boxier hatchback rivals and it doesn't. Head and legroom are just about OK for two adults on short trips, but the rising rear side windowline makes a seat here feel oppressive. Still. perhaps we shouldn't nit-pick: the original Megane Renaultsport model didn't offer any rear seats at all. The Coupe shape also irritates when it comes to backward visibility through the rear hatch - suffice it to say that the standard parking sensors are essential - but at least when you raise it, there's 344-litres of loadspace on offer, with a further 33-litres more for items you want to keep out of sight under the boot floor. If that's not enough, pushing forward the split-folding rear bench increases the total figure to 991-litres. 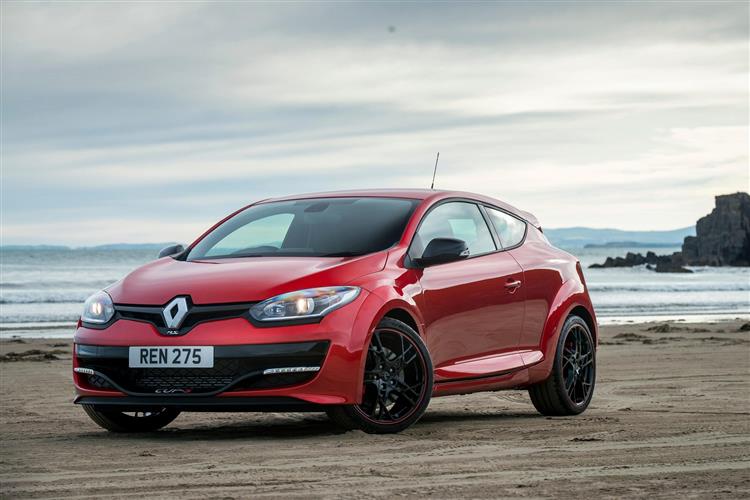