AN A1 THAT HAS YOUR BACK (some text hidden)

Choosing your Audi A1 in Sportback form gets you an extra couple of doors and adds an even more premium feel to this, the market's classiest small car. Luxury makers often cut corners to drive down the cost of their smaller models and it shows. Not Audi. In any form you choose, this A1 Sportback will always feel reassuringly expensive. The price tag might seem that way too - until you balance it against class-leading running costs that make this car surprisingly affordable to run. This was a model that brought big car standards to the small car marketplace, particularly in this post-2015-era improved form, in which it was smarter, more efficient and better-equipped. Let's check it out as a used buy.

When it comes to building aspirational cars, there aren't too many companies that Audi can learn from, particularly when it comes to less expensive models. There's something very special in the way this German brand can turn what are sometimes fairly proletarian ingredients into something beautifully presented. Something like this - the much improved post-2015-era first generation A1 Sportback. This is the five-door version of an A1 model that, following an original launch at the end of 2010, brought a whole range of new attributes to the small car segment - many of them things the sector had never seen before. Standard Volkswagen Polo underpinnings were here finessed into something altogether more hi-tech and sophisticated, the kind of result that's possible when, as a brand, you're prepared to spend over 2.5 billion euros a year in product development. The A1 was something of a trailblazer. This, after all, was the very first premium brand five-door supermini and creator of a little market niche that satisfied people who required a Fiesta or Corsa-class car, but wanted a much nicer one. Customers who either weren't able or simply didn't need to stretch up to larger Focus-sized premium compact hatches like the BMW 1 Series, the Mercedes A-Class and Audi's own A3. The A1 Sportback we're looking at here was updated in 2015 with more efficient engineering and extra technology to create the model we're going to look at in this guide. In its era, it remained the least expensive way of bringing a premium badge onto your driveway, while still preserving a modicum of practicality. In this form, the car sold until mid-2018, when a second generation design (offered only in five-door Sportback form) was announced.

What You Getword count: 774

This is exactly as you'd expect a miniature Audi to look, yet the styling of this car also gives the A1 a bit of its own personality: it's more than merely a scaled-down version of the larger A3. Forget all the retro stuff you'd find on a MINI or Fiat 500: the Ingolstadt brand has no patience with any of that. This is all far more sophisticated, with a continuous, pronounced shoulder line that runs from the trademark single frame front grille, then along the flanks before wrapping around the rear. The Polo parentage certainly isn't obvious, the wheels set more widely apart, the body riding a little lower. It's all neat, confident and very classy, with the finished effect being especially smart if you get a car whose original owner specified the contrasting roof that's unique to the more versatile Sportback body style. In creating the Sportback shape, it would have been easiest simply to cut a couple of rear doors into the existing three-door bodystyle - but that wouldn't have been very Audi. So instead, the original A1 five-door design was revisited from scratch, resulting in 6mm more width and height for this Sportback model, plus a B-pillar located 23cm further back and a roofline that's 80mm longer to facilitate headroom in the rear. As for the changes made to this improved post-2015-era version, well you'd need to be very familiar indeed with the first generation A1 model range to notice them. The enhancements mostly centred upon a front end featuring revisions to the air intakes and the fog lights, as well as revised bumpers with more powerful contours that made this updated car 19mm longer than the original design. More overt were the updates made to the wider, more distinctive Singleframe front grille that's flanked by restyled headlights that were in this form able to incorporate hi-tech xenon plus technology. The subtly restyled tailgate lamps are another beautifully crafted part of this car. If Xenon headlights have been fitted, the tail lamps are made up of 54 SuperRed LEDs, emitting an intense, deep red colour. But of course, other drivers won't be able to see them at night when the hatch is raised, so when that's up, these extra lights on the backs of the C-pillars illuminate for improved roadside safety. The loading lip is a comfortably low 66cm and once you get your stuff above it, you'll find a 270-litre boot that, a little disappointingly, is the same size as it would be with the three-door A1 bodyshape. That means it's not huge but the space provided is par for the course in the five-door supermini segment - and about the same as you'd get from a five-door MINI Hatch. Plus you can make very good use of the room on offer if you get a car whose original owner paid extra for an optional luggage package which features divided storage compartments under the loading floor to prevent your bottles of Coke scrambling your eggs on the way home. If you do need extra room and can fold down the back split-folding back seat (a process that doesn't require removal of the headrests), then up to 920-litres of space is available, again, the same as you'd get in a three-door A1. Enter in through the long doors and you'll discover what you probably will have expected to find: the smartest cabin in the class, enhanced on most versions of this improved model with extra chrome and high-glass black detailing. There's a centre console that's supposed to be styled like a ship's stern and a dash apparently modelled on the shape of an aircraft wing, the fascia section decorated with large circular air vents designed to resemble jet engines and which original buyers could trim in personalisable colours. The knurled metal heater controls are particularly smart and above these, you might expect to find the kind of centre-dash colour infotainment display that's becoming increasingly common in modern superminis but instead, in an up-market touch, this is secreted away in a fold-out panel on top of the fascia. It doesn't glide up electrically as it would on one of Audi's larger models but it's still one of the features that makes this cabin feel like that of a much more luxurious car. Access to the rear in the Sportback variant is obviously aided by a longer roofline, but you shouldn't get your hopes up too high with regard to the potential space inside. This is after all, still a supermini measuring under 4m in length and the wheelbase of the five-door body style remains unchanged from that of the alternative three-door model. 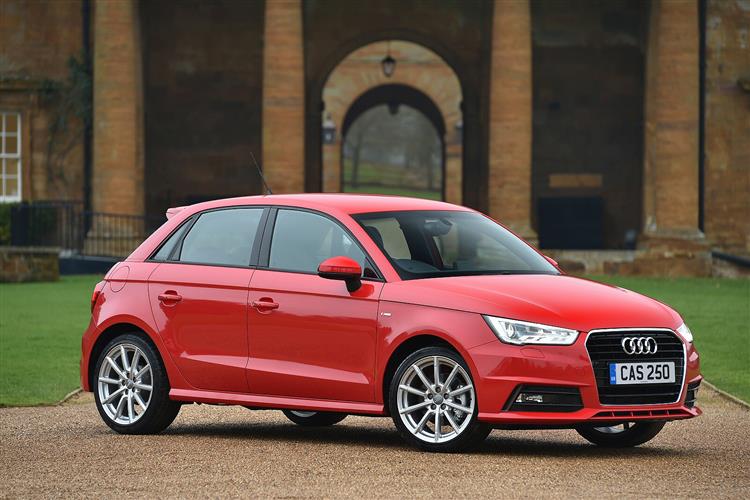