RETURN OF THE ST (some text hidden)

The much improved third generation Focus ST that Ford launched in 2015 was smarter, classier and more dynamically adept. In hatch or estate guise, with petrol or diesel power, it proved to be a car that was easier to get the most from. And a machine that buyers could enjoy to the full on their favourite roads without afterwards having to pay for it with the kind of over-firm ride that they simply wouldn't want in everyday traffic. Ultimately, so many quick cars can feel.. well, rather irrelevant. Here's one that's anything but. Let's check it out as a used buy.

ST' is a badge that, when it comes to Ford, stands for 'quick but not concussive', a performance level that sits just above the company's fast-but-family-friendly 'Zetec-S' models. But just below their track-spec RS derivatives. A badge applied to the kind of car a red-blooded racer could afford, enjoy and use every day. A car like this - the much improved third generation Focus ST that sold between 2015 and 2018. It's the kind of car that's always democratised performance, giving you the speed of a supercar within the body - and the budget - of something much more ordinary. Other brands promise this kind of thing but in reality, often do little more than bolt a set of spoilers and a turbo onto something more ordinary. Ford though, has a different approach, the Blue Oval brand boasting a long history of developing proper performance versions of its mainstream models, designed by enthusiasts to be driven by enthusiasts. That was a perfect definition for the very first properly quick ST Focus, the MK2 model of 2005. That car was rapid, both in speed and in the way that its 225PS 2.5-litre turbo engine drained its fuel tank in next to no time. Hence the need for this third generation version, a design first launched in 2012 and a model in which Blue Oval motorsport DNA had to be matched with manageable running costs. Ultimately, it was a car that had to be as adept at cruising to Silverstone as it would be when lapping it. In principle, this sounded suspiciously like a recipe for compromise - the kind of thing indeed you'd expect might have been necessary from what was the company's very first global performance model, a car developed in one spec for over forty worldwide markets. In fact though, the original version of this ST turned out to be a very likeable family hot hatch indeed. Its EcoBoost turbo petrol powerplant was efficient, pricing was very affordable and the car was blessed with a class-leading ride and handling combination. It wasn't perfect mind you. There were prettier contenders to be found in the Focus-sized shopping rocket segment - and certainly plenty with much higher quality interiors. Plus drivers wanting to use this Focus's full 250PS in anything but a straight line often had to cope with a bit of torquesteer and general waywardness. Fortunately, Ford had a package of improvements in mind and has delivered them with the improved facelifted MK3 model we're going to look at here as a used buy, a car first brought to market early in 2015. It was certainly much smarter and with this version, ST buyers got the option of diesel power for the first time, available alongside a more sonorous and slightly more efficient version of the same EcoBoost petrol unit the car had before. Either way, the engineers reckoned that handling modifications would enable owners to transmit torque to tarmac a little more easily than had been possible before. While inside, the company claimed to have provided a much nicer cabin that would narrow the quality gap to this car's much pricier Golf GTI arch-rival. This improved MK3 Focus ST sold until 2018, when an all-new Focus range was launched.

What You Getword count: 600

Ford has learnt sporting subtlety in recent years - to the point where you might even find this Focus ST's aesthetics a little on the modest side, especially if you opt for the practical estate bodystyle that's offered as an alternative to the five-door hatch. There was no rakish three-door option, but the stylists did their best to spice up the two more practical body shapes that were on offer with careful detailing that offered a more muscular take on the kinetic design of the standard model. And inside? Well, take a seat and at first glance, things are much as with the original version of this third generation design, the cockpit marked out from that of humbler Focus models primarily by two 'ST'-model hallmarks. First up, most will love the grippy Recaro sports seats, chairs that might be a little tight for those over-familiar with the offerings of Colonel Sanders. The other key ST distinguishing feature can be found on top of the dash with a bank of three extra gauges that deal with turbo boost pressure, oil temperature and oil pressure and are there to serve as a nice visual throwback to legendary fast Fords of the past like the Escort Mexico. The sports pedals and satin chrome-topped gearknob are bespoke-fit items, as is the steering wheel, a flat-bottomed multi-function item with soft-feel leather trim. For those familiar with the pre-facelifted version of this model, the main improvement will be the cleaner, classier look of the dash. Go for a version of this car with Ford's SYNC 2 infotainment system and many of the functions that would have previously been dealt with by fascia controls are accessible via menus in the 8-inch colour touchscreen. As for rear seat space, well fears that the curved rear roofline will severely compromise headroom turn out to be groundless, though the wedgy side profile does hem you in with a slightly higher window line. You sit high-ishly positioned for a good view of the road ahead and both head and legroom are adequate, even for a couple of six-footers. As usual with cars in this class, three adults will be rather squashed here, but a trip of kids should find the space provided quite sufficient. And out back? Well, when evaluating boot space, you have to take into account that this Focus uses the kind of sophisticated multi-link rear suspension set-up that many rivals make you do without. This is bulkier than a cruder set-up, which is why when you lift the rear hatch, you'll find slightly less cargo room than rival models will offer. In this estate version, for example, there's 476-litres on offer - and you only get that if you find a car whose original owner chose to do without the optional space-saver spare wheel. In comparison, a SEAT Leon ST Cupra Estate would give you 587-litres, while a Volkswagen Golf GTD Estate would give you 605-litres. Most Focus ST buyers will be opting for the hatch model which offers 316-litres without any kind of spare wheel - again, some way behind the class norm. Will that be an issue for potential Focus ST customers? Well, it didn't seem to be with the original version of this car. Plus of course you can push the 60/40 split folding rear bench forward, though you do have to flip the seat bases up first, which is a bit fiddly. Still, once that process is completed, you get a completely flat load area and as much as 1,502-litres can be freed up in this estate model - or 1,101-litres in the hatch. 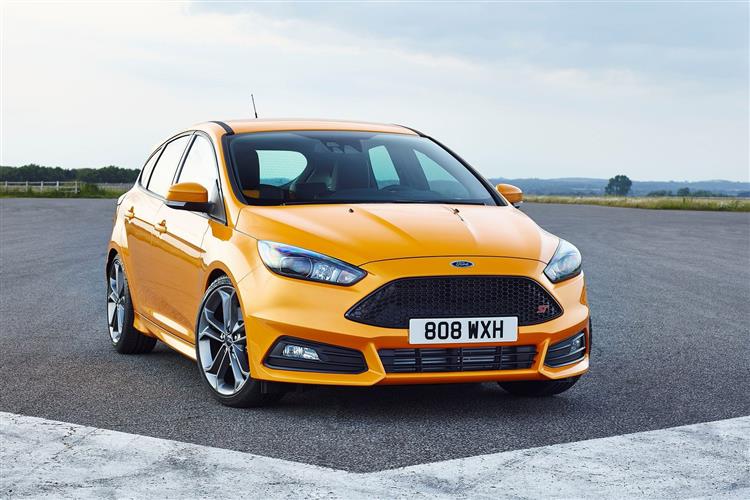