Ford's Transit has ruled the British large LCV market for around half a century, its very name synonymous with its purpose. In the past, this may have had a great deal to do with tradition and the vast choice of derivatives on offer but today's sales success is very much down to quality of product. Four products make up the modernday Transit range. Transit Connect and Transit Courier models look after customers with more compact cargo carrying needs, but here we're going to look at a larger option, the Transit Custom. Launched in 2013, it slotted into the range beneath the largest model, known simply as 'Transit', and was intended to take on Vito and Vivaro-sized Medium-sized vans in the volume part of the LCV sector. It's a very complete commercial vehicle indeed. And a good used buy? Let's see.

Think of a large-ish van and it's a pretty sure bet that you'll be thinking of this one, Ford's Transit, the self-proclaimed 'backbone of Britain'. And it's true, thousands of British businesses do indeed depend on this vehicle. So successful has it been on these shores since its original launch back in 1965 that its very name has almost passed into our language, a byword for van versatility. By 2013 though, Ford had realised that its Transit product offering needed looking at. Previously, potential customers had been faced with a wide, unwieldy range attempting to be all things to all businesses. So things were changed and a four-model Transit product line-up developed. The market was given a couple of compact models with 'Connect' and 'Courier' badges, a really large version simply called 'Transit' and the vehicle we're going to look at here that sloted in somewhere in between - the Transit Custom. The Custom hits the sales sweet spot in the medium range LCV marketplace for a vehicle not too big - and not too small. Here was Ford's answer to European market leaders like Volkswagen's Transporter, Mercedes' Vito, the Peugeot Expert, the Citroen Dispatch, the Renault Trafic and what on these shores, we know as the Vauxhall Vivaro. To deal with such tough opposition, the Blue Oval brand offered an enormous range of choice to British businesses, with over 300 Transit Custom derivatives on offer. Not bad when you remember that there were just 75 variants available when the original model Transit was first launched back in 1965. As a result, whether your large van needs are to carry packages or people, then this Ford remains a used LCV option that you simply can't ignore. A facelifted Transit Custom range was introduced early in 2018, but here we look at the pre-facelift 2013-2017-era models. These were launched with 2.2-litre TDCi diesel engines, but in 2017, Ford replaced this unit with a more powerful Euro6-compliant 2.0-litre 'EcoBlue' powerplant. And at this point, a 'SelectShift' auto gearbox was made available with the 130 and 170PS models.

A van needs to look smart, modern and professional. This one does, with signature kinetic design features that bring a sportier stance and bold rising shoulder line, clearly marking out this design as a cargo carrier very much of its time. Pride of place on the bold trapezoidal front grille goes to the biggest Blue Oval badge that Ford uses on any of its vehicles worldwide. A pity though that you don't get the steps provided on the front bumper that on the previous generation version enabled owners more easily to climb up and clean the screen. When it comes to the bonnet, one nice security touch is that you'll need your ignition key to open it. Inside, the cabin design is very different from previous generation Transits, the dash featuring the same herringbone-style layout for stereo and 'phone functions and blue backlit infotainment display used in Ford passenger cars from this era. It doesn't quite have the same hewn-from-granite feel you'd get in a Mercedes Vito or a Volkswagen Transporter, but the overall level of fit and finish is a big step forward in terms of what you expect from a Transit. Certainly, the cabin itself is a well thought-out piece of design work, normally a three-seater in straightforward panel van guise or a front two-seater in the double cab-in-van model form. Getting comfortable at the wheel is certainly easy thanks not only to a height-adjustable driver's seat but also, at last, to the provision of a steering wheel that can be adjusted for both height and reach. If you're tall, it'll also help that the comfortable driver's seat now has an extra 30mm of extra rearward travel over the previous generation model. Most models get the option of being able to fold down the middle of the three seats to create an impromptu desk big enough for a laptop or a clipboard with two cup holders, a pen tray and an elasticated band that'll keep your paperwork in place. We also like the way that folding the base cushions of both the passenger seats forward opens up a roomy, concealed 93-litre storage area for hiding away valuable items like tools. Smaller things can be stored in the lockable glovebox in which you can hang A4 folders. In fact, when it comes to the cab storage of smaller things, there are few other vans that can match this one, Ford's research identifying the fact that this was a key priority amongst users. So each of the cab doors gets a couple of stowage bins, the upper one able to hold a flask of tea or a 2.0-litre bottle. Separate cup or bottle holders can also be found at either end of the dash. We really like the lidded shelf on top of the fascia just above the instrument panel, concealing as it does not only a powerpoint but also a socket for an MP3 player. On to loading practicalities. Like rivals, Transit Custom models come with a pair of conventionally hinged side-opening twin rear doors that open to 90 degrees and can then swing through to 180-degrees. It also helps that unless the load you have in mind is really heavy, then you're not going to need a forklift - the loading height is, after all, can be as little as 583mm from the ground. Certainly the bulky stuff should go in OK, with even the low roof version offering a rear door aperture 1400mm wide and 1340mm high, though of course that'll be higher if you've gone for the high roof option. The roof height, along with your selection between short and long wheelbases, will also of course determine your load space volume. At the bottom of the range, short wheelbase low roof customers get a very decent 6.0m3, which, thanks to a load space length of 2555mm and a class-leading width between the wheelarches of 1,390mm, is enough to make this the only vehicle in the SWB medium range van class able to transport up to three euro pallets with a one metre-high load. Or for you to carry 8'x4' building boards (that's 2,440mm by 1,220mm) either vertically at the edge of the bulkhead or flat on the floor. Make use of all that space and you'll be glad of a payload of at least 883kgs. So, in short, you may not need the long wheelbase version, but if you do, then you'll find that the extra 0.37m of length is enough to up the loadspace volume to 6.8m3, while to match it, payload rises to anywhere between 1,014 and 1,414kgs, depending on the Gross Vehicle Weight you choose. Whatever Transit Custom model you choose, it'll get a sliding side door with class-leading height and width (1,320mm high in lowroof form and 1,030mm wide). Of course, on Double-Cab-in-Van passenger-carrying variants, the side door is reserved for the use of rear seat occupants - and the need for their compartment means a necessarily restricted luggage bay at the back - in SWB models down to 3.5m3, with a loadspace length of 1577mm. Probably better in this case to go for a LWB version where the packaging compromise is less acute, these variants delivering a 4.4m3 load volume and a loadspace length of 1944mm. Once you've got your cargo in, there's a fitted vinyl cover to protect the floor, though it won't stop you scratching the wheel arches or the interior sides of the vehicle if the van you're looking at hasn't been fitted out with a full ply-lining kit. Of course, damage is less likely if you properly tie your load down, something possible in this Transit Custom with the aid of no fewer than eight different lashing points. If you do forget to use them and everything slides forward, then you'll be glad of the full steel bulkhead. Built into the bottom of it is a neat load-through hatch that enables longer items - pipes, ladders and so on - of up to 3.0m in length to be safely carried inside the vehicle. 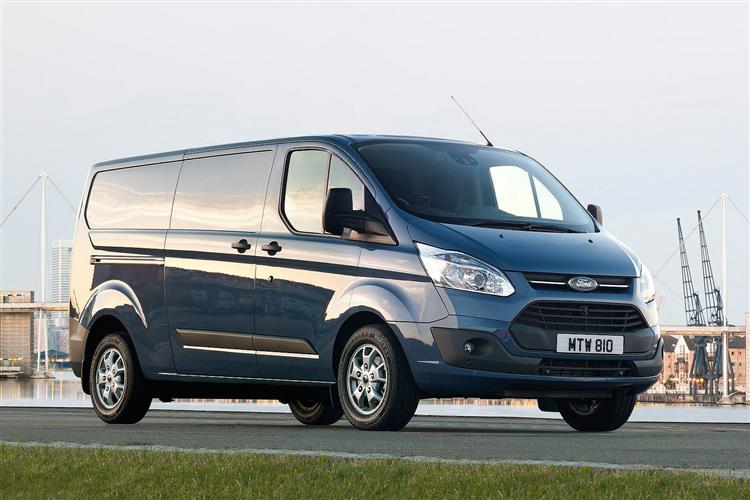