Let's see if this is you. You've done pretty well in life and you've earned the right to a prestigious executive car. You'd rather like a Mercedes-Benz - but not a dull-looking one like the guy over the road drives. If that three-pointed star could be mounted on the bonnet of something that cuts more of a dash - something a little more cutting edge - you'd be interested. And you'd be Mercedes CLS-Class target market. A cross between saloon and a coupe, this model has long pioneered an appealing niche within the executive sector as a highly distinctive proposition with comfortable room for four but styling that suggests otherwise. Though extremely refined and silky smooth on the road, it also has a subtly sportier flavour than the E-Class on which it's based, especially in the faster, more efficient and more sophisticated improved second generation form we look at here as a potential used buy.

It sounds a simple concept: combining the elegance and dynamism of a coupe with the comfort and functionality of a saloon. This car though, was the first to perfect it - the Mercedes CLS-Class. It's been around since 2004, with this second generation version launched in 2011, before being further perfected in the improved form we're going to look at here, which was introduced in 2014. It sold until the new MK3 version arrived in early 2018 and buyers were offered four-door coupe and 'Shooting Brake' estate body styles.

There's a choice of either a booted four-door 'Coupe' bodystyle or the avant garde 'Shooting Brake' estate version. Either way, under the skin, the CLS remains essentially a conventional Mercedes E-Class executive model beneath sweeping bodywork that leaves it slightly lower and longer. In MK2 guise, its proportions stayed the much same as before, the original version's distinctive long bonnet, narrow-look side windows and dynamic roofline sweeping back towards the rear all being carried over. Yet at the same time, Mercedes changed quite a lot for this second generation version, these improvements relating not only to style but also to substance. Many of the panels on the MK2 CLS are crafted from aluminium, not just to copy the rival Audi A7 Sportback but primarily to achieve the lightness necessary for this car to be faster, yet more frugal than its predecessor. Actually, as it happens, it's almost exactly the same weight as the original 2004-vintage version, but given that this second generation model is not only longer and wider but also packed with extra hi-tech equipment, that's no mean feat. Significant in their contribution here have been the frameless aluminium doors, a full 24kgs less hefty than those of the MK1 model, which means they can be opened and closed more easily, especially on an incline. With all this going on outside, you could perhaps have excused Mercedes for taking the easy way out and simply sticking an E-Class interior in the cabin. In the first generation CLS, they probably should have done just that, for the vast plank of wood that ran across its dashboard wasn't the car's most appealing feature. Here though, a much classier result has been achieved that fully justifies the high prices being asked, a cabin even the crassest vulgarian wouldn't be able to ruin with extrovert choices from the endless options list. As for luggage space, well Mercedes is well aware that this car's closest competition comes from Audi A7 Sportback and BMW 5 Series GT models, hence the availability I mentioned earlier of a 'Shooting Brake' estate version to complement this booted model. This four-door offers 475-litres of space, a total you can improve if you've paid extra for a split folding rear backrest. You can also make more of if you specify a 55-litre Easy-Pack boot box which folds away under the parcel shelf and can be extended to various depths. If that's not enough, then the 'Shooting Brake' models offers 590-litres - or 1,550-litres with the backrest folded flat. 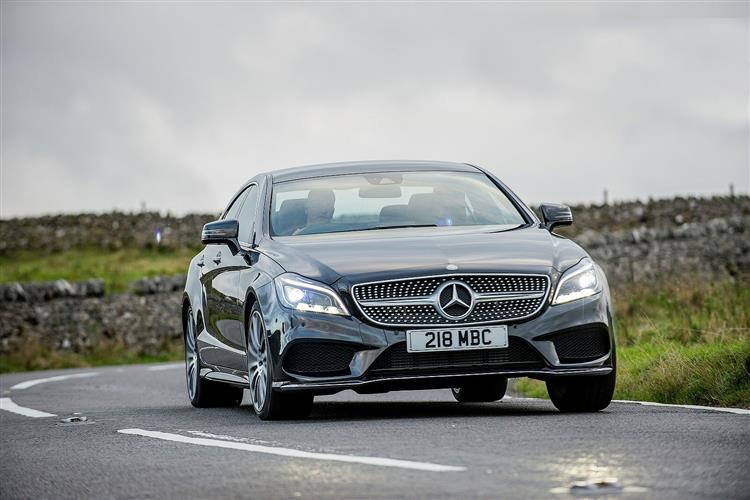