In Scirocco R guise, Volkswagen's classy coupe was let off the leash. Pitched somewhere between a high performance GTi hot hatch and a powerful compact coupe, it offers buyers the best of both in a fast, relatively affordable and very desirable package.

Hot Hatch. Just saying it brings to mind Max Power excess and pimply teenagers with souped-up shopping rockets and huge exhausts. Don't know about you but if we were going to spend serious money on something very fast, then that's not quite the image we'd be looking for. Yet most of what's available in the affordable section of the used car performance market - Ford Focus RS, Renaultsport Megane, SEAT Leon Cupra R - delivers just that. Here's a car that doesn't: Volkswagen's Scirocco R. You might argue indeed that it has more in common with powerful coupes like Nissan's 370z or BMW's 135i than any conventional GTi - and Volkswagen would probably agree with you. They provide the uber-cool 4WD Golf R for those who simply must have the most hi-tech and sophisticated hot hatch. This is something a little different, a touch more aggressive than its Golf stablemate or the coupes just mentioned without delivering something that well, you'd be a bit embarrassed to park at the country club. The perfect balance from arguably, the perfect Scirocco. This car was launched in 2009, facelifted in 2014 (when power rose from 265 to 280PS) and deleted from Volkswagen's UK range in 2017. Let's find out if it works as a used buy.

Most will agree that the post-2008-era Scirocco already looks great in its standard guises, its designer, Klaus Bischoff having created a shape that's poised, shapely, neat and suitably far removed from the three-door Golf it shares its platform with. The powerful rear haunches and the dramatic roofline that drops to meet them still stand out but Volkswagen moved to bring more aggression to the R model through its detailing. As well as riding lower to the ground on its suspension, the R features a revised front bumper sporting a trio of large air-vents with gloss black slats and LED running lights built in. There are sill extensions too and more gloss black on the wing mirrors and the brake callipers that peep from the spokes of the 18" Talledega alloy wheels (19-inchers were optional). At the back, twin exhaust pipes emerge from a gloss black diffuser below smoked rear light lenses, while a roof spoiler tops things off. The Scirocco cabin cocoons its occupants in Volkswagen design cues and build quality. As with the standard version, the sports seats aren't just restricted to those up front. The contoured rear chairs feature integrated headrests to offer plenty of support at least for short journeys for two adults, although the narrow side windows make it feel rather claustrophobic and the rear window is so small that it doesn't even fill the rear-view mirror. Up front, there'll be no complaints, the grippy sports seats providing comfort, space and a well judged driving position for the person behind the contoured, flat-bottomed three-spoke sports steering wheel. The dials illuminate in white with blue needles on this R model and there's piano black trim with silver detailing. It's still classy but with the right sprinkling of sport. Boot space, accessed through a reasonably wide aperture, at 312-litres is 37-litres bigger than the comparable Golf R from this era, although the 1006-litre figure with the rear seats folded is 224-litres less. Still, that's more than you'll probably be expecting from a sporty coupe of this class. 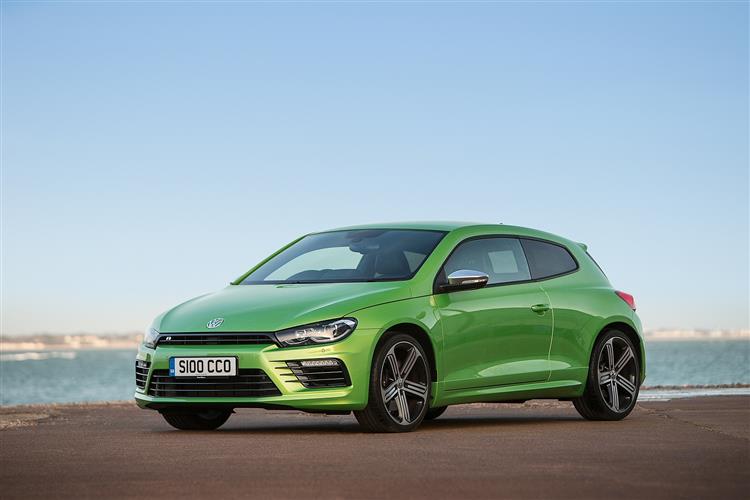