The first generation version of the Audi S7 Sportback packs a 420PS punch, a seven-speed S tronic transmission, quattro four wheel drive, air suspension and virtually all of the brand's latest performance technology into a practical but exclusively styled five coupe-style silhouette. It sold between 2012 and 2016 and on the used market, is a rare and tempting proposition for the money being asked.

It wasn't very long ago that a car like this simply wouldn't have been possible. Ferrari-style power stats with five-door family versatility. Vanishingly rare exclusivity and a hand-built interior for less than the cost of some quite ordinary large executive saloons. And, most tellingly, rest to sixty two mph in under five seconds, yet a 30mpg capability. The first generation Audi S7 Sportback looked quite a package at its launch back in 2012. This variant was launched as a performance flagship for the A7 Sportback range but later had to slot in behind the more potent RS 7 variant which made more headlines. Either way, buyers get a really hot version of the 'five-door coupe' A7 Sportback model line that Ingolstadt created to challenge stylised executive contenders like BMW's 6 Series GranCoupe and the Mercedes CLS-Class. The S7 is 140PS down on the 560PS output of its RS 7 stablemate but when new, it cost around 35% less than that car and uses essentially the same V8 biturbo petrol engine to go almost as fast. So, with a perfectly adequate 420PS on tap, this S7 makes more sense - as long as you appreciate that any concept of sense and sensibility is somewhat relative when you're talking about a 4.0-litre petrol-powered executive fastback weighing around two tonnes. And in any case, if you really were being sensible and wanted a quick A7 Sportback model, the 3.0 BiTDI quattro diesel version is significantly cheaper, 50% more economical and just half a second slower from rest to 62mph. But we'll get into that as we go along. Bottom line is that this car delivers much of what you'll find in far more expensive potently powered stylised executive cars from this era like, say, Porsche's Panamera 4S and BMW's 650i GranCoupe - for an awful lot less. The S7 sold until an all-new second generation A7 Sportback range was launched by the brand early in 2018.

You'll buy this car because of what it says about its brand and because of what it says about you, with a look that's measured, efficient, sporting and quietly exclusive. The long bonnet, the long wheelbase and the short overhangs create perfect proportions, while the swooping roofline is reasonably successful in giving this five-door model the character of a coupe. Subtle, eye-catching details around the single-frame grille, the front bumper, the side mirrors and the sills set the S7 apart from its humbler MK1 model A7 stablemates. And there are more to be found as you move further back past the 19-inch wheels with their black callipers and appreciate bespoke touches around the rear bumper, the diffuser and the tailpipes. At motorway speeds, a rear spoiler extends from the rear hatch to improve stability. The interior is similarly restrained but impressive. Everywhere you look, there's a beautiful blend of craftsmanship and technology. And a discreet reminder of what you've bought, with illuminated door sill trims and displays for the MMI and the driver information systems that highlight the S7 logo on start-up. A red ring adorns the start-stop button, an aluminum clasp the selector lever. The footrest, the pedals and the soft keys of the MMI operating system get a gleaming aluminum-style finish. There's full leather of course and at the front, multi-way power-adjustable sports seats designed exclusively for this model. The three-spoke S quattro steering wheel has colour-contrasting stitching and a set of aluminium-look shift paddles just behind it. Beyond them, you view a set of bespoke instruments featuring grey dials with white needles. Rear seat accommodation is equally beautifully trimmed, but the main drawback for family folk with three children will be that on an S7, you don't get the option that was available on ordinary A7 Sportback models of a three-person rear bench. If that's not an issue for you, then you'll find little else to criticise here. This car is, after all, a hefty five metres in length, so you'd expect two adults to be able to stretch out very comfortably here - as indeed they can. And luggage space? Well, at 535-litres, it's a little more than you'd get in a rival BMW 650i GranCoupe or Porsche Panamera from this era and you can extend this to 1,390-litres by flattening the split-folding rear seats. Not far off, in other words, what you'd get with Audi's S6 Avant estate, yet delivered in what many will feel is a more stylish bodyshape. In other words, you can see this S7's appeal. 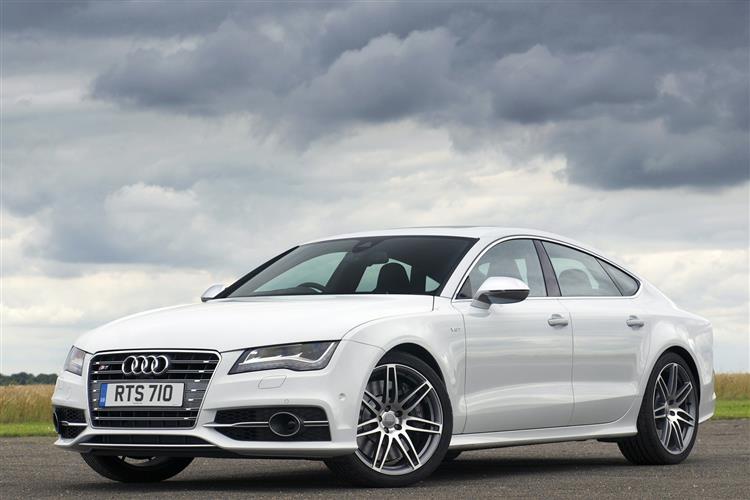