The recipe for the 'Type 4G' fourth generation Audi S6 is a tempting one. A potent Bentley-borrowed 420PS twin-turbo V8, quattro 4WD, state-of-the-art handling trickery and beautiful build quality. All wrapped up in the kind of motorsport knowhow that executive sports saloon rivals usually restrict to their pricier models. The kind of car that Audi does very well indeed.

Audi's UK sales success in recent years has been so prolific that rarity is not a word you tend to associate with any of its models. Except perhaps this one. The fourth generation version of their S6 sporting saloon and estate model, a V8 petrol-powered executive express that was sold in tiny numbers so on the used market will be a very exclusive car indeed. This model's third generation 'Type 4F' S6 predecessor used to have a very exclusive engine too, the 435PS V10 we saw in that 2006 to 2012 version basically the same as that used in a Lamborghini Gallado. That unit was seen off by emissions legislation but its replacement, the 4.0-litre V8 fitted to this fourth generation model launched in 2012, has quite a pedigree of its own. Originally developed by the Volkswagen Group for the Bentley Continental GT, its twin turbos more than compensate for its smaller size, so much so that the 0-62mph time is actually now slightly quicker than that of the MK3 V10 S6, rated at just 4.7s. That comes courtesy of a 420PS output, impressive in its own right but modest in comparison to the 560PS developed by the fourth generation A6 line-up's flagship poster child, the RS6, a car built to deal with super saloons like the BMW M5 and the Mercedes E63 AMG. Still, this S6's engine is quite enough to take the fight squarely to a select group of petrol-powered executive contenders that are merely very fast, models like the BMW 550i and the Jaguar XF 3.0 S/C. Cars that are very desirable, that almost everyone would very much like and that almost nobody buys. Hence the rarity of this S6. If you do want to own this fourth generation model, here's what you're going to need to know. It sold until an all-new fifth generation A6 was launched by the brand in the Spring of 2018.

What You Getword count: 423

You won't be considering an Audi S6 if you want to shout about your performance pretensions. This car doesn't do that. In fact, over the years, it's got the whole business of not doing that down to a fine art. A lot of it's in the detail. Audi S cars have a reputation for styling subtlety and whether you order it as a saloon or an estate, this one is no exception. For the record, this model is actually 16mm longer than a standard A6 - or 8mm longer if you're looking at the Avant estate version. First impressions though, are more likely to centre on the single frame sports aluminium front grille with its chromed horizontal double bars - a real work of art. There's more aluminium-style trim on the door mirrors (a classic S-brand touch), plus you get gorgeous sports alloy wheels, a subtle integrated boot spoiler and four chromed tail pipes surrounded by a grey diffuser. Most won't know what has just blown by and is disappearing into the distance. The interior is similarly restrained but impressive. Everywhere you look, there's a beautiful blend of craftsmanship and technology. And a discreet reminder of what you've bought, with illuminated door sill trims and displays for the MMI and the driver information systems that highlight the S6 logo on start-up. A red ring adorns the start-stop button and there's an aluminum clasp surrounding the selector lever. The footrest, the pedals and the soft keys of the MMI operating system get a gleaming aluminum-style finish. There's full leather of course and at the front, multi-way power-adjustable sports seats designed exclusively for this model. The three-spoke S quattro steering wheel has colour-contrasting stitching and a set of aluminum-look shift paddles just behind it. Beyond them, you view a set of bespoke instruments featuring grey dials with white needles. What about luggage space? Well, at 530-litres in the saloon model, it's a little more than you'd get in a rival BMW 550i or Jaguar XF 3.0 S/C from this era and you can extend this to 995-litres by flattening the standard split-folding rear seats. But if you're likely to be doing that very often, then the Avant estate version will be a better bet. This provides 565-litres with all the seats in place - or up to 1,680-litres with the rear seats flat. As a halfway house between both body styles, Audi in this era also offered the S6's mechanical package as an S7 model, a car with a 535-litre boot that's extendable to 1390-litres. 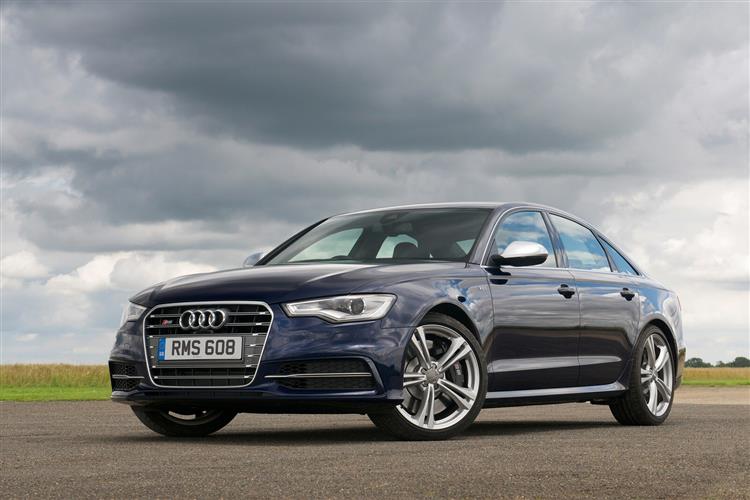