Back in 2010, Lexus launched its first compact model, the CT200h. By 2014, it was time to spruce the car up a little and if you're looking for this premium hatch on the used market, it could be worth stretching to one of these facelifted models as handling, trim and styling were all improved as part of the package of changes.

Rewind back to the beginning of the 21st century's second decade and look at the market for compact hatches with premium badges and you'll find that only one car stood against the tide of diesel-powered models; this one, the petrol/electric hybrid Lexus CT200h. The car had been launched back in 2010 and was updated in 2014 to create the model we're going to look at here. So, why did Lexus feel the need to be different? Well, quite apart from the fact that it had to be to break into the German brand-dominated prestige market, the company early on recognised a disconnect between the eco-minded claims of diesel engines and their rumbling, smoke-belching reality. You might think that by driving a diesel model with its impressive fuel consumption and low CO2 returns, you're doing your bit for the planet. The reality though, is that you're pumping harmful NOx gases into the atmosphere with toxicity that'll increase as your engine's diesel particulate filter becomes more and more clogged. Until all-electric power becomes more viable, a hybrid engine is arguably the best alternative the motor industry can offer to this scenario - technology pioneered by Lexus' parent company Toyota. Toyota it was, who founded the drive towards hybrid power with their Prius at the turn of the century, a car that back in 2010 had been developed through three generations into an impressive if rather uninspiring confection powered by a 98bhp 1.8-litre VVTi petrol engine aided by an 81bhp electric motor. Taking that package and re-branding it with a bit of extra Lexus polish was an obvious next step for the Japanese corporation to take. Hence this CT, the letters standing for 'Compact Tourer', which is Lexus-speak for the class of premium small hatchback you'll hopefully recognise when we talk of models like Audi's A3, BMW's 1 Series, Mercedes' A-Class - maybe even Alfa Romeo's Giulietta. Cars that are no bigger than something Focus or Astra-sized but sit a world apart when it comes to perceived driveway cred. Of course, Lexus was never going to make much of an impact on rivals of this quality by simply playing the green card and slapping shinier badgework on a Prius. Owners in this segment tend to be younger and want a more dynamic drive. So the CT200h development team tried to give it to them, but went a bit too far with the original model launched in 2010, creating a car with an over-firm ride that put people off. There were also objections to the quirky styling and the thrashy CVT auto gearbox, that transmission hardly helping refinement standards that weren't very Lexus-like. Underneath all of these issues though, lay a very effective piece of automotive design that with a little extra finesse, Lexus thought might exactly suit the prevailing economic mood in its segment. That was what the brand set out to deliver with the much improved CT200h model it launched in 2014, the car we're going to look at here. It sold until further revisions were made to the range at the end of 2017.

What You Getword count: 883

It is perhaps appropriate for a car that offers something different to look a little different. That was always Lexus' perspective when discussion turned to the quirky design of the original version of this model. The problem for them is though, that buyers in the premium segment are a notoriously conservative bunch - hence the need for the aesthetic changes that were made to this revised first generation CT200h in 2014, offering a much stronger visual link to pricier, more established offerings in the Lexus line-up. Primarily, that meant the adoption of the brand's now familiar spindle-shaped grille at the front, which features smart mesh inserts in the more purposeful-looking F Sport version. Otherwise, with this post-2014 model CT200h, the so-called 'L-Finesse' design language remained as is was on the original version. The five-door hatchback body style necessary to differentiate this car from Lexus' sharp, shapely but unfortunately much more expensive IS saloon still offers the same distinctive silhouette thanks to its steeply-raked windscreen and long, flowing roofline. We remarked when testing the original model that it was a shape that could benefit from a little L-Finessing, and that's exactly what happened with the changes made to this post-2014-era model. These included smaller, sleeker door mirrors, nicer alloy wheel designs for the 16 or 17-inch wheels, a smart shark fin-style roof antenna, a revised rear bumper set 20mm lower and a more prominent rear spoiler for the F Sport variant. As a result, you might be even more pleased to have it in your driveway but without the badge work, we still think the neighbours might wonder what you'd bought. But you won't be worrying very much about their opinions once you take a seat behind the wheel. Lexus does interiors exceptionally well and this one's still good enough to embarrass direct German rivals from this era. If you select a plusher-spec model equipped with leather upholstery, you'll find that the hide is tactile and beautifully finished, complemented by aluminium inserts, satin wood trim finishing and carefully-crafted soft-touch plastics. We love the brilliantly supportive six or eight-way adjustable seat, the cockpit-like feel of the low-set, perfectly-sited driving position and the way all the controls fall neatly to hand and operate with a quality click. As with the original model, the dashboard is divided into two sections - an upper display zone with an eight-inch LCD multi-display screen and a lower operation zone where you'll find the gearstick and the various system controls. We actually quite like the 'mouse'-style controller that operates the infotainment system functions but for those objecting to it, Lexus for this facelift model designed an easier-to-use BMW iDrive-style circular dial for plusher variants. Either way, the controller sits exactly where the handbrake would be had it not been replaced by a dashboard button and a rather awkward foot pedal. Ahead of you, there's a grippy leather-stitched steering wheel, which was borrowed from the IS series model for this revised CT. Through it, you view high-visibility dials that change in background colour from blue to red should you choose to switch the centre console Driving Mode controller into 'Sport'. Do that and the neat hybrid dial to the left of the speedo with its 'Charge', 'Eco' and 'Power' segments changes seamlessly to a more conventional rev counter. It's one of a whole series of lovely touches around this cabin that you only begin to appreciate after you've used the car for a bit. The way, for example, that the electric windows slow for the last part of their travel to minimise the sound of closure. If it's raining, you might also notice that the glass used repels water. And if it's cold and you crank up the heating, you'll find that the seat heaters are automatically activated too. The kind of money this car requires doesn't usually mean much in terms of real luxury any more - but it does here. As for rear seat room, well if you're tempted to complain, then you clearly haven't sat in the back of a rival BMW 1 Series, Mercedes A-Class or Audi A3 very recently. Though it suffers from a high waistline which restricts the airiness of the cabin somewhat, this Lexus offers slightly more passenger space than any of these cars, with comfortable room for too adults (as long as they're not too tall), and space at a pinch for three. But we haven't yet touched upon practicality, something you'd expect to be compromised by the need to find somewhere to stow the hybrid system's nickel-metal-hydride battery pack. As it turns out, clever packaging of this unit between the rear wheels means that it takes up relatively little boot space - or at least it does before you fold down the 60/40 split-folding rear bench. Once you do that, the 985-litre total cargo area provided is the smallest in the segment. The space occupied by that nickel metal hydride battery has to tell somewhere. Fortunately for Lexus though, it doesn't significantly impinge on the main boot area. Indeed, the 375-litre luggage bay is pretty as large as you'd get in a rival Audi A3 Sportback, a bit more than you'd get in a BMW 1 Series and a lot more than you'd get in other competitors like Mercedes' A-Class or Volvo's V40. 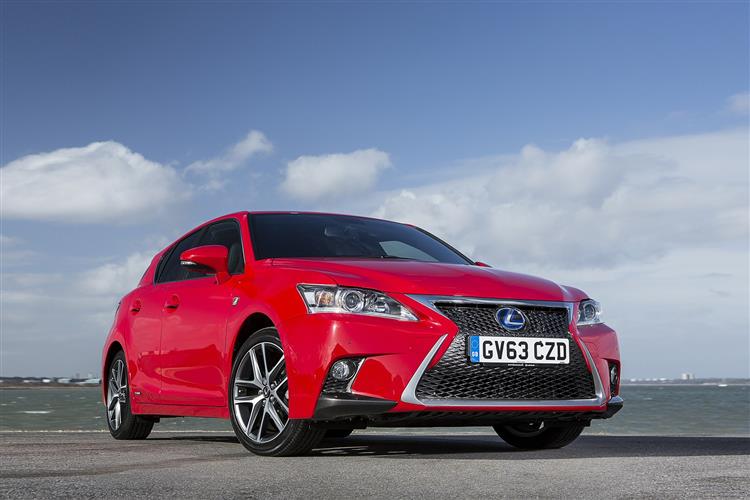