Introduction Bold and original, Citroen's C4 Cactus combines innovation, style and function in one striking, design-led piece of family transport. It won't be for everyone but if you're the sort who likes to go your own way, this compact, affordable and very Gallic take on modern motoring could be right up your street. Here, we're looking at the original 2013-2017-era version of this car as a potential used buy.

To the cynical eye, it would seem that there's very little that's clever, fresh and different about mainstream model automotive design. In fact, a common refrain amongst car buyers is that many small superminis and family hatchbacks look pretty much the same, delivering only slight and insignificant variations on a tired and well-worn theme. What the market really needs, it seems, is a mass maker able to bring us cars that are quirky, thought-provoking and forward thinking. A brand like French maker Citroen used to be: the kind of brand that today, it aims to be once more. For proof of that, in 2014, it delivered us this, the C4 Cactus. This car had no direct predecessor and - if you believe its maker anyway - no direct rivals. In buying it, you get a lightweight, comfort-orientated, bargain-priced, innovatively-designed compact family car - and if you know your Citroens, you'll know the sort of thing that kind of design brief references. Back in 1948, the marque brought Europe the clever economy runabout that would come to define post-war France, the 2CV, a model created around almost exactly the same principles that have driven development of this one. OK, so the two cars aren't quite the same: we can't see too many C4 Cactus buyers bumping their machines over ploughed fields, hosing down their interiors or passing their cars on like family heirlooms. Otherwise though, the simply, sturdy, spacious formula pioneered by the 'deux chevaux' over forty two years of production was passed over intact. There's history here then, though whether it's relevant to the modern market is another question. Many of today's buyers are certainly looking for something different from yet another standard supermini or family hatch, but they aren't necessarily attracted by wilful quirkiness. There was no place, in other words, for this car to be different simply for the sake of being so. Nor is it. All of the things that make a C4 Cactus stand out are, according to Citroen, there for a very good reason. For example, the design is full of thoughtful touches that might look strange at first glance but together will save enough weight to cut your running costs by over 20% compared against something more conventional .And, of course, you'll have noticed the 'Airbump' plastic cladding that's the first thing your neighbours will want to talk about: it's there to make light panel damage a thing of the past. It's that cladding, probably more than any other single thing, that prompted most reviewers to class this car in amongst those in the industry's fastest growing market segment, that for compact 'Crossovers', compact family hatch and supermini-based models with an extra dose of style and attitude. At the launch of this model, Citroen agreed that cars of this kind like Nissan's Juke and Renault's Captur were probably closest in concept to this Cactus but made it clear that it also wanted this particular C4 to have an even wider brief. They called it a 'Crosshatch', referencing design and positioning that here sees individuality being about more than just 'SUV-ness'. It's an approach that the French brand hoped buyers shopping in the compact car-segment would find rather refreshing. They did and the C4 Cactus sold strongly in its original form. However, in late 2017, Citroen launched a C3 Aircross small SUV that offered much of what the original version of this car delivered, causing the C4 Cactus to be facelifted and re-positioned as a quirky family hatchback, rather than any kind of Crossover. It's the earlier model though, that we consider here.

What You Getword count: 624

Come on, what other mainstream brand could really have brought us this car? You may not like it but you'll certainly notice it and want to talk about it. Some will love the look, while others will struggle to see the point. Would that all automotive design produced such clear, distinct reactions. Whatever your preferred standpoint, you can't deny the way this Citroen delivers on its promise of flamboyantly different, back-to-basics motoring with a uniquely French twist. If it's all to your taste, you'll find the whole effect supremely stylish - and sensible too. Designer Mark Lloyd believes the two issues need not be contradictory - and for proof, points at the feature most likely to get the neighbours talking when this Citroen appears in your driveway - the side cladding panels, known by the brand as 'Airbumps'. These raised thermoplastic polyurethane mouldings are like a cactus's spikes in that they're a defence mechanism, not in this case from wild animals but from everyday dents and dings caused to your side panels by things like supermarket trolleys or somebody else's car door. Indeed, Citroen reckons you could scrape a shopping trolley right down the side of a C4 Cactus and the Airbumps would save it from damage. Inside, it's equally futuristic - and will look even more so if you manage to find one of the rare automatic versions, for this variant offers a unique continuous 'sofa-style' front seat that stretches from one side of the cabin to the other, though can still only accommodate two people. In the case of the manual models you're far more likely to come across, it's a touch disappointing to have to revert to a more familiar layout, the need for a floor-mounted gearstick necessitating the installation of a couple of conventional chairs, though they're well-bolstered and supportive and have a premium feel when trimmed in the optional black leather and cloth that's featured on top-spec variants. Compensatory design flourishes that all models get include an aircraft-style handbrake, door handles inspired by leather luggage straps and, what is probably our favourite feature, the huge, stylised lidded glovebox. The reason it's so big is that the dashboard doesn't have to swallow a passenger airbag, this feature instead moved up to the roof where it's mounted just under the headlining. Otherwise, the atmosphere is simple and minimalistic, with the operation functionality of the car confined almost completely to a couple of digital LCD screens, the smaller of the two visible through the smart Bi-tone steering wheel. Take a seat in the rear and you'll be able to put the practical promises Citroen made with this car to the test, principally those suggesting family hatch standards of space despite the supermini underpinnings. In terms of legroom, this model delivers on those claims thanks to a wheelbase that was stretched to match that of the brand's more conventional Focus-class C4 family hatch. We found that a trio of kids fitted in just fine, though they complained bitterly about the fact that the windows don't go down - you only get pop-out glass-panelled hinged flaps, which at launch, Citroen said were incorporated to save weight and cynics said were there to save cost. The same two comments apply when you move back to the luggage bay and discover this to be the only C-segment-sized car we can think of from this era that doesn't offer a split-folding rear bench. Citroen says that the deletion of this feature saves 6kgs of weight, but that's a penalty we think most owners would gladly shoulder for the versatility you get from such an arrangement. Still, at least much of the time you may not need to push forward the seats thanks to a reasonably-sized 358-litre boot. 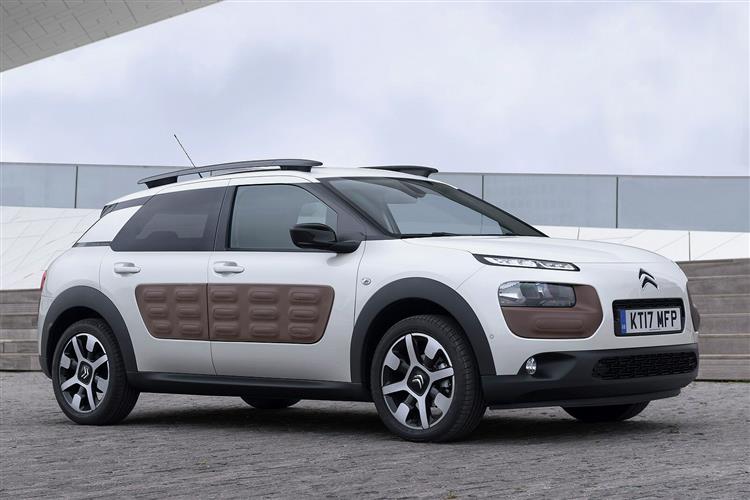