Imagine a MK3 model Mercedes A-Class hatch with a little extra practicality and a more adventurous outlook and you'll have this car in mind, the brand's GLA compact Crossover. Launched in 2014, it was the brand's answer to more premium offerings in the growing fashion-conscious family hatch-based SUV 'C'-segment and was engineered with the kind of thoroughness you'd expect from the Three-Pointed Star. Here, we're going to look at the suitability of early 2014 to 2017-era GLA models as a potential used buy.

According to Mercedes, this GLA model is 'ready to take you where no one has ever gone before'. Back in 2014, it certainly took its brand into a market segment it had never seen before, that of the compact Crossover. You'll be familiar with these Qashqai-class cars by now: ruggedized family hatchbacks on steroids that don't have the off piste capability of a Freelander-style compact SUV because most buyers don't want it. The GLA was rather late to the party in this particular segment. Prior to its arrival, BMW's X1 had been plying its trade in the premium part of the compact SUV class since 2009, with the similarly-targeted Audi Q3 on sale since 2011. This GLA compensated with stylish looks and class-leading efficiency. There was even a potent AMG-engined sports model which was first offered with 355hp, a 2.0-litre petrol turbo engine then uprated to 375hp in 2016. The original GL range lasted until the Spring of 2017 when Mercedes announced a minor package of facelift updates. Here, we're going to look at the earlier model.

What You Getword count: 965

Though Mercedes sees this GLA as part of its SUV portfolio, there's nothing very SUV about the way it looks. Inevitably, given the kind of car this is, the aesthetics do without the genre's cruder touches - things like an upright windscreen, a bluff front end or bumpers like railway sleepers: you might expect that. Buyers might though, be more surprised to find this design also doing without the sort of styling cues common to the kind of far less rugged Qashqai-class Crossover models this GLA is really designed to target. At first glance, this car really doesn't look very much different from the MK3 model A-Class hatchback it's based upon, even though it's actually 127mm longer, 24mm narrower and 59mm taller. This is essentially an A-Class with an added dose of attitude, with looks centred around a raked-back windscreen and a front end that sports big air intakes, flutes in the bonnet and smart smeared-back headlights. Smart GLA-specific touches include the way the stylists have teased out the wheel arches, adding muscularity to the look. And the sleek integration of the aluminium roof rails. In profile, as with the A-Class, there's an awful lot going on, with two prominent lines sweeping backwards from the front wing, one rising from just above the door sill and another falling from just above the wheel arch. Along with the rising beltline, they culminate just above muscular rear wheel arches, emphasising a feeling of width at the rear end heightened by the curved rear window and the sweeping chrome handle between the divided taillights. Drop inside and depending on the suspension chosen, you can find yourself sitting up to 80mm higher than you would in a comparable A-Class model. This means a more commanding view out-front from a driving position easily perfected by wide adjustment possibilities for seat and steering wheel, positioning further aided by plentiful head and shoulder room. As with most of Mercedes' compact models from this era though, rearward visibility is compromised by the swoopy roof design and the angled tailgate, hence perhaps the decision to equip this car with a reversing camera as standard. The cabin architecture of all Mercedes' smaller designs is pretty much identical from this period, which fortunately is no bad thing in terms of what you end up with here. So, as with any A or CLA-Class model, you get the same deeply-cowled twin-dial instrument binnacle viewed through a lovely, grippy nappa leather-trimmed three-spoke multi-function steering wheel. There are the same five chrome-trimmed SLS supercar-style air vents decorating a dash split into upper and lower sections. The upper part's dominated by an iPad-style free-standing infotainment screen that's stuck in the middle of it, controlled by a little rotary dial positioned where the handbrake would normally be if it hadn't been replaced by one of those fiddly electronic ones with a switch hidden away beneath the fascia. In terms of look and feel, the materials used don't quite have the rich, deep hewn-from-granite feel you get in an Audi and there are harder, cheaper plastics if you go looking for them. Overall though, the finished effect is certainly a step up from anything BMW offers in a MK1 X1 and, as you'd expect from the Three-Pointed Star, build quality is faultless. Overall, we'd say that this is probably the most interesting cabin in the segment from this era, a classy effort with plenty of showroom feel good factor. In terms of practicality, as well as spacious door bins and a reasonably-sized illuminated glove compartment, plus original buyers had the option of storage boxes beneath the front seats and a place for sunglasses in the overhead control panel. One advantage of choosing an automatic model over a manual car is that the gear shift lever moves to the steering column which means that you get space for a deep oddments bin and two cup holders in the centre console. It's when you move to the rear though, that you're more likely to realise this car's station in life as a family hatchback-based Crossover rather than a RAV4-sized compact SUV. Frankly, it's significantly smaller than one of those - as indeed this car has to be given that it must sit on the same compact 2,700mm wheelbase as its A-Class design stablemate. The prominent wheelarches mean that access is slightly restricted. Once you're inside, any thoughts of carrying three adults are hampered by the rear bench's uninvitingly sculpted middle section and the wide and rather intrusive transmission tunnel. Two passengers will be quite comfortable though - providing they're not tall folk in a GLA whose interior roof height has been lowered by the optional panoramic glass roof. And three children will be more than happy providing they don't object to the high, rising waistline. One area where the GLA clearly betters the MK3 A-Class (and its direct rivals) is in the boot. You get 481-litres of luggage space, a big jump up from the 341-litre total offered by the MK3 A-Class and around 60-litres more than you'd get in a MK1 Audi Q3 or a BMW X1 from this era. These two competitors do reverse this showing when it comes to seats-folded capacity - push forward the 60/40 split-folding rear bench (which unfortunately doesn't fold quite flat) and the 1,235-litre total is about 100-litres down on the opposition. But for most, it'll be standard luggage capacity that counts, along with the fact that the cargo bay's square shape, low loading lip and wide tailgate access make loading in heavy objects easy. If you want to extend it yet still use the rear seat for passengers, a standard Load Compartment package allows the backrest of the rear seat to be moved to a steeper so-called 'Cargo position' which will gain you an extra 60-litres. 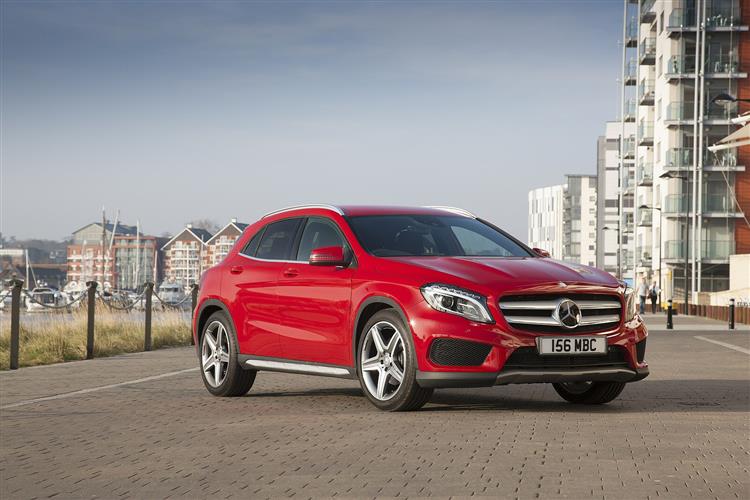