ANOTHER QUESTION OF SPORT (some text hidden)

The Ford EcoSport takes the underpinnings of the brand's Fiesta supermini and reworks them to better tackle the urban jungle. Back in 2013, this was a late arrival in the small Crossover class, but it brought the segment something different in a cute but rugged package that many target buyers liked. Compromises were made with this model's design approach, but if you're city-bound but adventurous at heart, there'll be plenty to like here.

Back in 2002, Ford did something very unusual. It missed an opportunity. The occasion was the launch of a model called the Fusion, a kind of Fiesta-on-stilts that offered a trendier, chunkier, more practical, yet more stylish take on Britain's best selling car. More than a decade on, in 2013, we were given the model that vehicle should - and could - have been. It was called the Ford EcoSport. You might recognise the kind of car this is. There are, after all, plenty of them about these days, supermini-based so-called 'Crossover' models offering SUV style and attitude in a trendier, more versatile small package. Back at the turn of the century, the Fusion could have brought the market exactly that - and done so nearly a decade before segment-defining small Crossovers like Nissan's Juke came along. Ford even presented it in trendy 4x4 regalia in motorshow concept form, but shrank back from selling the car that way in the showrooms, where it was merely presented as a slightly bigger, slightly more versatile kind of Fiesta. That mistake wasn't of course made with this EcoSport which, like its class counterparts, was marketed from the start with the full 'urban jungle' treatment. It doesn't have 4WD because the city streets and school run pavements of its natural habitat don't need it, but its raised driving position and chunky looks offer up a bit of Amazonian attitude, even if in truth, this car is more CBeebies than SAS in its take on hostile streetlife. The tall sides, faux-4x4 undertrays and big bumpers all suggest something originally intended to be an SUV but whose designer thought better of it at the last minute. This though, is what the market wants. Every mainstream manufacturer today either offers a supermini-based Crossover car of this sort. Indeed, Ford could still have entered this segment earlier if it had brought us the first generation version of this car that was designed and engineered solely for the South American market. Wisely perhaps, the Blue Oval chose not to. Just as with its larger Kuga Crossover model, the approach instead was wait, watch the opposition then try and come up with something better. Whether this EcoSport represented just that was debateable. It was updated with suppler suspension and various interior embellishments in 2015 and 2016 and a 140PS version of the 1.0-litre EcoBoost petrol engine arrived in the range in 2015. Ford fundamentally facelifted the car in early 2018. It's the re-facelift versions though, that we're looking at here as a potential used buy.

What You Getword count: 915

The EcoSport is a real global effort, designed in Brazil, with the version launched in 2013 built in India. It leans heavily on Ford's so-called Kinetic2 design language, with its large trapezoidal grille, smeared back headlights, short overhangs and an interesting blend of sharp angles and more organic curves that try to soften a front end sheerer than the North Face of the Eiger. Joao Ramos' design team were clearly aiming for a bit of SUV attitude, but some may feel the finished result sails a little close to cuteness, with a look described by one writer as being akin to a Chihuahua in a studded collar. The Blue Oval brand will probably argue this to be exactly what many potential buyers would want - and we wouldn't disagree. The sharp-looking headlights feature LED running strips, there are indicators integrated into the door mirrors and there's a decent amount of shape and style in the flanks. As with most designs of this kind, it's very sensitive to colour and trim choice, so if you're a potential buyer, we'd spend a bit of time on selecting the right shade and considering wheel rim sizes. Talking of wheels brings us to the issue of the rear-mounted spare that you had to have when this car was originally launched. In 2015, Ford made this feature optional. If your EcoSport does feature this embellishment, you'll get a crossover harking back to the SUV-look of the Nineties, which apparently is still very much in vogue in this car's home Brazilian market, where quick and easy access to the spare wheel is essential for safety reasons. That's all well and good but this is supposed to be a 'global' Ford design and the company should have known from the start that outside of the tropics, buyers generally don't take to this feature. This isn't necessarily because they don't like the rugged look. Or because they don't want the kind of proper full-sized spare wheel that's such a rare feature in most of today's modern cars. No, buyers don't like it because a huge spare wheel on the back means you can't fit a conventional top-hinged tailgate and the side-opening rear door you must have instead creates all kinds of awkwardness when you're trying to access the boot when backed into a tight parking space. Even if your EcoSport of choice doesn't feature a tailgate-mounted spare wheel, there's still the issue that the side-opening door is hinged on the left side. That means it opens away from the pavement, so when you get your stuff out, you can't put it straight onto the safety of the sidewalk. Instead, you've to put it onto the ground, then move it out of the path of the door before it can be shut. This wouldn't be such an issue if the kind of opening rear door glass section you get on many modern estates and SUVs was present here for getting smaller items in and out. But unfortunately, this feature was never made available. All that said, you soon learn to live with the side-opening tailgate - maybe even to like it. Toyota LandCruiser owners seem to. As for boot space, well the 346-litre capacity isn't one of the largest in the segment. Still, it is over 40% more than the pathetic total you'd get in a rival Nissan Juke. If you want more space and can flatten the 60:40 split-folding rear bench, then up to 1,238-litres is available. Transport of bulkier stuff will be aided by the way that the smart standard-fit aluminium roof rails enable bikes and roofboxes to go up top quite easily. On to rear seat space. Getting in isn't especially easy as the door aperture is quite narrow, but once inside, you'll find the back of an EcoSport a surprisingly pleasant place to be thanks not only to the high, airy roofline but also to the fact that the rear seats are set slightly above those in the front for a better view out. Of course, as with all cars in this class, there'll be the issue of restricted width if, rather optimistically, you're trying to cram three full-sized adults in the back, but a trio of kids will be fine. And up front? Well, the Fiesta DNA that's lacking in the exterior looks is certainly well in evidence here, most notably with the mobile phone-style array of buttons on the centre console. It's a button-fest that can seem rather overly complex at first, but one you quickly adjust to. The six-way adjustable driver's seat offers a supportively commanding perch and the instruments are clear and concise. As for build quality, well you could easily guess that one of these is screwed together in an Indian factory from the hard, utilitarian plastics used around much of the dash. Still, it all feels solid and Ford's European division has done its best to plush things up with this smart gearstick and leather-trimmed multi-function steering wheel. It's a practical cabin too. The odd coat hook would have been nice but in terms of stowage space, owners are undeniably well provided for with no fewer than twenty different cubbies and compartments for 'phones, sunglasses, coins, cups, drinks and chocolate bars. You get properly sized doorbins able to swallow a 1.5-litre bottle of water, a decently sized cooled glovebox that can hold six 330ml cans, large seatback pockets and a drawer under the front passenger seat to keep valuable items away from prying eyes. 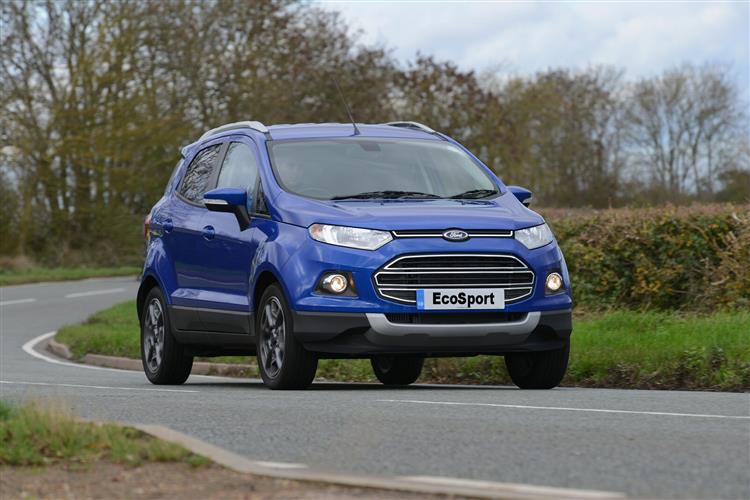