CAN THE EIGHT BE GREAT? (some text hidden)

The A8 is Audi's largest luxury saloon and the D4 series model which launched in 2010 was the brand's interpretation of full-Luxury motoring for the 21st century's second decade. In 2013, this design was substantially revised and it's this enhanced third generation D4 model that we're going to be examining here as a potential used car buy, it being smarter, more efficient and full of technology. Better established badges in this sector may be tempting but they can't offer many of the almost unique things this car brings to this segment: 4WD, V8 diesel power, Cylinder-on-Demand efficiency and cleverer Matrix LED headlamps are just a few examples. Potentially, there's enough here to please the most demanding boardroom buyer.

It's hard to remember now, but prior to the A8 saloon's original launch back in 1994, Audi wasn't really considered a fully-fledged prestigious brand. Its cars generally languished in the corner of your local Volkswagen dealer's showroom and appealed to those who couldn't quite stretch to the products of the smarter German makers. The first generation A8 changed all of that, a car the like of which the luxury segment had never seen before. Aluminium spaceframe technology from NASA. 4WD quattro technology from the World Rally Championship. And exquisite standards of build quality that redefined what boardroom buyers could expect from a European luxury car. At a stroke, it put posh rivals on the back foot - and Audi has never looked back since. With the standard set, Ingolstadt turned its attention to smaller more profitable models: the A8, it seemed, had had its turn in the limelight. We got a second generation version in 2003 and a MK3 model in 2010, both promising (and delivering) a further refinement of the original recipe - but it wasn't quite enough. Jaguar's XJ was still seen as more dynamic: Mercedes' S-Class as more luxurious. And BMW's 7 Series as a compromise between the two. The world largely forgot the A8's still unique set of attributes, its aluminium spaceframe and quattro cleverness. It wasn't, we were told by those who were supposed to know about these things, a car you could really fall in love with. It wasn't a car that would say enough of the right things about you. But it might be in this form. An improved version of the MK3 'D4'-series model was launched in late 2013, offering styling that delivered a slightly more overt statement of quality. And Euro6 engines that were both more powerful and efficient. But as ever, it was the technology that sold this car. It wasn't only the provision of quattro 4WD that marked this car out from its rivals. It was also things like Cylinder-on-Demand technology and hi-tech Matrix LED headlights that set fresh standards. This improved 'D4' design sold until late 2017, when it was replaced by a completely new fourth generation model. 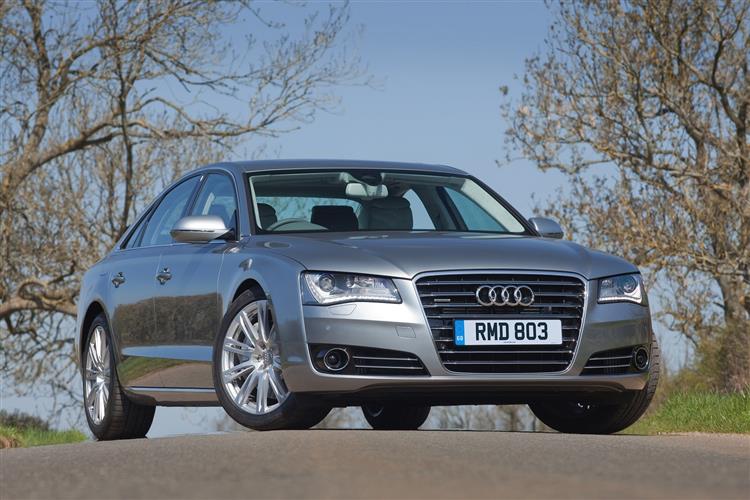