The Mercedes S-Class is the luxury saloon by which all others are measured. In its sixth generation 'W222'-series guise, this car was designed to be more affordable to run and even cleverer to use, but its real strengths remained in comfort and refinement. Under the bonnet, from launch in 2013, buyers got the widest and most technologically advanced choice of engines in the luxury segment, with three kinds of Hybrid powerplant to complement the usual petrol and diesel options. All-LED lighting technology and a futuristic suspension option completed a ground-breaking package. Here, we're going to look at original pre-facelifed 2013 to 2017-era saloon versions of this MK6 model.

The Mercedes S-Class. It's traditionally been the sensible answer to the question every motoring writer likes to dodge - 'what's the best car in the world?'. Other vehicles can be more opulent, faster or better to drive but over the years, no other model has so consistently delivered such a technologically-advanced blend of automotive virtues. The S or 'Sonderklasse' has served as the flagship Mercedes saloon for over fifty years in various guises and the 'W222' model we're looking at here was the sixth generation since Mercedes started officially using the S-Class tag back in 1972. This car though, had a tougher brief than any of its predecessors. At its entry point, it needed to satisfy successful mid-level Managers, while at the other end of the line-up, the same car with greater power and opulence had also be good enough to meet the exalted expectations of Rolls Royce and Bentley buyers. To achieve that, this car needed to be ground-breaking - but then the S-Class always has been. This, after all, was the luxury saloon that in 1978 pioneered anti-lock brakes, in 1981 introduced airbags, seatbelt pre-tensioners and traction control and by 1992 was the first car to be built entirely free from harmful CFCs. And we could go on to talk about things like double glazing, Electronic Stability Control and Keyless entry - you get the point. Models like this Mercedes are state-of-the-art test beds for the best that their engineers can produce. Some features will forever be limited to plutocratic purses but many others will eventually filter down into the everyday mainstream. Which means that perhaps it won't be long before the more affordable vehicles most of us own completely dispense with light bulbs. Or feature anticipatory suspension systems using a camera to detect and respond to irregularities in the road ahead. These features, along with industry-leading hybrid engine technology, were amongst the many things that aimed to set this 'W222'-series S-Class apart from its luxury sector rivals. The original version of this MK6 model sold until the Autumn of 2017, when it was replaced but a substantially updated version of the sixth generation design. Coupe and Cabriolet versions of this S-Class were announced in 2014, but here our focus is on long and short wheelbase versions of the saloon bodystyle.

What You Getword count: 969

People all around the world can recognise an S-Class right away, its elegant design ever an expression of luxury and the automotive grandeur of its era. With this car, Mercedes has always sought to combine progressive design with the classic elegance that extends all the way back to its roots in the 1930s. It's a heritage more evident than ever in this sixth generation model with its classic architecture and flowing silhouette, a look that may be a touch more discreet than before but is also a little more sophisticated with its long bonnet, flowing, domed roofline and gently slanting rear end. At the front, the grille is bigger than that of the previous model, the air intakes more prominent, while the styling around the advanced LED headlights and the way that the airflow is managed is just a whole lot more detailed. It's all indicative of the optimally co-ordinated care that's gone into all the things you can't see, like a sleek, wind-cheating and much stiffer bodyshell, half of which is fashioned from lightweight aluminium. Moving back, you'll appreciate the taller and more dignified glasshouse, emphasising a profile that's a little more saloon and a little less coupe-like because the brand had with this generation design, a separate S-Class Coupe variant. With the long wheelbase bodystyle that most customers choose, you don't get the slightly odd elongated look that characterises lwb versions of this car's competitors. That's because, unlike those rivals, it was originally designed around the longer bodyshape, rather than styled in shorter form, then stretched. The difference shows. So you're free to simply admire the classic elegance centred in profile around the centre character line - what Mercedes rather awkwardly calls a 'Dropping Line' - that descends discreetly from the front to a rear section where a pronounced shoulder above the back wheel gives the rear end of the car a power-packed look. Talking of wheels, 18-inch rims are standard but to us look rather under-sized for the sheer enormity of this car. We'd want a car whose original owner specified 19-inch alloys instead. The rear screen cuts into the C-pillars and the tail lights are completely encased by the car body. Like the headlamps, these are all-LED affairs, back in 2013 this car being the first in the world to do without a single light bulb inside and out. 35 LEDs light up these tail lamps, 56 of them are used in the headlamps and around 300 are scattered around the cabin. 21st century lighting indeed. Drop inside and owners of the previous generation version will notice the more spacious feel, with significant amounts of extra head, elbow and shoulder room in a less cluttered cabin that's a long way removed from the button-fest that many Mercedes owners are accustomed to. Smooth curves and horizontal elements give a feeling of width, solidity and elegance without compromising on ergonomics, although we have to wonder whether BMW has better rationalised the mix of buttons and on-screen menus. Ah yes, the screens. They certainly dominate this cabin, two 12.3-inch high-resolution TFT displays that one more dismissive colleague described as looking like a couple of iPads shunted together. We actually think they look rather sleek, with wondrous graphics that make those on rival infotainment systems look very old-fashioned. The screen directly ahead of the driver performs all the functions you'd expect from a conventional instrument cluster. Most of the other information you'll need is to be found on the centre-dash screen that delivers the bewildering functionality promised by Mercedes' COMAND infotainment system. To be fair, this isn't bad in its user-friendliness but there's a heck of a lot of depth to it that some buyers just won't take the time to learn. You can't argue with the interior quality. Metallised switch surfaces with pearl-effect paint finishes in three colour shades, ornate speaker grilles, grooved organ-stop controls for the distinctive metal 'eyeball' air vents and superb attention to detail characterise a cabin trimmed in lustrous buttery leather with seats that even feature heated armrests. We're not sure about the two-spoke nappa leather-trimmed steering wheel with its old fashioned Mercedes-Benz badge script, but the analogue dashboard clock is lovely and at night, you'll enjoy ambient lighting with a choice of seven different colour settings. Rear seat passengers are even better provided for, as is appropriate in a car that many owners will want chauffeur-driven. They've 14mm more knee room and 9mm more shoulder room than they would have had in the old MK5 model and of course, in the kind of long wheelbase guise most models feature, there's plenty of room to stretch out and relax. Many models you'll come across will feature the 'Executive Rear' package that gives you an electrically operated, ventilated seat with powered side and rear window blinds for extra privacy and a backrest adjustable by up to 43.5-degrees. Some cars will also have been specified with the 'Rear Seat Comfort' package that gives you a seat massage function and seatback-mounted entertainment screens. They've to be operated by a fiddly remote control though, which seems rather out of date in these days of touch screen technology. Perhaps it's because of all this rear seat trickery - no fewer than five rear seat option packages were originally made available to lwb customers - that the kind of folding rear backrest you'd normally get in a luxury saloon to extend the bootspace can't be offered here. So you're reliant on a 510-litre trunk that's a touch bigger than a BMW 7 Series and a touch smaller than an Audi A8 or a Jaguar XJ. It'll be quite big enough to transport the golf clubs and associated paraphernalia that most executives will cart about - and, laudably, isn't compromised in size by the batteries that Hybrid variants must carry about. 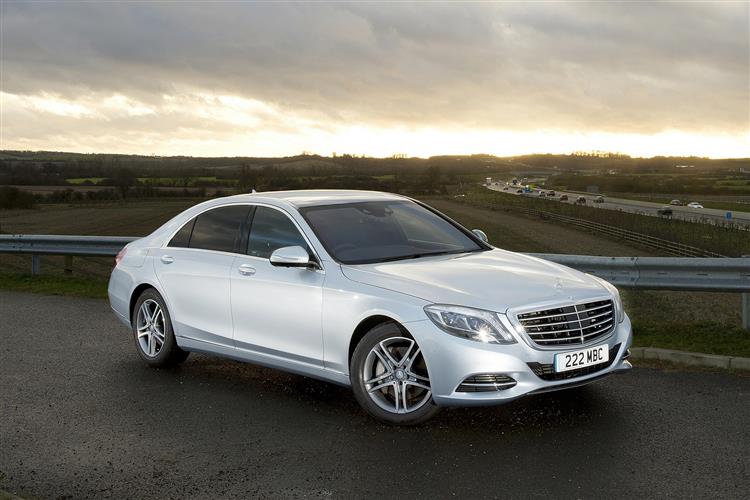