Want to know just how much fun it's possible to have in a ferociously fast small supermini? Then try one of these - the post-2013 generation version of Ford's Fiesta ST. It's been developed like a proper performance car - and drives like one, ready to paint a smile upon your face corner after corner. Of course, for not much more than the affordable prices being asked here, you can possibly buy more power. But after a drive in one of these, you probably won't want to.

Before 2013, it was true to say that we'd never really had a truly great sporting Ford Fiesta. The Blue Oval brand had tried of course, building up a hot hatch legacy around this model that went all the way back to the XR2 of 1981, with a history subsequently embellished by the more powerful RS1800 and RS Turbo models that followed it. All though, were eclipsed by French hot hatch rivals, first a series of small Peugeot GTis, then in more recent years, the Renaultsport Clio. The post-2013 generation Fiesta ST we're looking at here was tasked with changing all that. It once again had to take on ever more sophisticated versions of those same two rivals, along with a whole host of other similarly powered shopping rockets offering anything between 170 and 200bhp. In short, it had to be good. It was. Which was predictable in some ways. For one thing, it was based on the best-handling supermini of its kind - which certainly helped. For another, Ford had an awful long time to get it right. The sixth generation Fiesta this particular ST is based on dates all the way back to 2008, but it was the Spring of 2013 before this, the first of the properly quick versions, hit the market. Unlike its rivals, the Blue Oval has not one but two performance badges up its sleeve when it comes to cars of this sort, 'ST' (or 'Sports Technologies') being company-speak for 'quick but not concussive', a performance level that sits just above fast-but-family-friendly 'Zetec-S' models but just below track-spec RS derivatives. A badge, in other words, promising mild madras rather than vindaloo and one applied to the kind of car a red-blooded racer could enjoy but still use every day. Designed by enthusiasts to be driven by enthusiasts, this fast Fiesta's proved to be poised, priced to sell and, with 182PS on tap, plenty quick enough. It provided to be the best car of its kind that Ford had ever brought us. An ST200 version was launched in the Autumn of 2016. And both ST and ST200 variants sold until mid 2017, after which they made way for an ST version of the replacement seventh generation Fiesta.

What You Getword count: 480

It's easy to go overboard and get all Max Power when it comes to a car of this kind, a temptation Ford thankfully resisted here. This isn't the prettiest junior shopping rocket you can buy but it is playfully purposeful in demeanour, the business end dominated by a black honeycomb mesh version of the facelifted sixth generation Fiesta's distinctive Aston Martin-like trapezoidal front grille. It sits below a sculpted bonnet and just above a deep chin spoiler, both of which set the tone for a sporty three-door-only silhouette that's clothed in a unique ST bodykit. Design that's especially purposeful at the rear with its roof-top spoiler and lower diffuser through which peep a pair of chromed dual exhaust pipes. Things aren't quite so overt once you take a seat inside. Go for a base-trimmed version and you don't even get the two things that most set the cabin apart - the (rather hidden) steering column starter button and the lovely, grippy Recaro seats you get on the plusher ST2 model. Other ST-specific features are a little more subtle: there's alloy trim for the gearlever and pedals and ST badges on the steering wheel and front door scuff plates. Oh and the traction control function - which in lesser Fiestas would be hidden in one of the infotainment system's sub-menus - is given its own prominent position on the centre console. Otherwise of course, apart from a different colour scheme for the heavily-cowled instruments, it's all normal Fiesta-fare - which means that it all works fine but doesn't feel of super-high quality. If you've an issue with that, then bear in mind the affordable pricing. Generally, we find that we're happy with it all the way it is, though the multimedia screen that dominates the dashtop could be a bit larger. There are no complaints about the shiny Sony-branded stereo you get on plusher models though. Plus it's nice to get a properly round (rather than flat-bottomed) steering wheel in this class of car for a change - and the leather-trimmed three-spoker feels great to hold. And rear seat space? Well, it's better than the claustrophobically rising beltline of this three-door-only design might lead you to expect. True, the heavily bolstered Recaros do slightly hinder your access into the back, but once you're there, the Fiesta surprises with headroom manageable even for a six-footer - though his or her legs will be crushed pretty snugly against the seat in front. Luggage room meanwhile, is much more class-competitive than that of the larger Focus model, though the 276-litre total is a fraction down on rival Peugeot 208 GTi and Renaultsport Clio models. If that's not enough, you can of course push forward the rear bench and although, because the backrest simply flops onto the seat squab, that doesn't give you a completely flat floor, it does free up 960-litres of fresh air. 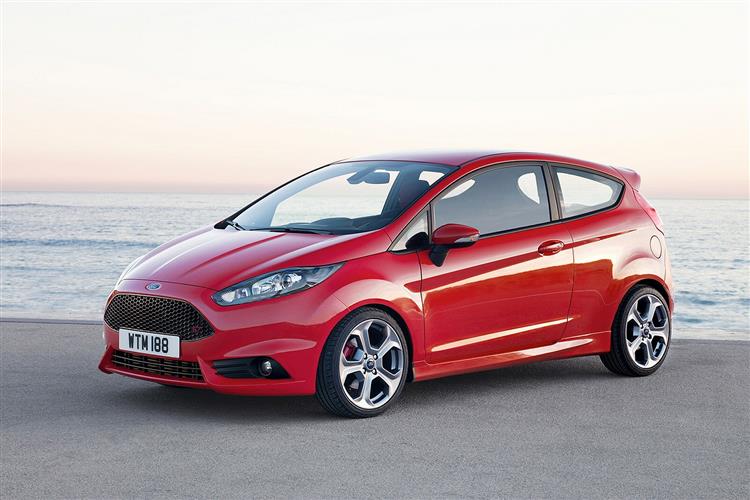