Think of a used premium-badged mid-sized SUV and you'll probably think of something German - or maybe a Range Rover Evoque. We'd also suggest though, that you should be looking at the car we're going to focus on here, the improved first generation version of Volvo's XC60. If you're shopping on the used market and looking at this car, it's worth stretching to one of these post-204 facelifted models as they were usefully improved and got the option of a much more sophisticated 'Drive-E' D4 diesel engine.

The Volvo XC60 was first launched back in 2008 as the Swedish brand's alternative to premium SUVs like Audi's Q5 and BMW's X3. To begin with, most models used old-tech Ford-derived 2.4-litre diesel engines but in 2014, to coincide with mid-range facelift, the car was granted Volvo's own 2.0-litre 'Drive-E' D4 unit - though you could only have it mated to 2WD. This derivative instantly became the one to have in the range between this point and the end of first generation XC60 production in 2017.

What You Getword count: 569

This improved MK1 model XC60's exterior styling disguised its bulk more effectively. Imagine a larger first generation XC90 model that's been on a hot wash cycle for a couple of hours and that's what the facelifted XC60 resembles; shrunken slightly, a little chamfered in its edging but recognisably a Volvo product and one that the company claim has turned up the visual volume. Changes to the front end of this improved design included a re-sculpted bonnet, sleeker headlamps and horizontal lines on the grille which, along with a bigger Volvo badge, featured chrome bars to emphasise the car's width. The Swedish brand's aim with the improvement package was apparently to create a more upmarket, cohesive look. A lot of that came down to detail tweaks. Like the emphasis away from black trim and on to colour co-ordination; the relocation of the washer nozzles out of sight under the bonnet; the flush headlamp washer jets; and, at the rear, a more smartly integrated set of tailpipes to set off a neatly finished piece of design that still wears it age well. Under the skin, the whole thing was based on an originally Ford-derived chassis. The so-called 'EUCD' platform for this Volvo's design dates back to the period when this Swedish brand was under Blue Oval ownership. From the same apparently humble underpinnings have sprung some great cars, this XC60 taking its place alongside products as diverse as the Land Rover Freelander, Ford's Galaxy, Mondeo and S-MAX and Volvo's own V70. At the wheel, the changes made to this revised XC60 model were subtle but the overall ambience was certainly a stage or two up-market from what was provided in the original version of this car. This came courtesy of better quality wood inlays, a plusher headlining, smart textile-covered B-pillars and some very well finished silk metal frames around the air vents and light controls. As a driver, through the chunky four-spoke wheel you view clear, smartly finished instruments and there's the usual infotainment screen in the centre of the dash, though it is a little small unless you have a car whose original owner upgraded to the optional satellite navigation set-up. The rear seats are situated a little higher than the front pair to give better visibility for children and the two outer seats in the back could be specified with two-stage booster cushions. There's certainly a very airy feeling in this part of the car, particularly if you've got an XC60 fitted with the optional laminated glass panorama roof. Unlike other similar roofs on other cars, it doesn't rob you of too much headroom and a couple of six footers would be comfortable in the back over a long trip. You'd struggle to fit three of them in though, but a trio of kids will be quite happy. Out back, the tailgate opening is arguably the widest amongst the XC60's direct competition, with a 495-litre capacity that's only slightly less than a BMW X3 or an Audi Q5 from this era. Under the boot floor, there's a secure storage area that can't be opened without the tailgate being lifted, making it a great place to keep valuable items safe when the car's parked. As with big Volvo estates, the rear seat is a three-piece affair that folds 40-20-40, with each section capable of folding down completely flat. Push everything forward and there's 1,455-litres of total fresh air on offer. 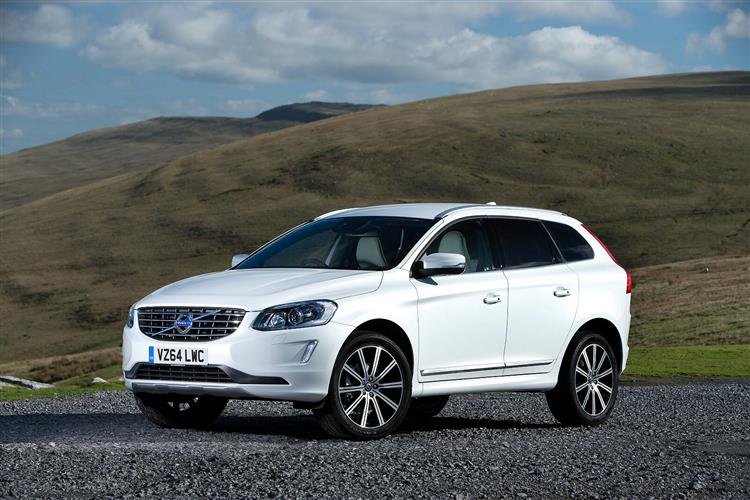