CALL ME A CAB (some text hidden)

In the early years of the 21st century, Volkswagen offered the affordable convertible segment a folding metal topped roof configuration with its Eos model but by 2013, the brand had decided to switch back to fabric hoods and did so by effectively replacing the Eos with this sixth generation Golf Cabriolet. Does it make sense as a used buy? Let's find out.

Volkswagen's Golf Cabriolet. How do you see it? Historically, the first four-seater convertible of the modern era? Affordable fashion statement in Thatcher's Britain? Last of the sensibly priced soft tops before metal folding roof coupe cabrios took over? An open-topped Golf has been all of these things - and aimed to be more in the sixth generation guise launched in 2013. Back then, this was the car many thought they'd never see. Before this model after all, you had to go back as far as 1993 to find the last time we'd seen a completely new Golf Cabriolet. At the turn of the century, it seemed as if Volkswagen had lost interest in soft-topped versions of its best-selling family hatchback. Fresh air fiends were instead served by a Beetle Cabriolet launched in 2003 and the folding metal roofed Eos which arrived in 2006. Neither of which sold in the numbers the Wolfsburg brand had become used to seeing in the Golf Cabrio years. Nearly 700,000 soft-top Golfs had rolled off the Osnabruck assembly lines before production finished in 2002. So in 2013, it made a return based on an old Golf MK6 platform, initially to sell alongside the Eos and provide the fabric-topped alternative to that car that many buyers by then seemed to want. Not having to build in all the folding metal panels needed for that Eos Coupe Cabrio model meant that the Volkswagen design team could deliver sharper styling, while the resulting reduction in weight led to sharper handling. And a return to prominence of an Eighties icon. In 2014, a rare high performance Golf R variant was introduced. The Golf Cabriolet range sold steadily until it was quietly phased out at the end of 2016.

What You Getword count: 777

So, what we have here is an ordinary Golf MKVI hatchback with an open top - or do we? You're never quite sure with Volkswagen. After all, the last so-called 'fourth generation' Golf Cabrio was in fact based on a MK3 hatch model but had a MK4 hatch model front grille tacked on. We didn't get a fifth generation Golf Cabriolet - unless of course you count the Eos - and this sixth generation car was an interesting mix that under the skin saw it fabricated using a Golf front end, an Eos middle and Audi A3 Cabrio rear. Without the Audi, this car probably wouldn't have existed at all. Not only did the Ingolstadt car offer this Golf many of its oily bits but it can also be credited with proving a ready market for fabric-topped convertibles of this kind at a time when many thought the folding metal roof the only way forward. That's the back story. What's important though, is that this design looks just right, completely different from its hatchback stablemate from the heavily raked windscreen backwards. The aesthetics are helped in no small measure by this being the first Golf Cabrio to do away with an ugly roof bar arching 'strawberry punnet handle'-style over the middle of the car. There's no need for that in these days of automatically activating roll-over devices that can spring from behind the rear headrests in the blink of an eye, leaving this car free to boast a deck as clean as that of a Riviera speed boat. In size, it's a fraction longer than a Golf hatch, but 20cm shorter than an Eos thanks to the more compact rear end that rather cleverly incorporates the fabric roof - and we say that because of the way that it folds. Activate the process and the upper side of the hood's leading edge (that's the segment that directly mates to the windscreen frame) covers the entire top surface of the roof storage box, eliminating the need for a fiddly tonneau cover. This in turn means that the roof can swing open in only 9.5 seconds (it takes a couple of seconds longer to close) and can operate either way at speeds of up to 18mph. And luggage space? Well like us, you might well be approaching this car thinking that use of a fabric hood rather than a metal folding top would mean a larger boot - but it isn't that simple. With the roof down, you get 250-litres of luggage capacity (10-litres shy of a MK1 Audi A3 Cabrio) which when you're driving al fresco is a useful improvement over metal folding top rivals from this era, say a Renault Megane CC with 211-litres or Volkswagen's own Eos with 205-litres. The problem is that when you put up the roof, the space on offer in the boot doesn't improve. Hard-top convertible rivals in contrast, whose boots of course must be huge to store all their complicated origami-folding panelling, do much better with the top in place, something like an Eos offering 380-litres of space in this form. To be fair, this Golf could still match that if you weren't using its 50:50 split-folding rear seats and were able to push them forward. Essentially then, it's a pretty practical proposition. If you do want to use the rear seats for people, the potential space on offer looks unpromising, given the pert rear of this car. And sure enough, you have to be pretty agile to get at them with the roof up, despite the easy-entry function that sees the front seats slide forward as you fold them. Once you're installed in the back though, it's actually reasonably spacious, with decent adult head and legroom that'll be fine for short to medium-length journeys and ideal for children. The only issue is really elbow room, given that the sides of the cabin curve inwards to accommodate the roof mechanism. There's plenty of elbow room in the front though - indeed plenty of room all round in a driving position that you can quickly tailor to your needs with a height-adjustable seat and a reach and rake-adjustable wheel. The dash and controls are lifted straight from the Golf hatch, so there's plenty of quality of display with careful use of soft-touch plastics and nicely judged splashes of chrome. There are some nice touches too: the button in the centre of the roof release control that at a touch can operate all four electric windows. And the way that when you raise the roof with the heater blower on full, the fan automatically calms itself when the roof clicks into place. Neat. 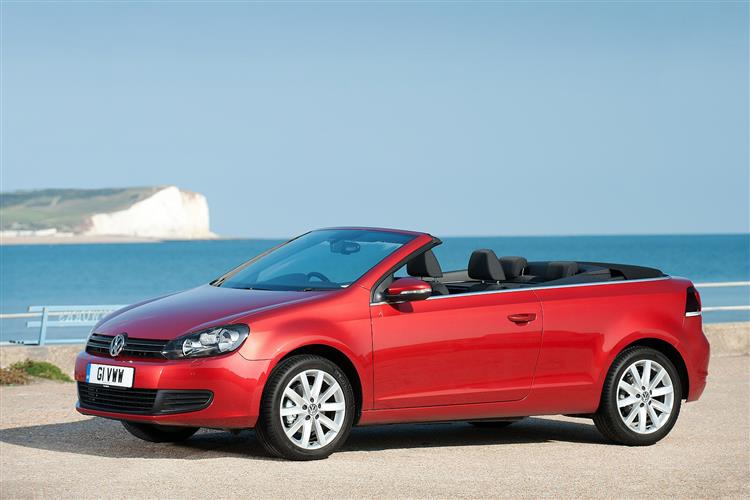