Volkswagen's Crafter, the UK's fourth best selling large van, is the thinking business person's choice in this sector. It was developed as part of a joint venture that also produced the Mercedes Sprinter van, and was launched back in 2006, then updated in 2011. It may not be the first LCV in this class you think of when considering a used model, but it's arguably the best quality choice you could make in this segment. This is a big van well placed to take in its stride whatever your company can throw at it.

A really large van is the kind of thing your business will need for its heaviest, most awkward loads. The kind of vehicle that, as a result, is likely to get the toughest day-to-day treatment. Such an LCV will also require quite a substantial initial outlay, money you'll want to preserve as far as possible in resale value when the time comes to sell. For all these reasons, when considering a van of this kind, it's tempting to stretch yourself a little and go with the quality option, even if it costs a little more. In the used van market, that tends to mean either a Mercedes Sprinter or this contender, the first generation version of Volkswagen's Crafter. Both are based upon the same underpinnings and when new, rolled down the same production lines at Daimler's Dusseldorf and Ludwigsfelde plants. A glance though, beneath the bonnet of these two models will reveal very different engines. The Volkswagen's were more economical which, along with a lower up-front asking price, explained its appeal in Britain's large van LCV sector. It's an appeal that was strengthened for Crafter buyers in 2011 with an improved model which ditched the original 2.5 TDI diesel engine, replacing it with a more frugal 2.0 TDI unit, binging efficiency figures into line with obvious rivals. This model sold until the introduction of an all-new second generation model Crafter, which Volkswagen developed on its own and launched in early 2017.

What You Getword count: 693

We'd recommend that if possible, you try and stretch to one of the post-2011 variants. As well as featuring a new 2.0 TDI engine, these models featured a slightly smarter front end intended to bring the design more into line with the stylistic look of company's smaller Transporter and Caddy van models. Of course, the emphasis is on practicality. Take, for example, the non-slip step you'll find on the central section of the bumper beneath the grille, useful when, for example, you want to step up and clean the windscreen. Along the side, tough rubbing strips that can be easily unclipped and replaced guard against minor knocks and scratches. And there are the usual impressively small panel gaps that emphasise the build quality advantage this Volkswagen enjoys over many of its rivals. Moving inside is easy, thanks to a low step and a large door opening. Once in the cab, as you'd expect, two or three people can comfortably travel side by side in the front. In the post-2011 model, if you're not using the middle seat, you can pull down its centre section and turn it into a table complete with two upholders and a pen-holder - ideal if you've paperwork to complete or if you're stopping somewhere to have a bite of lunch. The driver's seat is multi-adjustable and most original customers specified the steering wheel to be adjustable for reach and rake, so it's easy to get comfortable. And once you are, there's plenty of space for all your odds and ends, with storage spaces aplenty. You get a large bin in each of the doors big enough to store a large road atlas and a 1.5-litre drinks bottle. Then there are large shelves above the windscreen and more shelves (one of which is big enough for an A4-sized clipboard) on top of the fascia. There are no fewer than five cupholders for that morning trip to McDonalds and a handy dash-mounted clip to deal with stray paperwork. You also get a large glovebox that can be air-conditioned to keep drinks cool. And useful jacket hooks on the B-pillars. So, how practical will this Crafter prove to be in everyday use? The twin rear doors of the Panel van variant can be swung out in the usual way - to 90-degrees or onwards to 180-degrees if you release the stays. There's a reasonably low loading height which can be as little as 670mm and once you get your goods inside, the space available will of course depend upon your choice of wheelbase - short, medium, long or Maxi. And you'll also need to carefully select your roof height, the choice being between normal, high or super-high, equating to interior roof heights of 1.65m, 1.94m and 2.14m respectively. There are four load compartment lengths varying between 2,600mm and 4,700mm. Load volumes vary between 7.5 and 17 cubic metres. The load width is 1780mm, narrowing to 1350mm between the wheelboxes. Payload capacity will of course depend on your choice of Gross Vehicle Weight - 3.0, 3.5 or 5.0 tonnes, depending on whether you choose a CR30, CR35 or CR50 model. Across these three variants, payloads on the 2.0 TDI models vary between 1,044 and 2,693kgs. In other words, if you select your Crater carefully, pretty much everything you're going to want to carry will fit, the largest models able to swallow up to five euro pallets. A sliding side door is standard (a second was offered on the options list) and it's worth pointing out that the height and width aperture of this is big enough for those pallets to be loaded in at the side. To keep your cargo from moving about, there are two load lashing rings on the B-pillar and between six and twelve floor-mounted ones, depending upon the vehicle length. If you forget to use them and everything slides forward, then you'll be glad of the standard full height bulkhead separating the load area from the cab. Half-height plastic panels are provided on the doors to try and protect the cargo bay but there's really no substitute for a proper ply-lining kit to cover the whole area properly. 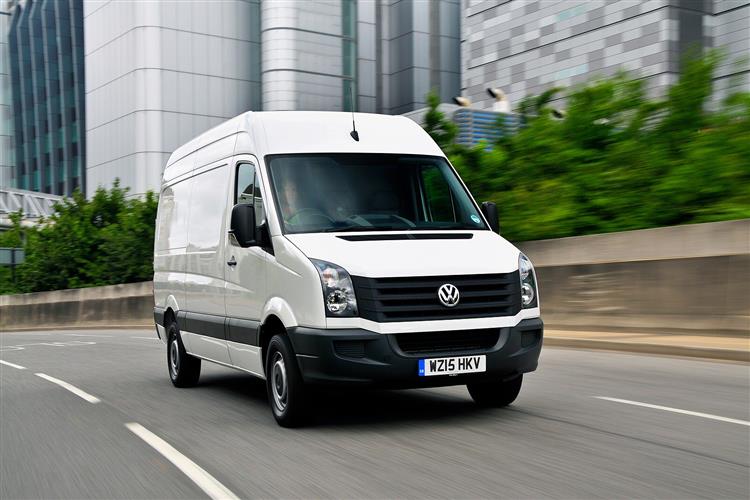