Think pick up and you'll probably reckon on a Toyota Hilux, or a Mitsubishi L200, possibly even a Nissan Navara, a Volkswagen Amarok or a Ford Ranger. If you're in the market for this sort of vehicle on he used market though, there's another name that would be wholly remiss to leave from your shortlist; the Isuzu D-Max. A more refined successor to the bulletproof Rodeo, the D-Max has carved itself a niche in this most hotly-contested sector. Throughout its production life, it was a vehicle that proved to be especially popular in its upper-spec doublecab guises. It was to capitalise on this demand that in 2014, the UK importers introduced the limited-run 'Blade' variant that proved so successful that they followed it up with the upgraded 'Blade 2' model that we're going to look at here as a potential used buy. Will it make a good used option for lifestyle pick-up buyers? Read on.

Following an original launch in 2012, Isuzu's D-Max pick-up carved itself a useful niche in the pick-up market, mainly thanks to the way its brand listened and responded to the needs of likely buyers. A number of owners told the marque that they'd like a really luxuriously equipped variant, hence the announcement of a special edition version, badged the 'Bade', in 2014. This derivative featured a whole host of extras included at an attractive asking price and was so popular that Isuzu further refined it to create the 'Blade 2' model that we're going to look at here as a used buy, a pick-up that delivers arguably the smartest cabin in the class, along with a few little extra touches to make ownership feel that little bit more special. This version sold until the Spring of 2017, when it was replaced by an updated model featuring a more efficient 1.9-litre diesel engine.

What You Getword count: 441

This upgraded D-Max Blade model certainly looks the part, offering those who want a leisure-oriented used pick-up something that's has some genuine visual impact. The eighteen-inch six-spoke alloy wheels help here, and they're shod with some meaty-looking 255/60-18 Pirelli Scorpion Zero tyres. The front grille is smarter than it was in the original Blade model, finished in a sleek dark grey tone that matches those wheels, while the door handles and roof bars are painted in black, as are the folding door mirrors. Even the heavy-duty side steps don't go too big in chrome. Two paint colour choices were offered to new model buyers. The 'Pearl White' finish looks clean, but the Blade definitely looks meanest in mica Cosmic black. For Isuzu, a priority in updating the Blade package was to introduce a classier feel to the cabin and you certainly get that with the upgraded Piano Black interior with its smart roof lining. The cab is still sturdy and practical though, if far from basic with its clever Pioneer stereo, branded mats and smart scuff plates. It also helps that the D-Max design is in many respects quite stylish in its own right, the circle of minor controls on the centre stack for example, reminiscent of a Mazda RX-8 sportscar, plus a couple of ventilation 'ears' at the top of the fascia that aren't a million miles away from contemporary Ford design. Ease of use was also thoroughly thought through, with wheel-mounted controls, big clear dials, easy access to the most important switches and a comfortable raised driving position. Move rearwards and there's even a decent amount of rear seat legroom, which isn't always the case with doublecabs like this one. You'll want to know about equipment. From a practicality perspective, there's an under-rail bed liner, heavy-duty side steps, a tailgate damper, a spare wheel cradle and black roof bars. From new, buyers were given the choice of two hard tops: a lockable colour-coded Aeroklas leisure canopy complete with internal light. Or a lockable black MountainTop Black Roller with black rear style bar. Inside, the Blade features a DAB digital radio inregrated into a Pioneer AVIC-F960 6.1-inch touchscreen navigation set-up, complete with integrated rear safety camera and a rear speaker system. Plus there's a premium black leather interior, heated front seats, branded floor mats and scuff plates. Bear in mind too that all of this buillt upon the already very complete specification of the D-Max 'Utah' model. So you also get desirable features like automatic climate control. Options that many new buyers went for include a bonnet protector, a loadbay bed rug, trendy lazer lights and a spare wheel bag. 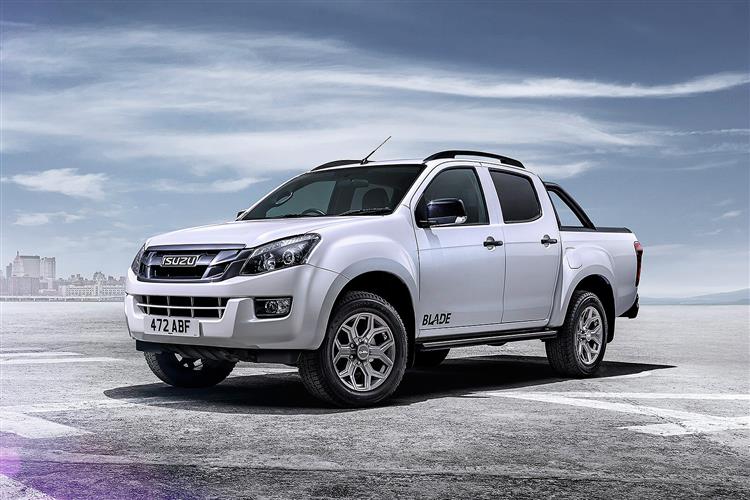