RUGGEDNESS TO THE MAX (some text hidden)

When Isuzu replaced its aging Rodeo pick-up with this much more modern D-Max model in 2012, it finally became a credible force to be reckoned with in the growing UK pick-up sector. The tough 2.5-litre turbo diesel beneath the bonnet can haul and tow hefty loads through the wildest terrain you're likely to come across and there are three bodystyles to suit a wide range of buyers. Smart, tough and very affordable, it's a potentially very sensible used market choice.

If you want a job done properly, you call in a specialist. And when the job in question is that of creating a reassuringly over-engineered pick-up, then for British buyers, the specialist in question is undoubtedly Isuzu. Japan's oldest vehicle manufacturer is the only brand on the UK market that for decades has dedicated itself to the very specific needs of pick-up people, with rugged, utilitarian TF and then Rodeo models that were light on lifestyle but tough to beat. Which was fine if all you wanted was a dependable workhorse to lug things around. But not so good for those in search of something that could be a little more car-like at the end of the day, something like this, the Isuzu D-Max pick-up that was introduced in 2012. 'Car-like' might be over-stating things a bit. To be truly 'car-like', this vehicle would need to compromise hefty underpinnings that remain perfectly suited to the working week. But within the confines of the kind of vehicle a pick-up of this kind can be, the post-2012 D-Max represented a huge dynamic step forward for its brand - as it needed to to match competitors of the calibre of Ford's Ranger, the Volkswagen Amarok, the Toyota Hilux and the Nissan Navara. Compared to its Rodeo predecessor, it was safer, more powerful, more spacious and much better looking, with lower running costs, extra equipment and more off-road capability. This D-Max sold until the Spring of 2017, when it was replaced by an updated model featuring a more efficient 1.9-litre diesel engine.

What You Getword count: 855

Styling hasn't been a priority for Isuzu pick-ups in the past that offered rugged, squerical shapes, big wheels, lots of chrome - and not a lot else. In a segment now increasingly reaching out to the lifestyle market, a bit more effort was required this time round, hence this post-2012 D-Max model's adoption of a more rakish, wedgier shape that was supposed to look 'tough, poised and ready for work'. This meant a larger front grille on a front end decorated with daytime running lights and flowing into an A-pillar that was moved forward by 100mm and set at a more acute angle leading to the lowered roofline. At the rear, you'll find a set of largest-in-class tail lamps, which feature LEDs on higher-specification models. Climb inside, easier than you might expect thanks to wide-opening doors, and you're greeted by an interior that's hard-wearing and cleanly styled. It's not easy to get the cabin right on a vehicle of this kind. If it's too plush, it'll be rejected by operators who are looking for a properly tough working vehicle. Too basic and you won't attract private buyers who'll be looking to drive the vehicle themselves. In this D-Max, there's a decent balance between these two extremes, starting with a chunky three-spoke steering wheel that feels good in your hands and features wheel-mounted controls on most versions. We're not quite so sure about the air conditioning and ventilation system of plusher variants, controlled by buttons in a rather unusual circular array which sits below the stereo. We found it a bit distracting at first because we had to takeour eyes off the road to make adjustments, but after a while it becomes second nature. We still think though, that we prefer the rather less stylish but ergonomically superior chunky dials of the lower trim models. At least the switchgear features buttons are broad and chunky so that you can easily operate them with freezing cold hands or when wearing thick gloves. Though the front doorbins could be bigger, otherwise storage space around the cabin is much improved on that of older Isuzus, with a lockable glovebox, a deep lidded box between the seat, a pop-up compartment on top of the dashboard, a shelf beneath the steering column and a sunglasses holder above the windscreen. Plus there are enough cupholders for an in-car Expresso gathering. You even get them in the back, a much more comfortable place to be than you might expect, thanks to the extra vehicle length and the longer wheelbase of this generation model that facilitate additional head, leg and shoulder room. Plus the seat back is less vertically inclined than it was on the previous Rodeo model, facilitating greater comfort on longer journeys. A trio of three-point belts and headrests are provided but in truth, three adults would be a little squashed in the back on longer journeys. One nice touch is the way that 60/40 split-folding rear seats enable you to more flexibly use the rear passenger space for packages, should you so wish. Additional storage compartments in the floor under the rear-seat base are also useful for keeping things out of harm's way. On to the loading practicalities, which we'll base around the double cab variant that most UK customers chose. At around 5.3m long, this is certainly a pretty large vehicle, so you won't be surprised to flip down the sturdy drop-down tailgate (which can only retract to horizontal level because of the chunky bumper) and find a pretty substantial cargo area on offer. You'll find a space 1485mm long, 1530mm wide and 465mm in depth easily big enough for a euro pallet which can slide in the 1110mm-wide space between the wheelarches. A load liner is standard on plusher versions and there are four tie-down points to stop loads from moving around, which is just as well as this vehicle doesn't offer a ladder rack behind the cab to protect the driver if all else fails and something really heavy slides forward. As for weight, well, you'll be able to cope with a payload of between 1,058 and 1,136kg, depending on the model you choose. The highest payload capacity can be found in the single cab model as it weighs less than the double cab variant. What else? Servicing is every 12,000 miles or 24 months. And insurance? Well it's group 9A or 10A, dependent on trims, for the double cab models. On the eco front, the CO2 emissions figure is a very respectable 194g/km and there's a dual Exhaust Gas Recirculation system to cut down on NOx Nitrogen Oxide emissions. As for day-to-day running costs, well you'd expect the world's largest manufacturer of diesel engines to be able to create a unit capable of keeping these reasonably in check. Sure enough, this very efficient common-rail Euro 5-compliant unit can return a class-leading 38.2 mpg on the combined fuel economy cycle. Isuzu reckons that the class-leadingly slippery 0.47Cd drag co-efficient helps that figure quite a bit, a shape they developed in the wind tunnel of the Japan Railway Research Institute, the place where the famous Bullet Train was born. 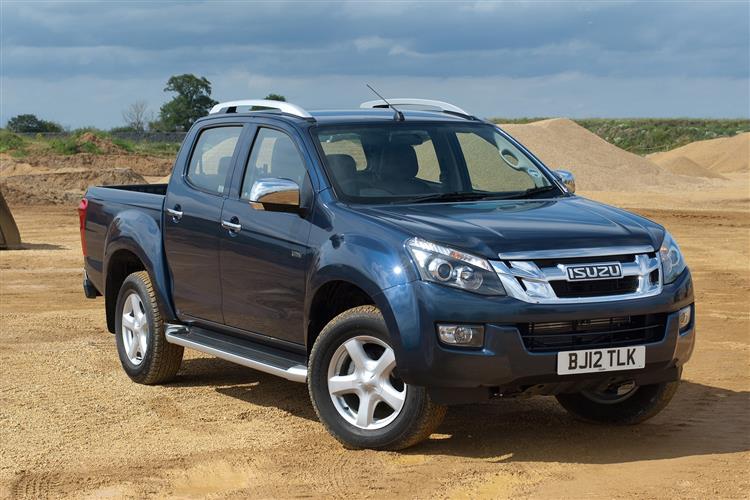