GETTING A BREAK IN THE CAYMANS (some text hidden)

Is the Porsche Cayman the best sports coupe reasonable money can buy? You'd have a pretty tough time arguing otherwise. For an insight into just how far ahead of its rivals this car really is, you need look no further than the fact that it's most regularly compared to its 911 stablemate, which costs nearly twice as much. In this second generation '981' series guise, the Cayman's classic mid-engined, rear-wheel-drive layout remained but was further developed with a re-designed chassis, a longer wheelbase, lower weight and a little more power than before. Add in sleeker looks that really offer up that 'want one' factor and you're looking at an obvious choice in the serious sports coupe segment from the 2012 to 2016 era, a supercar in all but price tag.

Though Porsche is best identified with the rear-engined 911 sportscar, the company actually has just as much heritage in mid-engined machinery. The very first car to bear the name 'Porsche' was, after all, a mid-engined sports car, the legendary 356 No1, and back in the 1930s, Ferdinand Porsche himself created the mid-engined Auto Union Grand Prix racers. It's slightly surprising then, to remember that when the Stuttgart marque first launched the original version of this Cayman model in 2005, it was the first mid-engined Porsche coupe they'd sold since the 914 of 1969. Of course, they'd been selling the mid-engined Boxster roadster for nearly a decade before that, the car that provided most of the basics behind this Cayman. Early on in this coupe model's history, Porsche always determinedly refuted suggestions that this car was simply 'a Boxster with a roof' but that's essentially what it boils down to. Not that there's much wrong with that, the exemplary handling balance of the brand's entry-level model enhanced by a body almost twice as stiff, which was always enough to make this car the darling of the red mist brigade in the motoring press, if not as strong a seller as its maker would have liked. Even after pokier engines and a high-tech PDK auto gearbox option were added in 2009, buyers still wondered why they ought to choose a curiously-proportioned Cayman coupe when a Boxster convertible was cheaper and prettier. In response, Porsche created this '981' series MK2 model, a car that was quicker, even sharper to drive, more efficient to run and higher tech to use. What most helped this post-2012 design though, was its new sense of style, influenced not a little by the brand's 918 Spyder hypercar. The driveway result is no longer a poor man's 911 but a very desirable sportscar in its own right. A model that makes similarly priced rivals look distinctly one-dimensional. In 2014, Porsche introduced an uprated 340bhp GTS variant. And in 2015, Porsche introduced an even higher performance 385bhp GT4 model. The second generation Cayman line-up lasted until 2016 when the normally aspired flat six engines of this '981' were replaced by the turbo flat four units used in the restyled '982' series car.

What You Getword count: 744

Does it look like a 911? The uninitiated might think so but visually at least, the '981' series Cayman is no longer a lesser, rather clumsy copy of that car. Your eye's immediately drawn to the bi-xenon headlights of the sleeker front end but the bigger changes are to be found further back with the higher haunches, the more prominent wheelarches and the swept-back roofline that together make this model a more distinctive thing than its predecessor. Reducing the rake of the rear screen and pulling its base further back has done wonders for the shape and it also helps that, unlike with the previous model, the indented doors weren't shared with the 911 and so better suit the completed design. The overall result is all muscularity and purpose. The whole idea with this car's second generation re-design was to put it on the same lightweight architecture that underpinned its Boxster and 911 stablemates - which is why, despite being a bigger thing than its predecessor, it actually weighs less thanks to extensive use of aluminium in the chassis, coupled with magnesium and steel where it's needed. A good example of the ceaseless development quest for efficiency can be found in the rear boot lid, emphasised by a distinctive blade spoiler that cuts across the rear light clusters. The lid is fashioned from aluminium and less than half the weight of the previous part. Lift it and you might be surprised to find how much space this car can offer behind a mid-mounted engine layout that's always been a big plus when it comes to practicality - though your service technician might not immediately agree. There's an expanded 275-litre space on offer here which, when combined with the further 150-litres you get under the bonnet in the front, provides a 425-litre total that's actually more than you get in a Volkswagen Golf. A two-seater Porsche sportscar that carries more gear than your average family hatch? The surprises keep on coming. There aren't too many of them when you get behind the wheel mind you, unless you count the fact that despite a lower roofline, there's actually more headroom than the previous version of this car could offer thanks to a lower mounting position for these surprisingly broad seats. The cabin's essentially the same as you'll find in a comparable '981' series Porsche Boxster - though that's no bad thing, with the same standard of fit and finish you'd find in a 911 costing twice as much. Unlike that car, you only get two seats. Those that see the 911's two cramped rear berths as irrelevant should swap from one car to the other for a week and see how often they throw a jacket or briefcase in the back or carry young children. Get yourself comfortable and, if you're familiar with previous Cayman models, you might notice that you sit a little further back from the controls, this contributing to a feeling of greater space in a re-designed cabin that really is more roomy thanks to a 60mm wheelbase increase. The usual bulky centre console arrangement was tidied in this design by fitting an electrically operated handbrake and also by moving the cup holders off to a slot by the glovebox. The dashboard, with its tapered centre console, proved to be a big improvement and if you've opted for a car fitted with the Sport Chrono package with its smart little timer, you'll find that dial neatly incorporated into the dash rather than being perched atop it like an afterthought (as was the case with the previous model). There are a few ergonomic issues: some of the buttons you use fairly often require you to take your eyes off the road to search for and operate. Likewise, the big central screen relegates the heater controls to a rather cramped position underneath, so they can be a little awkward to use. Overall though, we're talking here of an interior that feels impressively up-market. Peer through the chunky sports steering wheel and you'll find that, as with all the brand's models, a central oversized rev counter commands your attention, a silver finish marking out the 'S' model. To its left is a speedometer with spectacularly unhelpful 25mph increments. To its right is a VGA screen masquerading as a dial but actually displaying wither trip computer functions or a sat nav display if the car in question has been fitted with the expensive Porsche Communications Management system. 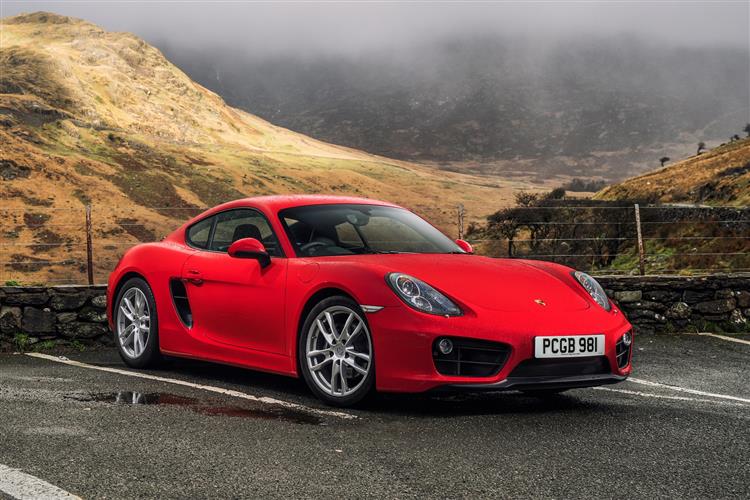