Named after the Carrera Panamerican road race, Porsche's Panamera is the brand's offering to Luxury segment buyers wanting spacious rear seat accommodation and a properly sporting Gran Turismo driving experience. This model could have ended up being a four-door version of the company's 911 coupe or a low-slung interpretation of the marque's Cayenne luxury SUV. In the event, it's very much its own car, a long, low five-door hatchback that offers something very different in its sector. In this improved post-2013 first generation guise, it was smarter, faster, more efficient and, in E-Hybrid form, impressively advanced too. For boardroom buyers who yearn for Brands Hatch, it's a tempting used car proposition.

Is there really such a thing as a four-seater sportscar? Porsche thinks so. This Panamera is the model that company founder Ferdinand Porsche always dreamed of making, something that would be more than simply another powerfully performing Luxury segment saloon. A machine instead created around the uncompromising sportscar principles that so characterise its brand - and a design that the Stuttgart brand tried to redefine in the improved post-2013 first generation model we're going to look at here as a potential used car buy. To understand the Panamera, you have to understand the way that Porsche sees it. This car may be priced against Mercedes S-Class-style Luxury saloons but its role in life is subtly different. The brand calls it a 'Gran Turismo', the kind of car that allows two rear seat passengers to recline in comfort while the driver enjoys himself. Forget Audi A8s and Jaguar XJs. Think instead Maserati Quattroporte or even Aston Martin Rapide. In other words, a four-door luxury conveyance to really get the pulses racing. This car won't be chauffeur-driven. Or at least it won't be here. Back in 2013, the addition of a long wheelbase bodystyle was one of the ways that Porsche improved this model's proposition for other markets but for ours, the importers always focused on efficient technology in the round of updates that created the subtly different improved MK1 model we look in this review. Byers got a cleaner, more effective 3.0-litre biturbo V6 for the mainstream petrol-powered Panamera S that such a large proportion of them chose. Plus an uprated 300bhp version of the strongest-selling diesel variant. And, perhaps most notably, there was the E-Hybrid variant, this legendary German maker's first plug-in petrol/electric hybrid and a car capable of both super-clean emissions and supercar performance. It all added up to a Porsche that on paper, seemed to boast a formidable array of talents. This model sold until the all-new second generation Panamera was launched in late 2016.

What You Getword count: 753

Shut your eyes, picture what a four-door Porsche 911 sports coupe might look like and you won't be a million miles away from the reality of this Panamera. It's an unusual look that won't be to everyone's taste, but the low, lean shape certainly does grow on you. The raised profile of the front wings is of course a brand trademark, but it can't in this case be matched by the kind of flat bonnet you'd get in one of the company's sportscars because here of course, the engine must be in the front, hence the power bulge. As ever, this model takes Luxury saloon segment conventionality and puts it through the paper shreader. Cars of this kind aren't supposed to be hatchbacks, nor are they supposed to only offer four seats. This one though, thinks differently, just as Porsche hopes its buyers will. These people will certainly be folk who liked the original version of this car, for this revised first generation model looks hardly any different - at least at first glance. Peer a little closer though and the differences become clearer. At the front, there are larger air intakes that are even bigger on the V8 models, as well as smarter bumpers and sleeker bi-xenon headlamps with LED daytime running lights. Move to the side and owners of the original MK1 design might note the more swept-back windscreen that extends the silhouette, the sharper profile lines and larger glass area. Asian markets got a long wheelbase bodyshape but Porsche never thought there'd be enough take-up for it here. As usual, colour-contrasting brake callipers give away the nature of the engine beating beneath the sculpted bonnet. At the rear, Porsche aimed for a lower stance and a wider look by widening the rear screen, increasing the size of the LED light clusters and lowering the number plate to a position just above the level of the model-specific tailpipes. As with the original model, the detailing is superb: take the way the wider rear spoiler opens upwards and outwards in two parts - a beautiful touch. And inside? Well if you think that the exterior changes made to his post-2013 model are difficult to spot, you'll find it even harder to notice any of the updates made to the driver-centric cockpit. Which mean that if you're used to the original version of this design, you'll be provided with more of the same - a Porsche sportscar that also happens to be a super-luxury saloon. Which means that, as before, the low-slung seating layout with its perfect positioning and almost infinite adjustability really is quite similar to a 911's, while the tall centre console that runs down the middle of the cabin hems you comfortably in, fighter aircraft cockpit-style. It extends right to the back of the car, firmly defining this car as a four-seater and enabling the designers to create purpose-built sports chairs at the back rather than an indented bench upon which at higher cornering speeds, occupants would be quickly rolling about. Back here, these aren't the compromised pews you'd expect to find in something professing to be a four-door sportscar, instead offering standards of head and legroom not really that far off Mercedes S-Class or a BMW 7 Series saloons. The seats are even positioned a little more centrally than those ahead, so you get a decent view of the action going on up-front. As for luggage space, well if, like us, you're tempted to approach this car expecting that its hatchback configuration will mean a bigger boot, you'll be disappointed. Click the keyfob button for the standard power-operated tailgate and you'll find that the most you can get is a 445-litre total common to normally aspirated and diesel models, which is about 15% less than you'd usually expect from a rival Luxury segment saloon. But then such a rival Luxury segment saloon wouldn't offer you the flexibility of being able to drop its rear seats and reveal up to 1,263-litres of total luggage capacity - which is what's on offer here. Bear in mind by the way that not all Panamera variants deliver the figures we've quoted. The luggage space figures for the petrol Turbo variants are, for some reason, a fraction down, reduced to 432 and 1,250-litre readings. As you might expect, the E-Hybrid version really suffers in practicality terms, given that its battery pack is housed beneath the boot floor. Here, you'll have only 335-litres to play with - or 1,153-litres if you flatten the rear seats. 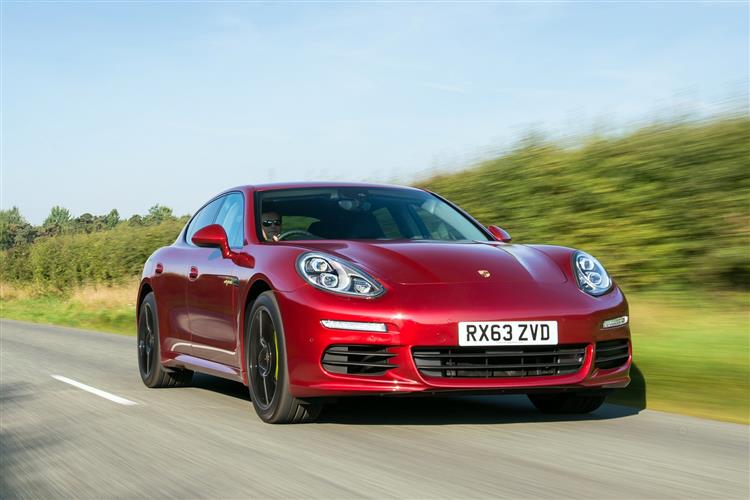