SOLID AS A 'ROK? (some text hidden)

Oriental models have for too long held sway in the UK pick-up truck market, a state of affairs that for some years now, Volkswagen has been looking to change. Having established itself as a purveyor of 4x4 passenger cars, the German brand sought to cross over into the off-road commercial vehicle market with the original version of its Amarok pick-up, a model we evaluate as a used buy here and one that was only offered in the UK in doublecab form. Big, economical and very capable, Volkswagen's off-road load-lugger aimed to give the Japanese contingent a few sleepless nights. But will it give you peace of mind as a secondhand purchase?

Pick-up sales may have taken off in Europe since the turn of the century, but the vehicles themselves have come almost exclusively from the Far East, Japan dominating the market with Mitsubishi's L200, Nissan's Navara and Toyota's Hilux, leaving Ford a few scraps to hoover up with their Thai-built Ranger model. So what kind of pick-up might a European brand design? How would it be different? In 2010 with this Volkswagen Amarok, we got our answer. The name apparently means 'wolf' in the Eskimo Inuit language but there was precious little sheep's clothing around this design, with styling and a tough ladder chassis intended to suggest this vehicle to be as tough as they come. Previous to the launch of the Amarok, Volkswagen's track record in offering pick-ups had been really limited to an embarrassing period in the Eighties when it tried to sell something called the Taro, little more than a rebadged Toyota Hilux. But in its van line-up, it does have experience in all-wheel drive that goes right back to the LT1 4x4 of 1983. And it's this experience that was put to good use with this Amarok, originally built at the company's Pacheco factory in Buenos Aires, Argentina for worldwide sale, before production was also moved to Germany too. From the start, this design proved to be a very European take on pick-up motoring. From the way that it drove to the feeling offered up behind the wheel, this was claimed to be the most car-like vehicle of this kind ever made. Potentially then, the perfect solution for SUV buyers who want the greater practicality of pick-up motoring. The original Amarok model was initially launched with the choice of either a 122PS single-turbo engine and a 163PS BiTDI unit, these powerplants later uprated to 140PS and 180PS. The model we look at here was massively updated in late 2016, when the styling was changed inside and out and a range of 3.0-litre V6 TDI units installed beneath the bonnet.

What You Getword count: 551

Pick-up drivers tend to be people wanting a degree of roadgoing presence, in which case they should find little cause for complaint with this Amarok. It's true that the styling is distinctively Volkswagen but there's little of the usual conservatism we've come to expect from the Wolfsburg company's design department. The chunky shape appears solidly planted to the ground with cleanly sculpted bonnet curves and a large Volkswagen emblem and grille, with clear horizontal lines linking them together across the front of the vehicle. For us though, the most memorable part of this vehicle is the experience you get when sitting inside. This is a pick-up for goodness sake. You're supposed to have brittle plastics and utilitarian design. Instead of which you've got neat switchgear, clearly defined instruments, a lovely three-spoke reach and rake-adjustable steering wheel and soft-touch plastics lifted straight from Volkswagen passenger cars. It's rather like being in a Golf on stilts and it'll be rather surreal if you come to this vehicle straight from an older pick-up rival. It's practical inside too, with lots of storage, including large bins in all the doors which can hold a 1.5-litre bottle in front and a 1.0-litre bottle in the rear. There's also a lidded bin, a lockable glovebox, a compartment for your sunglasses, two cupholders between the front seats and under-front-seat drawers on most models. The only ergonomically jarring touch is the ashtray holder projecting from the passenger side of the fascia which looks like an after-market add-on. In the rear, the extra width of the vehicle makes it easier to accommodate three adults if need be - though two will obviously be more comfortable. All will get proper three-point seatbelts and most trim levels include rear cupholders for their use. If the rear bench isn't in use and you need more storage room, you can tip the backrest forward to free up extra loadspace. On to the load bay. When you drop down the sturdy tailgate, the headline news is the 2.52m3 load volume - that's more than double the size of, say, an equivalent Toyota Hilux from this period. That might encourage you to use the hefty payload allowance - between 1064 and 1119kgs for Selectable 4MOTION models. These have a high rear axle load limit of 1,860kgs. With the Permanent 4MOTION variant, the payload drops to just 750kgs. If you are carrying heavy loads, you might find it a bit annoying that the presence of the large chrome bumper with its integrated step means that you can't drop the tailgate down completely. Still, the loading height is a reasonable 780mm from ground level. The Gross Vehicle Weight is 3170kg, though that falls to 2820kg if you get yourself a top-spec model with permanent all-wheel drive. Get your cargo into the loadbay and that extra cargo volume really pays dividends. You can for example, carry a Euro pallet sideways, not something possible in any rival pick-up. That's thanks to dimensions that give you a 1555mm loadspace length and a 1620mm loadspace width that narrows to 1222 between the wheelarches. There's 508mm of load area height. A light mounted on the back of the cab illuminates the loadbay at night, plus there's a 12v power jack and four tie-down points are there to stop your cargo from moving around. 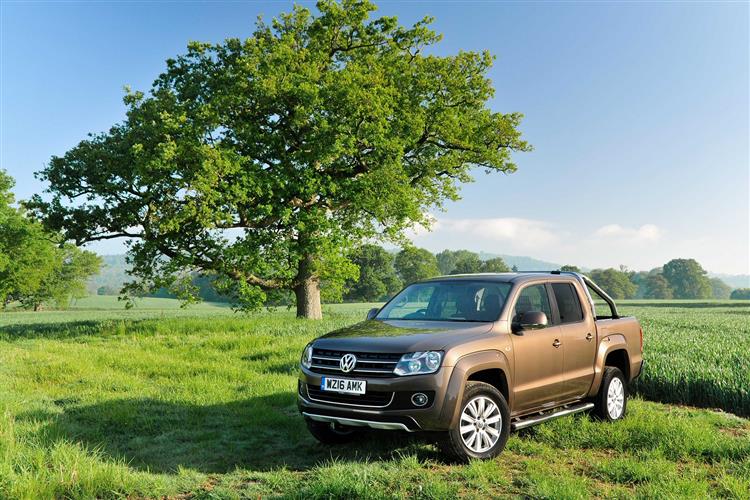