If you're interested in a secondhand version of the first generation Vauxhall Insignia, the post-2013 facelifted version is a much better bet. It was given smarter looks, a classier cabin, hi-tech features and a more efficient engine range, enhancing its already impressive CV for success in the medium range Mondeo sector. Find a good one and you'll get a great all-round volume D-segment family car.

First launched in 2008 as a more stylish replacement for the uninspiring Vectra, Vauxhall's Insignia was instantly well received, carrying off the coveted 2009 Car of the Year title and racking up impressive sales at the same time as other mainstream brands like Renault and Citroen were struggling desperately in this sector. Beyond the stylish panelwork though, there were a number of issues that began to hold it back as the years rolled on. An interior over-cluttered with complicated little buttons. A suspension set-up too focused on the firm side. And an absence of the kind of hi-tech features becoming commonplace on many rivals. All of that needed sorting - and sure enough was corrected in the smarter-looking and much improved model we're going to look at here, launched in the late Summer of 2013. This offered buyers a more inviting and up-to-date cabin, a more compliant suspension set-up and a pretty complete rosta of gadgetry. It sold until the second generation Insignia Grand Sport and Sports Tourer models were launched in the Spring of 2017.

What You Getword count: 742

The Insignia was one of the very first Vauxhalls to feature Design Chief Mark Adams' so-called 'new form' philosophy that was subsequently carried forward across the brand's model line-up. The result from the beginning was quite a handsome car, with a look Vauxhall always liked to describe as 'sculptural artistry meeting technical precision'. Nevertheless, by 2013, it was time for an update, though nothing too radical: in fact, there were no sheet metal changes at all. Instead, buyers got detail improvements front and rear that aimed to bring a wider and lower look to the hatch, saloon and Sports Tourer estate bodystyles that, as before, made up the range. That's certainly the feel delivered by this facelifted model's smarter front end, with its smarter high-gloss chrome grille and thinner logo bar cradling a prominent Griffin badge, including winglets linking with sleeker gloss black-trimmed headlights. As previously, the tightly pinched lines helped to disguise the bulk of the car and a so-called 'blade' design that was most noticeable in the front doors smartened up the surface areas. Also familiar to original Insignia buyers was the profile, with its smart bowed roofline dropping dramatically towards the rear with the kind of almost coupe-style sweep that characterises other stylish saloons from this period like Jaguar's XF and Volvo's S60. At the back, the chrome logo was mounted lower and extended into the LED tail light cluster. And inside? Well if you're familiar with the original post-2008 version of this model, you'll find that this facelifted version feels a great deal more up to date. The phrase 'button clutter' might have been invented for the earlier Insignia, which featured a dash with so many confusing little knobs and switches that many owners simply gave up trying to figure them all out. With the 2013 update, much of that was tidied up onto an optional central 8-inch colour touchscreen, there to deal with everything from navigation to trip computer read-outs and audio selections, Bluetooth 'phone functions to a series of Vauxhall-sourced apps. The designers also provided owners with a slightly cheap-feeling touchpad behind the gearlever that could accept one, two or three finger gestures for the various operating functions - or the driver could press a button on the steering wheel and activate the whole thing by voice control. More hi-tech could be viewed through the redesigned three-spoke leather-trimmed steering wheel where in the instrument cluster, another 8-inch high resolution display was provided. This one, also optional and framed by conventional analogue gauges either side, is primarily there to show a virtual speedometer but can also be configured to display all sorts of information such as smartphone or audio use - or even navigation. Otherwise, owners of the previous model should feel right at home. It's as easy to get comfortable in this improved model as it was in the original Insignia, thanks to a wide range of seat and wheel adjustment. As for cabin quality, well the materials and plastics used feel slightly nicer too in comparison with what went before. Go for an expensive variant though and you might feel the whole ambience could be a little more luxurious. And back seat space? Well it's easier to get to it if you've a Sports Tourer estate bodystyle: the sloping rear roofline of the five-door hatch version means that on that car, you've to dip your head a little getting in. That model's tapering profile also resulted in the adoption of a lower seat cushion across the range so as to preserve sufficient headroom. If you're really tall, you might find once inside that even this isn't enough to keep your head from brushing the ceiling but ordinary folk should find that space here is reasonable and comfort levels quite acceptable - at least for the two outer occupants. Unfortunately, as with most cars in this class, the middle occupant will be less comfortable, perched on a harder, narrower seat centre section with legs astride a prominent central transmission tunnel. Out back, luggage capacity is class-competitive. The Sports Tourer estate offers a 540-litre boot extendable to 1,530-litres if you push forward the rear bench. Insignia owners going for the hatch variant get a wide, long (though not particularly deep) 530-litre boot, extendable to 1,470-litres with the rear bench down - though the seats unfortunately don't fold quite flat. If you must have the rare saloon version, then the respective cargo bay figures are 500-litres and 1,015-litres. 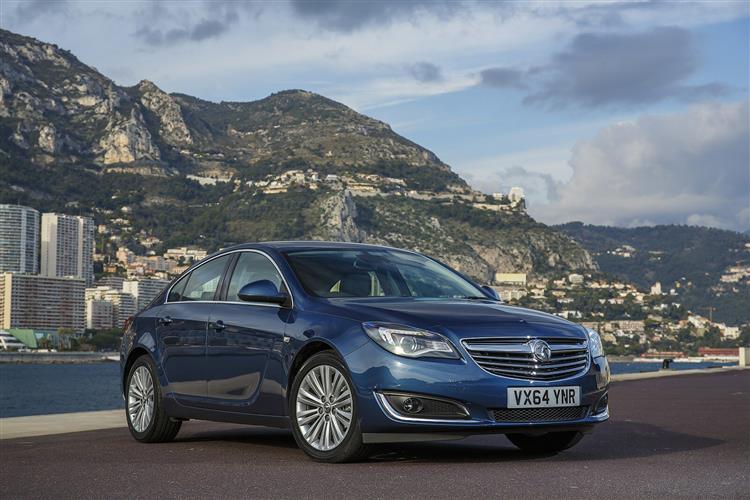