And you thought power was everything. Proof that it isn't comes with Audi's post-2008 third generation S4. Though equipped with less power than its predecessor, it proved to be significantly faster. Perhaps more importantly, it was also greener and considerably more fuel efficient. So you can have your pleasure without so much of the guilt.

If you want something powerful, practical, prestigious and capable of embarrassing the odd Ferrari round the Nurburgring, you tend to think of one car: BMW's M3. It's a great driving machine, but for most people most of the time, Audi reckon they can sell you one that will suit you much better: it's called the S4. Before the purists shake their heads and walk away, let us hit you with a few statistics. This 333bhp post-2008 third generation version is virtually as fast as an M3 from its era, yet is much less expensive and about 40% more economical. Plus it's better equipped and features drive to four wheels rather than two, so in the wet, the BMW driver wouldn't see which way this S4 went. True, you have to do without the glorious V8 soundtrack common not only to an M3 from this period but also, in 344bhp 4.2-litre form, to this car's MK2 model predecessor. That was a great powerplant but even its most committed fan would have to admit that, averaging 20mpg and belching out 322g/km of CO2, it wasn't really an engine to suit these enlightened times. It was a heavy old lump too, one reason why the second generation V8 S4 wasn't appreciably quicker than its six cylinder predecessor, a car with 80bhp less. Hence Audi's need back in 2008 to revert to V6 power for this MK3 model. With a supercharged 333bhp 3.0 TFSI engine developed for the larger A6, the Ingolstadt brand had just the engine for the job. This car sold until a new generation S4 was launched in late 2016.

This post-2008 supercharged S4 doesn't shout about its performance. Yes, there's a bodykit but it's an understated one, combined of course with sports suspension (which sees the ride height lowered by 20mm) and gorgeous 18-inch alloy wheels. Inside, the story is the same, with supportive sports seats which look the part without clamping you in as if you're about to start the Nurburgring 24 hour race. Everything of course is beautifully put together, with an expensive feel that's emphasised by the beautiful leather and Alcantara that's standard on the seats, plus there's brushed aluminium dotted around the cabin and original buyers had the choice of carbon, birch wood or stainless steel mesh for the trim. And of course, this is an inherently practical performance car, with class-leading interior space, especially for rear seat passengers who get decent amounts of head and shoulder room, though legroom might be slightly at a premium for taller passengers stuck behind lanky drivers. Luggage capacity is another S4 virtue. The 480-litres offered by the saloon version is significantly more than a 4-door BMW M3 and, unlike Audi, BMW doesn't offer an estate model of its performance flagship, so you'll have to go elsewhere to match this S4 Avant's 490-litre cargo bay, the capacity of which rises to 1430-litres with the split-folding rear seats flattened. 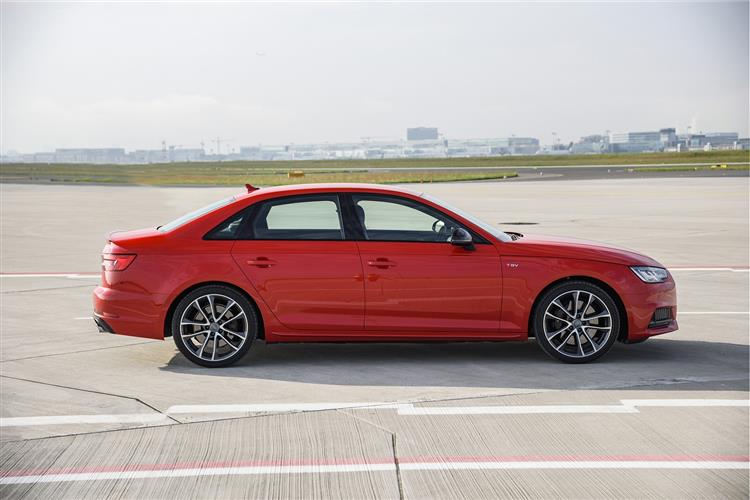