With slicker styling, a much-improved interior, more equipment and better value for money, Nissan's heavily revised fourth generation Micra supermini turned over a new leaf in 2013. As before, it was impressively space efficient and offered the option of a clever supercharged 1.2-litre petrol engine that was not only eager but also both frugal and green. It may be sensible rather than sporty, but this very affordable contender delivers in exactly the areas a small car should. Let's check it out as a used car buy.

Think of a small Nissan and you tend to think of this one, the Micra. It's represented the brand in the supermini segment since the early Eighties, with this fourth generation version taking over the mantle at the end of 2010 before significant improvements in the middle of 2013 brought us the revised model we're going to look at here. The fact that changes were introduced so early in the product cycle underlined how vital it's always been for the brand to get this car right. This is, after all, a very significant model in Nissan's history, in second generation form the very first Japanese design to win the coveted European Car of the Year award, a recognition of its status as the first Far Eastern supermini purpose-built for Western tastes. To make absolutely sure, Nissan decided to build the MK2 model in Britain and style both that second generation version and its successor with a daring flair that perfectly suited the ever-more image-conscious small car market. These were cars perfectly in tune with their times - which in a way, this one was too. It stood as a perfect example of the power of global economics. That was the only way to explain how Nissan managed to make the fourth generation Micra cheaper to British buyers, despite switching its production from Sunderland to India. By 2013, the improved MK3 Micra we're going to look at here was being used as part of Nissan's two-tier approach in the small car segment, taking on budget-minded Korean superminis from brands like Hyundai, Kia and Chevrolet. This freed up the larger Note model to attack more expensive European small contenders in the Fiesta and Polo sector. If you're going to buy a MK4 Micra, this post-2013-era version is the one to have. By this point, quality issues from the Indian factiory had been sorted out and nicer cabin materials were being used in the space-efficient interior. Plus a clever supercharged engine option gave pokey power with diesel economy. This model sold until a revolutionary fifth generation Micra was launched early in 2017.

What You Getword count: 954

Second and third generation Micras were the Fiat 500s of their day, cute, fashionable and loved by the trendy town-based female audience they were aimed at. It's difficult to imagine how and why Nissan could have surrendered that profitable market to its competitors but that's essentially what the original post-2010 MK4 model Micra did, with forgettable looks that lacked the originality this car was originally supposed to represent. Hence, by 2013, the need so soon in the life of this generation model for the stylists to sort things out and put things right. Aesthetically, there was only so much that could be done mid-way through the product cycle but given the inevitable constraints, Nissan's pen people didn't do a bad job of instilling a bit of character back into this car. Fortunately, they had a fundamentally good basic design to work with. Before it became de rigeur for small cars to be small and extremely space-efficient, Nissan was designing the Micra that way and like its predecessors, this one has a short upright shape, arched side windows and a strongly rounded waistline. As for the changes, well, most of the effort of course went into the bit people most readily notice - the front end. The bonnet, the wings, the headlamps and the front bumper were all redesigned and the front foglamps got a different shape and a chrome surround. The most obvious update though, was the corporate grille which on this revised model, cradled Nissan's familiar circular badge within a chromed extended V-shaped motif. It wasn't really especially pretty but it was certainly much more distinctive. There were changes at the rear too. Move past the smarter alloy wheels you'll find on plusher variants and, if you're familiar with this car's direct predecessor, you'll spot a redesigned bumper, restyled tail lamps and a trim panel at the bonnet of the tailgate to create a smoother look between boot and bumper. There were even changes to the look of the roof, where two semi-circular creases aimed to add a little visual drama. But what about the inside? This five-door-only design was after all, one of the smaller cars in its segment in its lifetime. So is it also cramped? Fortunately not. With an average customer age for this model that from new was as high as 54, Nissan's designers knew that getting in and out needed to be an easy process: thanks to wide doors and carefully chosen seat heights, it is. Once inside, there's no doubt that you're in a small car but thanks to the clever wheel-at-each-corner stance and the stretched wheelbase of the so-called V-Platform this car sits upon, the designers were able to make maximum use of every inch of space. The result is that there isn't noticeably less room for four adults than you'd get in any other supermini, a feeling perhaps enhanced by the airy, glassy cabin, with shoulder room in particular rather better than you might expect. Even the 255-litre boot is a respectable size, about the same size as a Fiesta and 52-litres than, say, that of a rival Suzuki Swift. As a result, it's able to accommodate a load like three aircraft hand luggage cases, with another on top. Entry-level variants rather meanly did without a boot light and lacked a split-fold in the rear bench but both things were of course provided in plusher variants. Push the backrest forward and there's 1,132-litres to play with - which is quite a lot for this class of car and another reason why this Nissan shouldn't be thought of as a direct rival to smaller citycars like Volkswagen's up! At the wheel where you sit quite high in front of a sharply-raked windscreen, it's pretty easy to get comfortable despite the lack of reach adjustment for the steering wheel and, on base models, height adjustment for the driver's seat. Couple that with excellent all-round visibility aided by a nose you can actually see from the driver's seat (not a common thing in many of today's small cars) and here's a supermini you feel you could slot in anywhere. It's also as practical to live with as well as to use, with plenty of cabin storage space, including a double-layered glovebox to complement the usual receptacles in the centre console and the doors. The shape of that glovebox is a major part of the so-called 'twin-bubble' cabin design theme, shaped to match a circular binnacle housing instruments that in this revised MK4 model got clearer graphics. More important though, were the more significant cabin changes, most of which were aimed at upgrading the atmosphere from that of a Romanian thrift store, that being the feeling you were left with after a spell inside the very first 2010-era version of this MK4 model. These additions included a trendy black gloss-trimmed centre console, a new gearstick splashed with silver and air vents that were restyled. Materials quality from the Indian factory was better too, with smarter seat and door pad fabrics and a higher quality textured finish for the door armrests. Original buyers who opted for the NissanConnect navigation and communication system also got a dash of hi-tech too. Revised MK4 Micra models fitted with this media system got it displayed on a bigger 5.8-inch screen and buyers found that the set-up could do a lot more, finding them the most efficient route, scoring the green-friendliness of their driving and offering them Google 'Send-To-Car' technology so that they could plan routes on their PCs prior to leaving home before forwarding the instructions on to their Micra. Google's Point of Interest search system was also included, as well as access to things like weather forecasts, local fuel prices and flight information. 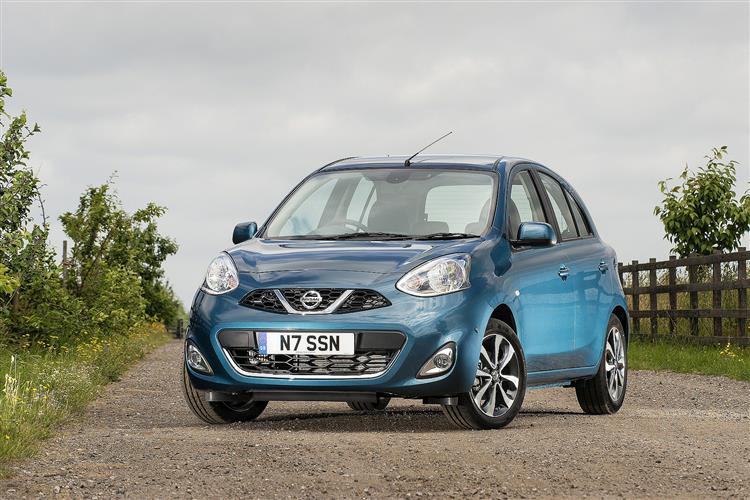