With its fourth generation Rio model, Kia produced a smartly-styled supermini that challenged for class honours and suited sensibly-minded buyers. As a secondhand buy, it's spacious, easy to drive and in entry-level diesel form, very affordable to run. It is, in short, a very competitive car indeed.

In the modern era, some models in the supermini category are for the first time large enough to function as complete family cars. Take, for example, the one we're looking at here, Kia's fourth generation Rio, launched in 2011. It's as big as a turn of the century Astra or Focus from the Family Hatchback segment, the next pricier class up. More importantly, it was the first top class supermini the Korean brand had ever bought us. This was a progression that anyone familiar with Kia had been expecting. The first two generations of Rio were embarrassing but the MK3 model of 2005 was very nearly class-competitive. When the wraps came off the fourth generation version though, it was clear that it was going to be a bit more than that. Here was a car that targeted nothing less than the top of the supermini segment in terms of the things that really mattered to supermini buyers - styling, running costs and everyday practicality. It sold until early 2017, when a new fifth generation version was launched.

What You Getword count: 631

So different was this MK4 model Rio from anything Kia had offered in the supermini segment before that the Korean maker should really have given it a different name. Come to this car expecting lowest common denominator motoring and you're going to be in for a rather pleasant shock. Ex-Audi stylist Peter Schreyer penned a shape that was longer, lower and wider than the previous model with a forward-leaning wedgey look and a pronounced coupe-like roofline. For the first time here, Rio buyers got the option of a three-door bodyshape, though it was still the five-door that accounted for three-quarters of all UK sales. The overall look isn't perhaps quite as distinctive as the brand wanted to believe but it's certainly very neat, with an interesting interpretation of the Kia family 'tiger nose' front grille that integrates nicely with the front headlamp units. There's a distinctive feature line along the flanks flowing into a high-shouldered rear end with a sharp rear screen angle. The rear end could have been a bit better thought through as from the driver's seat, it's not that easy to see out of the back, which is a pity as parking sensors were only supplied as standard on the plushest version. That apart though, there's precious little to criticise inside, unless you've an aversion to black plastic. Even if that's the case, you'd have to admit that the quality of the materials is actually very good for an affordable supermini, even if these can't quite match the standards set by the class best. It's a huge improvement on what went before though, signature features like the so-called 'three cylinder' instrument cluster blending with new ideas like the smart toggle switches on the centre console. There are also nice touches with a moulded insert to prevent your 'phone from sliding around and two 12V power sockets flanking jack points for iPods and USB sticks. A reach and rake-adjustable steering wheel on most models along with the height-adjustable driver's seat means that it's possible for just about anyone to get comfortable too. And it's a more spacious place to be than anything the old MK3 model Rio could offer. This car is, after all, just over 4m in overall length, 55mm longer than a Fiesta, with a cabin 25mm wider than that of the car it replaced. The combination of this and the way that the windscreen was moved forward and upwards to create more headroom gives the interior a feeling of size that you'd once have needed an apparently larger Focus-class family hatchback to rival. It's an impression that continues rearwards where a 70mm increase in the wheelbase created 34mm more legroom, ensuring that there's plenty of room for a couple of fully-sized adults in the back, even on longer journeys. Three would be a bit of a squash, as usual in this class of car, but a trio of kids will be quite happy. In short, here's a car that most who buy something larger in the next Focus or Astra-sized class up would be quite happy with - except perhaps, when it comes to the boot. To be fair, the 288-litres on offer is a 7% improvement on what was available in this car's predecessor thanks to a 100mm increase in width, but it's still 20% less than you'd get in something like a Golf. Still, the Rio's capacity is pretty par for the course in the supermini segment and as usual, you can extend it by pushing forward the 60/40 split-folding rear seats. There's also plenty of cabin storage for smaller items including a large 15-litre glove box, a centre console with three litres of extra capacity and door bins that'll hold a 1.5-litre bottle at the front and a 500ml bottle in the rear. 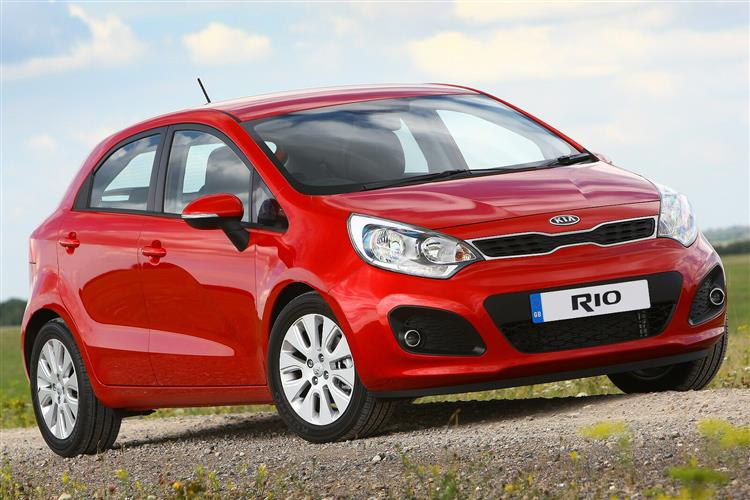