Volkswagen's Golf is the family hatchback against which all others are judged - and never more so than in this lighter, larger, quieter and more efficient seventh generation guise, where it proved to be cleverer and more usable than ever before. If you're shopping for a secondhand example, you might be asking yourself why you should buy one. But perhaps the more pertinent question is whether there's really any reason why you shouldn't.

Volkswagen's modern era 'Peoples' Car', the Golf family hatchback, has been bought by an awful lot of people. Launched back in 1974 to replace the iconic Beetle, it was the car that saved the company through 29 million sales and six generations that by 2013, brought us to this MK7 model. At launch, this was the first truly new Golf we'd seen since just after the turn of the century, the previous sixth generation version having been merely a light re-skin of the old MK5 model. And it arrived at a time when the marque needed to step up its game. Volkswagen's in-house Skoda and SEAT brands were offering Golf technology for less, the South Korean competition was improving and more familiar mainstream family hatch rivals were adding premium quality and technology that, in the words of their marketeers, made them 'more Golf-like'. But, as Volkswagen has always argued, there's no substitute for the definitive article - and this, we're told, is exactly it. Stiffer, plusher, safer, smarter, more efficient and higher-tech than its predecessor, the MK7 Golf model's goals lay far beyond simply being better than a Focus or an Astra. This car aimed to move above that, aspiring to appeal to buyers who might be considering premium-badged compact hatches from brands like BMW, Audi or Mercedes. Not everyone bought into that and predictably, throughout its lifetime, the Golf MK7 sold to people who wanted a nicer version of something Focus or Astra-sized. Volkswagen substantially upgraded this design in early 2017, but it's the original version of this generation model that we evaluate here as a secondhand buy.

What You Getword count: 636

Design-wise, virtually everything seventh generation model changed but in many ways, virtually nothing was different. The same thick rear C-pillar and near vertical tail. The same sharp crease line above the flanks. The same horizontally-barred grille. Look more closely though and important differences begin to emerge. In MK7 guise, this car is 56mm longer and 13mm wider than its predecessor, the idea being to create more interior space. And it was also lower to create a more dynamic stance. The front wheels were moved further forward too, reducing the front overhang, visually lengthening the V-shaped bonnet and moving the passenger compartment a little towards the rear. The result is a gym-toned look that's particularly nice at the side, with the C-pillar design supposed to resemble the drawn string of a bow, giving the Golf a look of acceleration even when it's standing still. Overall then, a confident, assertive piece of design. But it's under the skin where the biggest changes took place, with the adoption of new MQB (or 'Modular Transverse Matrix') underpinnings that helped to shave 100kgs off the weight of this car. And made it possible for the longer wheelbase that facilitates the larger cabin that Volkswagen was determined this 7th generation Golf should have. You notice it most at the back, where there's 15mm more rear legroom than was provided by the MK6 Golf, despite the front seats of the seventh generation model being moved further back to better suit taller drivers. Shoulder and elbow-room are both improved too and headroom's quite adequate, despite this generation design's reduction in exterior roof height. As usual in this class, three adults would be a little squashed across the back seat but a trio of kids will be quite happy. In the boot, there's more space for luggage too, the cargo bay 30-litres larger than it was in the previous model, at 380-litres - that's 10% bigger than an Astra and 20% bigger than a Focus. The designers made this area easier to use too, with probably the lowest loading sill height in the class, a wider hatch aperture and a wider base on the dual-height luggage floor. Fold the 60/40 split rear seats down and you get useful 1270 litres - again one of the bigger spaces in the class. And behind the thinner multi-function steering wheel? Well, nobody does it better than this. It isn't that it feels especially plush - though the quality of materials used is excellent - and far better, incidentally, in this Wolfsburg-constructed Golf than Volkswagen's similarly priced but Mexican-built compact Jetta saloon. It's just that everything is of just the right quality and feels absolutely fit for purpose. The carpet that lines the storage boxes so that your keys don't scrape around on the move. The upholstered material used for the upper section of the dashboard that's lovely to the touch. The central armrest that adjusts for length and five stages of height. The way the gearbox lever has been raised so that it sits more comfortably in your hand. And the option of a 2Zone climate control system that can even adjust itself according to the direction of the sun. Original owners could make the interior feel even nicer by specifying acoustic lighting and contrasting colours for the lower parts of the dash and the doors. For Golf regulars, the biggest change with the MK7 model will be the adoption of the centrally-placed 5.8-inch colour infotainment touch screen that was supplied as standard across the range and which you can control by swiping your finger across its surface as you do on a smart 'phone. In basic form, it allows you to control audio and Bluetooth 'phone functions, but further up the range, it can display anything from 3D navigation to speed limit signs as you pass them. 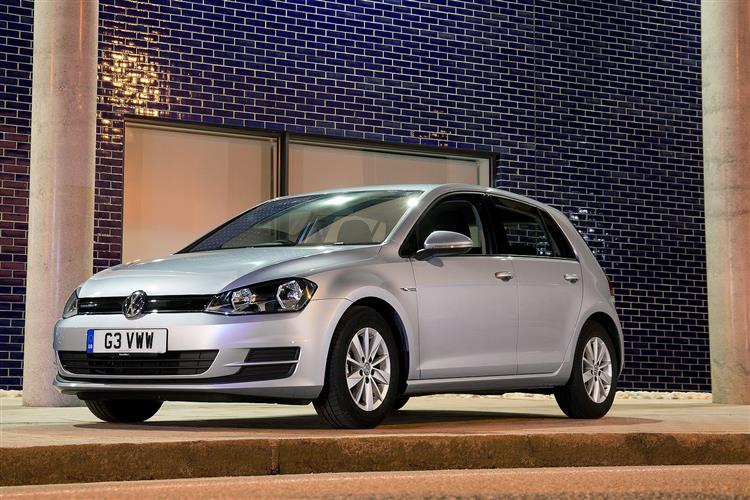