It's an Audi A3 - but not perhaps, quite as you know it. In this case, we're looking at the Saloon version, designed to bring the brand's cool elegance within the reach of those who might find the only slightly larger A4 model a bit of a stretch. We all like the idea of good things in sensibly sized packages. In essence, that's what this is. Let's check out the 2013 to 2016-era version of this particular model out as a used buy.

The compact executive saloon. Every business carpark is stuffed with the things, most of them up-market German-badged offerings like Audi's A4, BMW's 3 Series or Mercedes' C-Class. Cars of this kind are now generations old and have got progressively larger, more sophisticated - and more expensive. So much so, that in recent years, room has been created for a market sector to slot in beneath them. A segment with four-door saloons offering pretty much the same thing, but in a slightly more compact form. Cars like this one, Audi's A3 Saloon. From this variant's launch in 2013, the Ingolstadt brand knew that it needed to sell this one carefully. After all, it's traditionally been true in the UK that any four-door smaller than something A4/3 Series or C-Class-sized tends to get pretty much ignored on these shores. So the marketeers couldn't afford for this three-box A3 variant to be seen as a direct rival for minority sedan players like Volkswagen's Jetta or Volvo's S60. Instead, they had to pitch it as offering almost everything you'd get in their fully-fledged A4 model - but in a marginally smaller package with the option of some more efficient and affordable entry-level engines. The thinking person's compact executive saloon if you like. By 2013, Mercedes had already dipped a toe into this kind of segment with their A-Class-based CLA model, but thanks to its style and technology emphasis, that car cost A4/3 Series or C-Class money. Which rather defeated the object of the exercise. This A3 Saloon, in contrast, though not vastly cheaper than its A4 stablemate, always offered enough of a price saving to offer a cost-efficient alternative to that car for business buyers on the lower rungs of the management ladder. This variant sold until mid-2016, when it was replaced by an updated facelifted version.

What You Getword count: 670

This was the first time a Saloon model had been offered as part of the A3 line-up and, if this variant takes your interest, you'll probably approach it with a couple of ready-made pre-conceptions. Either that it'll be some kind of lightly-shrunken version of the larger A4. Or merely an A3 hatch with a boot added on the back. In reality, neither of these expectations hit the mark. It's very much an A3, but a subtly different one, 11mm wider, 9mm lower and 146mm longer than the kind of comparable five-door A3 Sportback that many likely buyers will probably also be considering. Audi's made this three-box model because it was what customers wanted in markets like China or the US and also because it needed a slightly larger platform on which to base its A3 Cabriolet model. From a style perspective, this design doesn't set out to make the kind of sweeping aesthetic statement you'd get in a pricier rival Mercedes CLA, but it's still a neat piece of penmanship. The headlamps are more tapered than you'll find on an A3 hatch and an emphasised version of Audi's trademark 'Tornado' swage line combines with short overhangs to create a more distinctive profile culminating in the neat way that the C-pillar flows down to meet the gently rising bootline. It'll all blend smartly into the background in the office carpark, exactly as buyers will want it to. More important though, is what you can't see, the hi-tech MQB modular transverse platform that underpins the ultra-lightweight construction primarily responsible for the kind of weight saving that sees this car up to 200kgs lighter than a rival CLA. And practicality? Well, once you've lumped stuff over the relatively high sill, you'll find 425-litres on offer in the boot, 45-litres more than you'd get in a five-door A3 Sportback hatch model. Which is usefully more than you'd get in something like a Volvo S60 but about 10% less than the trunk provided by a rival Mercedes CLA. Despite that, we'd still contend this Audi to be a slightly more practical choice than the Merc because when you push forward the 60/40 split-folding rear bench (freeing up as much as 845-litres), the opening created is much wider and usable. And for rear seat passengers, there's no comparison between this car and a CLA. Coupe-like styling means a place in the rear of the Mercedes is cramped and claustrophobic, whereas in this Audi, it's very different. Three can be accommodated at a squash but the two adults that'll more regularly be carried should certainly be as comfortable as they would be in a comparable A4 saloon on all but the longest trips, though it is true that headroom isn't quite as generous as you'll find in an A3 hatch. What sets this car apart though isn't its practicality. No, it's the feeling you get from sitting behind the wheel. Quite simply, nothing else in this segment can match it, the cabin dominated by an electrically-extending 5.8-inch colour screen centrally positioned on top of the dash. Via this, you can marshal the many functions of a redesigned MMI infotainment system that prevents all but the most vital controls from cluttering up the minimalist dashboard. Just as distinctive are the four air vents, styled to look like miniature jet engines and made up of no fewer than thirty individual parts including bright metal outer rings that are shaped for perfect grip. Otherwise, you've an interior that'll be familiar fare to anybody who speaks fluent Audi design language, everything clear, classy and easily accessible. The instrument panel's styled in a wing-like profile and an electric parking brake switch replaces the traditional - and preferable - handbrake lever so as to free up space for the MMI infotainment system controller by your left hand. Ultimately, what it all adds up to is a cabin that wouldn't be out of place on a car costing twice the price. And how many models of this kind can you say that about? Exactly. 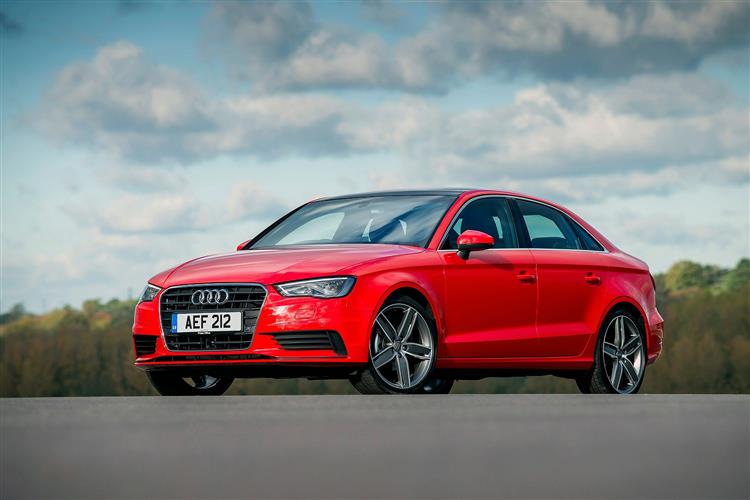