There's nothing quite like a Land Rover Discovery and a 2014 model year package of final improvements for the fourth generation version cemented its position as the most practical and capable choice in the large SUV sector. These updates added extra high-tech equipment, a whole raft of subtle cosmetic updates and a greater emphasis on improved efficiency and lower emissions. The result was an even more compelling multi-purpose proposition that makes eminent sense as a used market buy in this segment.

Without the Discovery model, it's doubtful whether the Land Rover brand would even exist today. Launched back in 1989, the original version merely bolted more spacious bodywork onto an aging Range Rover chassis but the sales it generated were enough to save the company. They also financed a more sophisticated five cylinder air suspended model in 1998 at the same time as the company's engineers were busily beavering away at something much better, the design that ultimately became the improved fourth generation version we're looking at here. This car traces its parentage back to the third generation Discovery3 of 2004, a design vastly superior to anything that had gone before. Until that point, family SUVs had either been very good off road or very good on it. Thanks to its double chassis and air suspended 'Integrated Body Frame' technology, this car could be both and customers loved it. Sadly, there was less sophistication beneath the bonnet and in terms of the variants on offer, customers ended up having to choose between thirsty or slow. Hence the need for the fourth generation Discovery4 model we first saw in 2009. That car at last had a properly performing diesel engine - a 3.0-litre TDV6 unit, quickly further refined and re-badged as an 'SDV6' powerplant. But its heavy underpinnings put it at a disadvantage to more modern German rivals. Some of these Land Rover were able to take on with the second generation Range Rover Sport model launched in mid-2013, but lower-order Mercedes, BMW and Audi SUVs all still needed a competitive Discovery model to keep them honest: this final version of the fourth generation design provided just that. Launched in the Autumn of 2013, it was now known merely as the 'Discovery' and offered buyers greater efficiency, higher-tech equipment and slightly smarter looks. It sold until an all-new fifth generation Discovery model was launched early in 2017.

What You Getword count: 626

You'd have to be quite a Land Rover enthusiast to spot the visual changes that differentiate this updated post-2014 Discovery from the original version of the fourth generation model. That's probably as it should be. The Discovery has its own timeless roadway presence that the Solihull stylists messed with at their peril. So the huge slab-like bonnet, the stepped roof and the wrap effect that characterises the rear side windows - all these things were present and correct when this final version of the 'Disco4' was unveiled for the 2014 model year. The bluff nose was familiar too and there were smarter headlamps, a glossier radiator grille and foglight surrounds, restyled bumpers and more rounded door mirrors. Nothing too major then - but of course, the important changes to this car had been made some time before. In 2004 to be exact when in the design's progression from second to third generation status, 17.6cms were added to the body length. This turned it from a cramped five-seater with two occasional extra berths to a proper seven-seat SUV unrivalled in its segment for space and comfort. Now we're not pretending these foldaway rearmost seats - they're very easy to erect - are where we'd want to be on a very long trip but they certainly provide more space than you'd get in the optional fold-out chairs offered in, say, a BMW X5 or a Range Rover Sport. And are roomier than the standard third row seating you get in an Audi Q7. Two adults will be fine on shorter trips and a couple of kids will be happy here just about any time. Things would be even better at the very back if the middle row bench could slide back and forth so that shorter folk here could help out longer legged occupants behind. Unfortunately, that's not possible, but then to be fair, that's a rare feature in this market segment. What's important is that there's comfortable head and legroom for two and space at a pinch for three, provided the centre occupant doesn't mind sitting with legs astride the rather prominent centre transmission tunnel. And at the wheel? Well how far you climb up into the commanding seat will depend on whether you've set the air suspension in its easy access mode which lowers the car by 50mm to make getting in a touch easier. Once you're in, you'll find a cabin that's a bit like the outside, less sporty and sophisticated and more durable and commanding. Which is not to imply that it isn't very nice indeed. True, the speedometer's a little hard to read, without numbering in 10mph increments. And the infotainment touchscreen that on all but base-trimmed models dominates the centre of the dash is a little cluttered and complicated to use until you get used to it. Having said all that, the cabin quality is certainly a good few notches nicer than it used to be, with stitched leather and soft-touch plastics much in evidence. And there are lovely touches like the rotary chromed Jaguar-style gear lever that rises elegantly out of the fascia on start-up, just in front of the Terrain Response panel that takes pride of place at the base of the centre console. The cargo bay is accessed via a neat asymmetrically-split two-piece aluminium tailgate, so in true Range Rover style, you can use it as a picnic seat or a viewing platform, plus there's the added advantage that you need only raise the top part if you're putting in small items. If you're accessing the whole luggage area, there's 280-litres if all three seating rows are in place, 1192-litres if the third row seats are folded and a class-leading 2,558-litres if both second and third rows are flat. 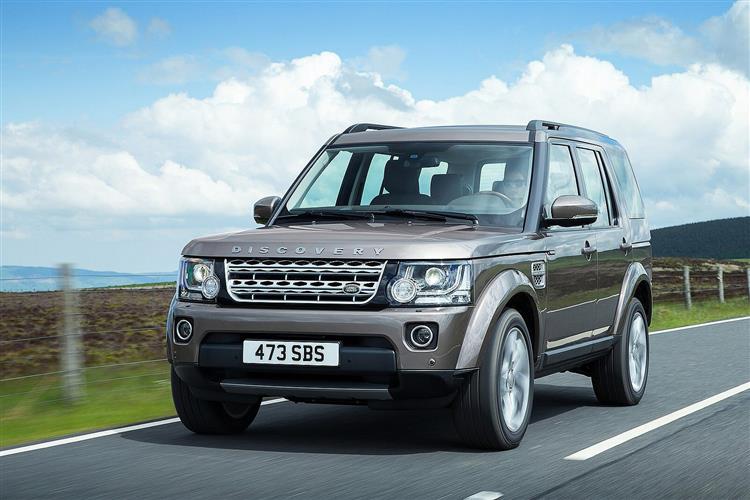