Renault was the first brand to properly meet the needs of compact MPV buyers wanting seven seats. The design in question was the French brand's Grand Scenic model, a People Carrier we're looking at here in the further facelifted second generation form that was sold between 2013 and 2016. In this guise, this dependable MPV continued to offer a smarter spin on a well established theme. Practical, safe, quiet, comfortable, efficient to run and relatively affordable, it still ticks a lot of boxes.

When it comes to cars, established market categories are all very well, but sometimes, they just don't suit the lives that many of us lead. Take People Carriers. Or, more specifically, let's take this one, this much improved second generation version of Renault's seven-seat Grand Scenic that was sold between 2013 and 2016. MPVs have always been 'A Good Idea' for families but it wasn't so long ago that buying such a car was a question of choosing between two extremes. In selecting a People carrier, you either went for one that was so huge you were hardly likely to ever use all its capacity. Or one so compact that trying to cram in a family of seven and even some of their luggage ended up being a contortionist exercise in logistics. Predictably, it was the innovationists in the MPV market, Renault, who first recognised the problem and back in 2004, launched the first generation version of the Grand Scenic, a car built around a 'Goldilocks principle' further perfected by the second generation version originally launched in 2009. Namely, that of a People Carrier that wasn't too big and wasn't too small, but was just right. You'd think that getting such a balance right would be fairly straightforward wouldn't you? Not a bit of it. The trend for making compact MPVs more family-flexible by equipping them with seven seats began around the turn of the century with cars like Vauxhall's Zafira. But the problem was that the models in question were made no bigger to cope with their extra potential passengers, so often felt terribly cramped. That was why the original first generation version of this Grand Scenic was so significant. It was the first compact people carrier to feature an extended wheelbase big enough to make the third seating row actually usable - without creating a vehicle that was too van-like. Like Renault's previous people carrying innovations - the Espace of 1985 and the Scenic of 1999 - this one was quickly copied by other MPVs also aiming to offer a better family balance between size and wieldiness, most notably the Ford S-MAX of 2006. Renault countered that car by launching the original version of the second generation Grand Scenic three years later, but the competition kept on coming: Peugeot's 5008 in 2010, Vauxhall's Zafira Tourer in 2012 and the MK2 Citroen Grand C4 Picasso in 2013. Still, the Grand Scenic did its best to keep up, with an update in early 2012 quickly followed by a more far-reaching package of changes in the Spring of 2013 that created the smarter, more efficient version we're going to review here as a prospective used car buy. It sold until the arrival of an all-new third generation model in late 2016. 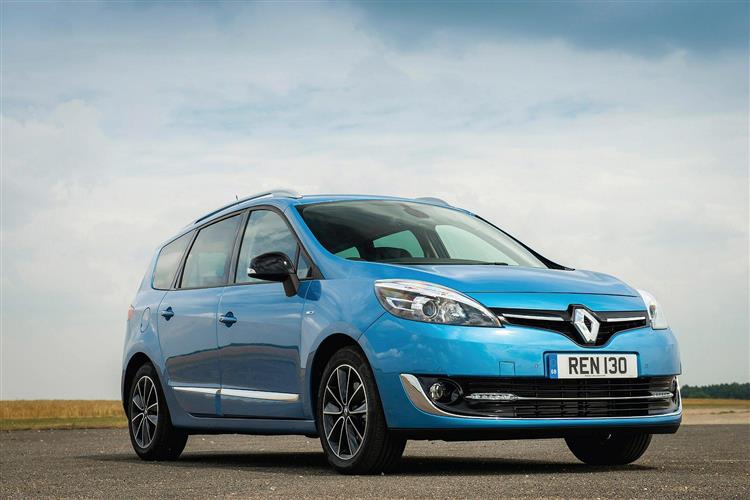