The post-2013 version of Mitsubishi's little Mirage was a rational, no-nonsense five-door petrol-powered hatchback that aimed take on both Citycars and Superminis in the most compact and affordable segments of the small car market. It isn't supposed to be dynamic and luxurious but it is affordable, spacious and very cheap to run. Potentially then, worth a look as a sensible and under-rated choice.

Looking for a small car? Maybe a second vehicle that'll be a family runabout. Or a no-nonsense little hatch that'd be perfect for older or younger buyers. Ideally, let's say you want five doors. And you'll certainly be prioritising very low running costs. With all this in mind, as a used car buyer, you might very well be torn between the two compact categories the industry offers: Fiesta-sized superminis. And smaller Fiat Panda-sized Citycars. So what about a model that claims to offer the best of both worlds, sized so it's almost as big as a supermini, yet offering the super-low running costs and affordable up-front pricing of a tinier Citycar. What about one of these, the post-2013 version of Mitsubishi's Mirage. You haven't heard of it? Then you're not alone. Which is disappointing for Mitsubishi since when it turns its hand to compact little cars, this Japanese brand tends to do them rather well. Not that this happens very often. Prior to this Mirage model's arrival here in the Spring of 2013, you have to look as far back as 2004 to find the last time this manufacturer brought an all new design into the small car sector. Then, it was the very under-rated Colt model which struggled to make its mark against much higher volume Fiesta and Corsa-class rivals in the volume supermini segment. With this Mirage though, Mitsubishi tried to be a lot cleverer. The company's sales volumes don't really justify the provision of separate Citycar and Supermini designs, so the Mirage development team instead tried to bring us a car offering the best of both, with space and low running costs beautifully combined. Buyers were unconvinced though, so Mitsubishi substantially revised the car in mid-2016 to create the Mirage Juro, a better-looking, better-equipped version of the original design. It's the earlier 2013-2016-era model we're going to look at here though.

What You Getword count: 826

Even if you didn't know that the Mitsubishi design team had set out to style the most aerodynamic small car you can buy, you might guess the fact from a look at this Mirage. Everything about the shape - the front grille with its minimal opening, the wind-cheating front bumper, the deeply sculpted sides - all of it's there to optimise a slippery airflow and though the result certainly isn't the most distinctive look in the citycar sector, it's one that effectively achieves its objectives, with a 0.27Cd drag co-efficient that embarrasses boxier rivals. Even the rear spoiler fitted to 1.2-litre models is there, not because the brand wants the car to look sporty but to play its part in propelling the car through the air as efficiently as possible. The sharp edges you'll find at the rear of the cabin area and on the rear bumper aim to do the same thing. You may feel that the overall effect is somewhat reminiscent of a small car from the Noughties and if so, that's an impression that'll certainly be emphasised once you take a seat inside. The cabin lacks the soft touch plastics and trendy design touches common to more recent superminis, say Peugeot's 208 or Renault's Clio. Nor can it match the inspired interior design of modern three-door citycars like Fiat's 500 and Vauxhall's ADAM. But hold on: we need to be comparing apples with apples here. This Mirage wasn't aimed at - or priced against - either of those two sections of the small car market. And few of the practical five-door citycars it actually was designed to compete with - Chevrolet's Spark, Suzuki's Splash and Fiat's Panda for example - are really that much nicer from behind the wheel. To be fair, Mitsubishi made some effort to smarten things up with the glossy piano black finish applied to the fascia's central panel. Ultimately though, simplicity is the keynote here, both to save weight and to improve functionality. The driving position's quite good, though it's a pity that the steering column doesn't adjust for reach and that the 1.0-litre model does without the height adjustable driver's seat that improves your comfort on plusher models. What we do like though, is the way that the front-end design allows the driver to see right to the end of the bonnet, so making it easier to park. The low beltline improves sidewards vision too. In-cabin storage consists of three cup holders, pockets in the front doors, a deep storage tray at the base of the centre stack and a reasonably sized glove box with a small tray above it. And build quality from the Thai factory seems pretty good. The rear part of the cabin is equally featureless, but for all that extremely impressive in the amount of space it manages to offer given the diminutive exterior dimensions. This really is where the Mirage plays its trump card, with more rear seat legroom than the old Colt model, which in theory was a bigger car. Essentially, what you're talking about with this Mitsubishi is Fiesta supermini standards of space at citycar prices. Two adult six footers could be seated here with a child in between them: and they could be seated behind similarly lanky front seat passengers. Name us another car in the citycar segment - name us another car at this affordable price point - that can do that. Mind you, any car designer can increase rear seat capacity in a model of this kind simply by cutting down on boot space. Is that the case here? Well no, not really. Once you get your bags over the pretty high loading lip, there's 235-litres on offer, a little more than a rival Fiat Panda: a little less than either an equivalent Nissan Micra. But importantly, between 20-40% more than cramped rivals like Chevrolet's Spark, Suzuki's Splash and Kia's Picanto can offer. It's true that the single citycar design we know as a Volkswagen up!, a SEAT Mii and a Skoda Citigo offers slightly more bootspace: but it's only 16-litres more and on the down side, those three cars have the huge disadvantage of only being able to offer two seatbelts in the back, which instantly takes them off the shopping list of families with three kids. The Peugeot 107/Citroen C1/Toyota Aygo citycar design suffers from the same problem, along with the added issue of its boot being only half as big as that of this Mitsubishi. And of course, if you need more space in your Mirage, you can push forward the rear bench. In some small cars - Vauxhall's Corsa and Fiat's Panda come to mind - you have to pay extra for this to be a 60/40 split-folding affair but here, that feature's standard across the range. When flattened, 600-litres of capacity is revealed if you load up to the windowline and there's 910-litres if you're able to load up to the roof level. 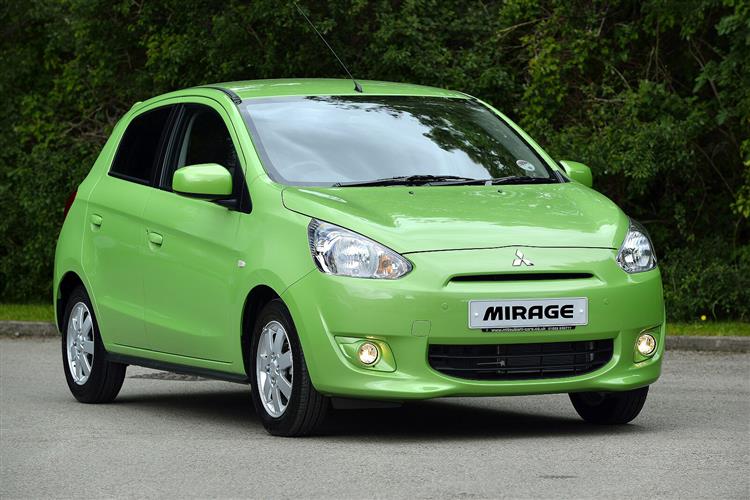