The Sportback. Audi-speak for 'five doors', a configuration in which the brand's A3 compact premium hatch is at its most popular. Sure, for the same money, you could consider buying a bigger car from a lesser brand, but after trying this one, Audi hopes that you won't want to. Let's check out the original third generation version of this model, produced between 2012 and 2015, and decide on its merits as a used buy.

Brand Loyalty. It's hard to put a price on it. Hard at least, if you're a consumer. Audi though, has no such qualms and has always confidently pitched this car, the A3 Sportback, as the priciest of all the compact family hatches that the Volkswagen Group sells. There's a reason for this, just as there's a reason why Audi brand loyalty will see a huge proportion of buyers for this car being customers satisfied with previous versions. Explain to these people that the same technology could be theirs for several thousand less in a Skoda Octavia and you'll be met with looks of puzzlement wondering why such a fact could be relevant. There might be some smug satisfaction though, in their knowing that such a Sportback model would cost hardly any more than a comparable Volkswagen Golf. Though there was a five-door version of the original Audi A3, a bodystyle introduced to the range in 1996, the line-up only gained the 'Sportback' tag in second generation form in 2004 when five-door A3 motoring was repositioned for a slightly more mature, slightly more up-market audience. The third generation A3 range, launched in 2012, continued that trend, Audi's argument that this was more than just a three-door A3 with a couple of extra doors supported by this Sportback variant's longer wheelbase. The original version of this MK3 model A3 Sportback lasted until mid-2016, when it was replaced by an updated and lightly updated version. Here, we're going to check out the third generation car in its pre-facelifed form.

What You Getword count: 721

As was Audi's intention, this five-door Sportback looks a little more mature and grown-up than its three-door counterpart in this MK3 model guise. And like that car, the detailing is beautifully done with a third rear side window added to the profile emphasising the wide, powerful C-pillar. Initial impressions that this car looks little different from its MK2 predecessor evaporate the closer you look at the taut, pretty bodywork. It's all built around what Audi calls a 'tornado line' that visually presses the car down onto the road, this a sharply drawn crease beginning at the headlights and extending in a curve over the wings, doors and side panels to the tail lamps. More important though, is what you can't see, the hi-tech MQB modular transverse platform that underpins the ultra-lightweight construction responsible for a weight saving of up to 80kgs over the previous design. That's equivalent to losing the weight of a fully grown adult, with benefits you can readily imagine in terms of performance and efficiency. And all of this despite the fact that this is a bigger vehicle than its predecessor - or at least it is inside. The length, width and height of this Sportback are actually pretty much the same as they were in its direct predecessor, but a 58mm wheelbase increase means that it'll feel usefully larger in the cabin Something you notice most when you're trying to load the thing with luggage. The 35mm increase in wheelbase that this Sportback enjoys over its three-door counterpart is responsible for a luggage capacity that rises from 365 to 380-litres. The cargo floor is flat and the opening between the wheel arches measures fully 100cms, so you might well find yourself being able to fit in more than expected. You've certainly a more versatile trunk space than the previous generation version of this car could offer, thanks to a neat floor that can be re-positioned at different levels, depending on the height of the load you have to carry. There's also a space beneath the cargo area for smaller items and extra functionality promised by useful options like a load area organiser (to separate your eggs from your Iron Bru), a ski hatch and a reversible load mat with a tougher side for boots and muddy dogs. Plus of course, as usual, you can push forward the split-folding rear bench for extra capacity - in the case of this Sportback, as much as 1,220-litres, 120-litres more than can be offered by the three-door. As for rear seat passenger space, well that wheelbase increase means that this Sportback is certainly the A3 variant to choose if you'll regularly be using the back seat. Even a six-footer sat behind an equally lanky driver will have plenty of leg and headroom. This rear bench can just about seat three adults but, as is inevitably the case with this class of car, two will be much more comfortable. What's certainly not in doubt is that there's a little more room here than there was before, especially with regard to headroom. What sets this car apart though isn't its practicality. No, it's the feeling you get from sitting behind the wheel. Quite simply, nothing else at the same kind of price point can match it, the cabin dominated by an electrically-extending 5.8-inch colour screen centrally positioned on top of the dash. Via this, you can marshal the many functions of a clever MMI infotainment system that prevents all but the most vital controls from cluttering up the minimalist dashboard. Just as distinctive are the four air vents, styled to look like miniature jet engines and made up of no fewer than thirty individual parts including bright metal outer rings that are shaped for perfect grip. Otherwise, you've an interior that'll be familiar fare to anybody who speaks fluent Audi design language, everything clear, classy and easily accessible. The instrument panel's styled in a wing-like profile and an electric parking brake switch replaces the traditional - and preferable - handbrake lever so as to free up space for the MMI infotainment system controller by your left hand. Ultimately, what it all adds up to is a cabin that wouldn't be out of place on a car costing twice the price. And how many models of this kind can you say that about? Exactly. 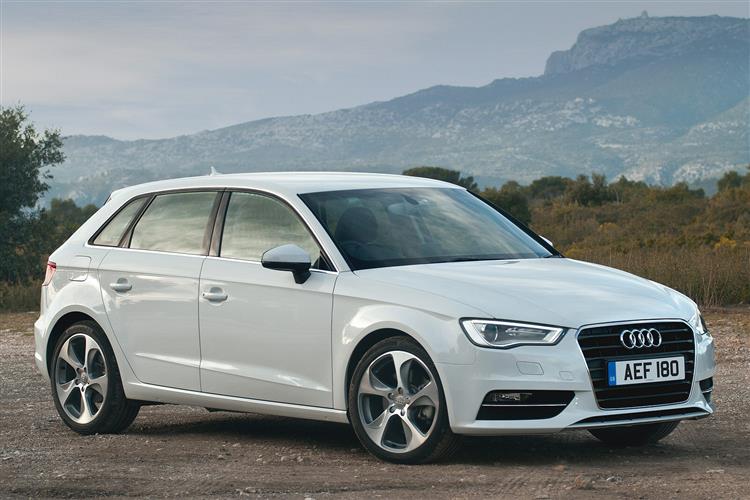